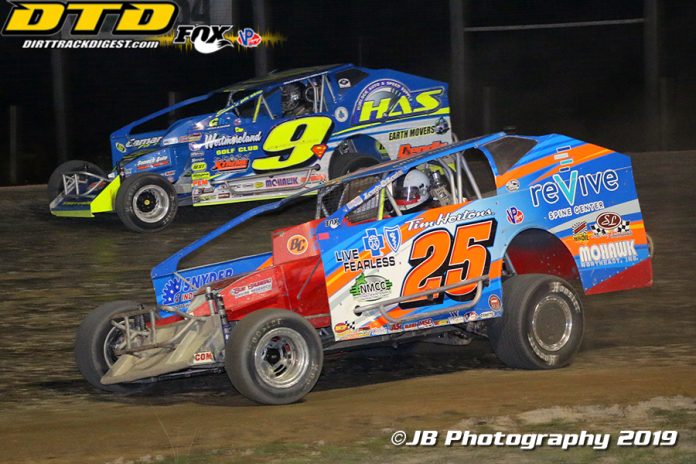 After a full weekend of racing and ministry I went back to work Monday fulfilled and exhausted. It reminded me of the saying I heard from someone that said “I’ve got to go back to work to get some rest”. Regardless, Brewerton Friday, Fulton Saturday, and Utica-Rome Sunday all had great shows.

Friday Jim Witko started on the outside of the front row in the Tracey Road Equipment Dirtcar Modified 35 lap feature. After chasing Roy Bresnehan for several laps Jim made a pass that stuck, and drove away to end a two year drought, earning his first Brewerton Speedway win since 2017. He became the 9th different winner in ten races at the track. With Ron Davis III and Tyler Trump finishing second and third respectively. Witko attributed his run to the investment he and his wife have made in a new car and motor. As a family team with only he and his wife Barb funding and wrenching, plus towing all the way up from Clark’s Summit PA, it was great to see the pure joy and raw gratitude he expressed in his victory lane interview.

Kevin Root raced his way to the front of the 25 lap DOT Foods DIRTcar Sportsman feature to claim a long sought after win in defense of his 2018 track title. Mike Mullen won the US Air Force 20 lap Mod Lite feature, with Chris Bonoffski winning the Four Cylinder feature.

Saturday I sat in turn four in the stands with a good friend and his wife to enjoy the racing at Fulton. The 35 lap Tracey Road Equipment DIRTcar 358 Modified feature went green to checkered with Bobby Harrington becoming yet another winner on the high banks.

Chad Homan worked his way through the field in the 20 lap RUSH Late Model feature to win another one at Fulton. The E&V Energy Novice Sportsman winner was Cody Manitta. Alan “Whoosh” Fink jumped in a junker and won the Trailer Race to take home a thousand dollars.

Sunday I went to the Jan Corcoran Memorial Big Block/Small Block shoot out at Utica-Rome. The field of Modifieds was evenly balanced with 10 small-block cars and 10 big-blocks. The 50-lap Main event appeared to be a runaway by Danny Varin in the early laps as his lead opened wider and wider as the laps ticked down. That wasn’t to be the case as Erick Rudolph flew through the top ten from his tenth starting spot. Meanwhile, Matt Sheppard, who is no stranger to winning at the Action Track, seemed to be off his game as Rudolph set a torrid pace. Sheppard was able to use restarts to gain spots and worked his way up to second place late in the race, but could not catch Rudolph. Rudolph was able to grab two wins at two tracks over the weekend leaving Matt Sheppard in second place both times. Gary Tompkins earned a third place podium finish in the annual Jan Corcoran Memorial.

Matt Janczuk won the Sportsman Special over Kyle Inman and Chris Mackey. Jan Corcoran’s grandson Tyler Corcoran crossed the line with a solid fourth place finish. The Pro Stocks were a little light in count but are never light in action. Nick Stone has been strong at the last 3 events finishing second twice in as many weeks, and winning the 20 lap feature this weekend.

When I ask a driver how their night is going there are usually a few standard answers offered, mostly in jest. One is “livin’ the dream”, and another is “I don’t know yet, ask me later”.

The first, even though most are joking, reminds me of faith, because a dream realized is the result of a vision pursued until it’s attained. The second is the antithesis of faith, because it resounds a lack of assurance in the goal or vision being met. It’s funny to see the contrasting answers that are tell tails of an outcome yet to happen. Those who lack an assurance of their ability or their cars handling and performance usually miss the mark to finish well outside of their hoped for position, which should be to win.

Those who are confident and rest in their abilities usually find ways to make a run for the front of the field. That’s how faith works in the realm of the Spirit. Faith has substance that gives us a foundation to stand on while we believe in God’s ability to deliver the promises He’s made. Faith gives us the courage to rest in God wheel He produces what we’re believing Him for. Faith substantiates our hopes with evidence that God is doing it for us.

As you read that verse did you notice the timeline of the language? “Now faith is” indicates that “the substance” of things exist in the present even though they are still in our hopes. Hope is a deferred expectation yet to be realized, but faith brings the substance of that expectation into the “now”.

Faith is “the evidence of things not seen”. The substance of our faith provides an overwhelming proof that what we’re believing for is already within our grasp because of God’s ability to keep His Word.

If you read Hebrews 11:2-12 you’ll see examples of the result of faith in action, both by God and people. The question many people ask is “how do I get faith?”, or “how can I get more faith?” Paul answered these questions in his letter to the Church in Rome late in the first century A.D.

“So faith comes from hearing [what is told], and what is heard comes by the [preaching of the] message concerning Christ. ROMANS 10:17 AMP”

In another modern English rendering of the same Pauline text it reads: “So faith comes from hearing, that is, hearing the Good News about Christ. Romans 10:17 NLT”

In yet another English text, a more literal version says it this way: “So then faith comes by hearing, and the ear to hear by the word of God. Romans 10:17 JUB”

To put it plainly, faith comes from God as we hear His Word taught or preached expositorially in ways that cause us to grasp it and implant it into our heart. When we hear an anointed speaker teaching or preaching the Word of God, and receive it gladly, our faith is increased. In like manner, when we grab hold of a promise in scripture and speak it outloud over our life it also adds to our faith as the life contained within His Word is released into our life as We hear it spoken, causing us to have full confidence in God to deliver on His promise.

The answer to receiving more faith is found in a Spirit filled local church where the Word of God is at the forefront of sacraments, and Holy Spirit is given freedom to move in and among the people that gather there. Paul was teaching a young Pastor named Timothy about the importance of the local church to the believer when he said “but if I am delayed, I write so that you may know how you ought to conduct yourself in the house of God, which is the church of the living God, the pillar and ground of the truth. I Timothy 3:15 NKJV”

In other words Paul was telling Pastor Tim that the Church was the foundation and main support of faith. Keep in mind he was referring to a gathering of believers led by a specially anointed leader in one of the offices of ministry described in Ephesians 4:11, apostles, prophets, evangelists, pastors and teachers.

Faith grows where God’s Word is sown into the human spirit by these ministers, while being “watered” by the revelation given by the Holy Spirit.

We’re always available to help your faith grow, and to help you believe for the promises God made through His Word. We can be reached by email at flchaplain@windstream.net, or on Facebook at Finish Line Chaplain.