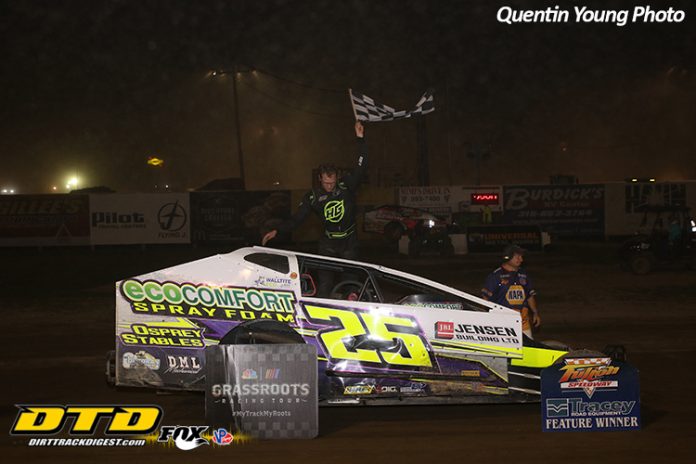 Bobby Herrington probably began to wonder if he would ever be in Fulton Speedway victory lane at any time during the 2019 season.

The Kingston, Ont., 358 Modified driver came out of the box in solid fashion and early on was sitting in second place in points. However, losing two motors sent him to the sidelines knocking him out of contention and then upon return he ran well, but in the past few weeks while being in the top ten his rear-end broke. Then the following week he was right there contending again, but was KO’d by a rather unique problem.

He said, the problem wasn’t obvious and on the morning after he explained, “We did some digging and found the fuel pick up in the fuel cell was clogged up with foam pieces.” This meant a new fuel cell.

On Saturday night it all came together and he appeared to run away for the feature win until the final stages when traffic simply couldn’t be overcome. On the 24th lap he had nearly a five second lead, but never again was he able to go under 18 seconds per lap and won by nine-tenth’s of a second over Dave Marcuccilli.


The 800 pound gorilla was off his back and the soft spoken Canadian celebrated with his crew in victory lane to become the sixth different winner this year in the highly competitive 358 division.

Winning more than one hasn’t happened often this year at Fulton as 20 different drivers have captured Sportsman feature events.

Sure,Matt Janzcuk has five feature wins and a couple of others have managed two, but for the most part repeating has come few and far between. Saturday Matt J. and high point man Jackson Gill duplicated previous victory lanes.

The competition in the division is solid as Zach Sobotka led until the 21st lap when Matt got him and in the second Gill took the lead with two laps left after Jeff Prentice had led the first 23 circuits.

In a career run Kyle Perry ran in the top three throughout for a solid third place finish.

Okay so it was a gimmick, but 25 trailers appeared for the Trailer Race of Destruction in front of one of the largest crowds (possibly the largest) of the season.

There were snowmobiles on trailers, Ski-Doo’s being towed, boats, trailers and even an outhouse. One competitors built his tow vehicle like an old time Modified race car.

This was something like I’d never seen before and probably won’t see again.

This 25 lap event had a little of everything. With both announcers track-side we were sort of at the mercy of the lap counter to determine who was leading. At one time the leader had a two lap lead, but he got passed. A wild end over end flip brought out the red and it was as high speed of a flip that you would ever want to witness with the guys popping out ok. A mini fan flamed up and in the end Alan Fink got the win.

It was sensational and it capped off a fun night with racing done in under three hours and the trailer race taking about 40 minutes from set up to finish. Very few folks left early.

Garrett Rushlow was second with 10 laps to go in the Mod feature, but ended up fifth only to be heartbroken when they weighed his car and he came up light.

Ronnie Davis had a consistent weekend with a third.

A.J. Kingsley eventually ended up fifth after Rushlow was DQ’d at the scales.

Billy Whittaker said he had fun despite a 14th place finish. He was the sponsor of the night and hosted the popular fan fest (which drivers seem to enjoy more than family autograph nights). Hundreds of fans toured the midway as the cars and drivers were out after hot laps. He pitted behind the fourth turn grandstands and spent plenty of time visiting with fans.

Glen Forward had spun a bearing in his care and was running Lucas Heinz machine.

Todd Root also in a different ride with the 11 under him.

Another 50 car night for the Sportsman.

In the LM division Sean Beardsley had the 93 running the best it has all season, but multi time feature winner Chad Homen got him with two laps to go for his fifth win of the season as they went one-two in the 11 car field.

There were 13 Novice Sportsman with Cody Manitta eking out a four-tenths of a second win over Richard Murtaugh III for win number four on the year.

Triple 35’s this week for the Mods and there will be no qualifying heats. Three features for the 358 class will be interesting for sure.

That’s it for this time around. Anything I’ve might have missed second along to foley395@hotmail.com