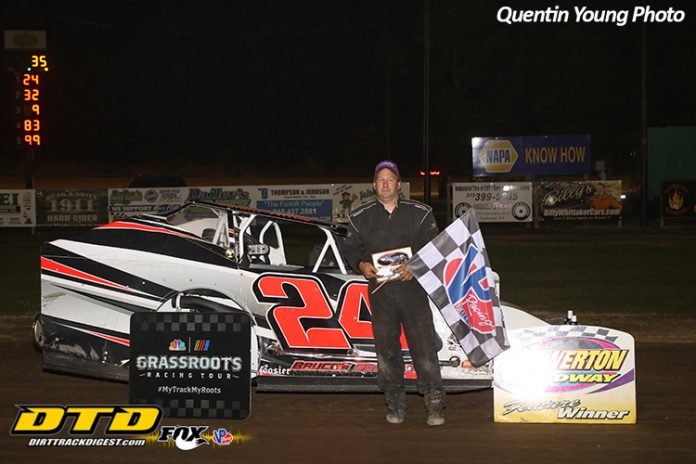 Every Friday they leave Clark Summit, Pa., for the 150 mile trip to the D shaped dirt demon.

This year there haven’t been many fun rides home.

However, that all came to an end on Friday night at the Brewerton Speedway as the stars aligned perfectly. Jim came into the night ranked 14th in the point standings with only a pair of tenth place showings for his efforts thus far this year.


Starting inside the second row and on lap two he passed Roy Bresnahan to set the stage for the next 20 laps as they ran side-by-side, lap after lap with the 02 on top from the fifth lap to the 16th before Witko went on top for good.

Down the stretch it was a heartbreak for Roy as he went from fourth on lap 25 to 12th at the finish. He deserved much, much more.

Around the 20th lap Tyler Trump got to second and he appeared a genuine threat only to have Ronnie Davis ruin his run with an eventual runner-up finish over the 9x.

Witko won by 1.5 seconds and this was a race he was pointing at.

In victory lane he explained, “I took this week off. This is a brand new car tonight. This chassis was sitting in the garage and we put it together for tonight. I have a new motor (C.C. Performance) and have been on the road getting that together.”

Witko is one of those “homeless” drivers who used to spend Friday and Saturday night racing big-blocks, but with the Fulton shift he’s down to one night a week and he does not compete anywhere else.

He becomes the ninth feature winner at The Demon this year in 10 shows.

Collin Dubois had a rocker arm break and despite trying couldn’t get it together for Saturday. He indicated that they would take Fulton off in preparation for next week’s Triple 35’s.

Joe August Jr. had his Kevlar motor have mechanical problems. He noted, “Most likely we will be back to our homemade stuff as we just can’t afford to fix the motor professionally.” It’s sad because Joe and his dad (and sister) have been having the most fun they’ve had in years running as a contender.

Good to see Matt Hulsizer back.

One feature, for the second week in a row, for the Sportsman as a B-Main is being run with close to 36 in the pits.

John Strickler ran the race of his life and was first with six laps to go. He settled for second to defending track champ Kevin Root.

Zach Sobotka was solid as with 11 to go he was 8th and got to fourth with five to go, but settled for a well driven third.

Mike Prentice and Mike Fowler were solid with fourth and fifth.

Mod lites had some trouble as water came out of a yuke tire and was causing handling woes at the south end of the track. The first few laps of the main were simply chaotic, but exciting.

Mike Mullen finally found the speed at the right time for the win, but it didn’t come easily with Bryan Meyers and Casey Sykes applying the pressure throughout.

Justin Williams was fourth while Joe Garafolo went to the rear and rallied for fifth in the 15 car field.

Four Cylinders were wild in the heat action. Jerry Curcie Jr. went full bore up the track between three and four, slammed into the stack of tires protecting the drivers from the corner of the wall, scattered those huge tires all over and his car stood straight up in the air. The nearly half hour delay followed to put those tires, with the help of a huge payloader, back in place before action could resume.

Once again it was a Chris Bonnofski win.

Send along any notes, comments etc. to foley395@hotmail.com