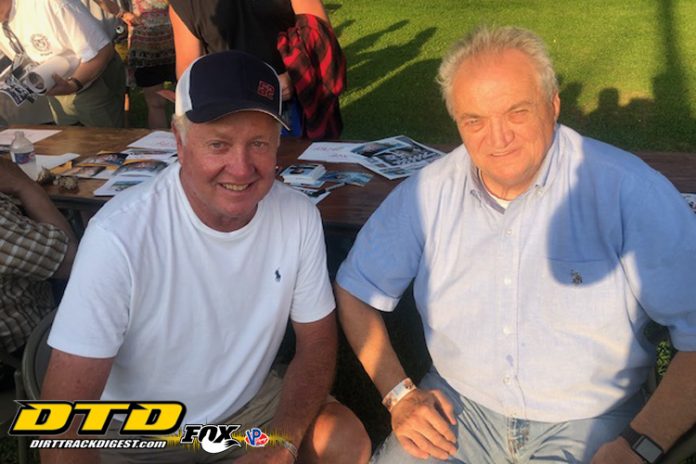 This weekend goes in the books as a weekend of remembering and meeting many long time friends in local racing.

On Friday at Albany-Saratoga for a special night to remember a special friend, John Grady, long time auto racing photographer. It was the second Memorial Nostalgia Night put together by John’s son, Chris to honor his father. Chris started planning this year’s event after last year’s inaugural event with the intention of doubling the turnout of veteran drivers to autograph photos for the long line of fans that had come to see the pioneers of our sport. Ed had the privilege of interviewing a table full of some of the racing greats and if you would like to see those interviews pick up one of the BOBCO DVD’s from this event. Here is a shot of Dickie Larkin and C. D. Coville. We stopped by the pit area of Kale Groff, driver of the beautifully prepared No. 1 Sportsman car. Kale gained much attention a week ago at Devil’s Bowl Speedway in Vermont when he finished second to multi-time winner and champion, Kenny Tremont, Jr. Kale said, “It felt like a win to me.” Kale stepped away from Modified racing nine years ago and just came back this season. He s aid his favorite track is Devil’s Bowl and he also enjoys racing at Albany Saratoga. It’s great to see a driver that does not stop going for the checkered flag even if the driver ahead of him has nearly 400 wins.

Another great addition to the Malta oval is Brian Berger in the No. 60 Modified. Week in week out, Brian is improving on a track that is half the size of his normal racing home, Lebanon Valley’s high banks. Brian just returned to Friday night racing because he has finally got to where his life allows for two nights of racing. He has been busy raising his family and building a career so his racing hobby was limited to one night a week.


Talking with the winner of any feature is, many times filled with great joy. On Friday we spoke with Modified winner, Mike Mahaney and although he was joyful about the victory he was also looking at what it took to get him there, the loss of a $15,000 motor bringing the season total of engines lost to four. One victory lane celebration at the “Great Race Place” on Friday was a stand out. Scott Duell was the winner in the Sportsman feature and Chris Grady was there to present him with a specially designed plaque remembering John Grady. Scott spoke of how when he first came to the track, John Grady was the first to take his photo, because he knew Scott’s Dad, Kim. “And John always came to talk with me when he came to the track, said Scott, something I will never forget.” Scott was truly honored to receive the special Grady plaque. Saturday night was like part two of local racing history. Our stop was at Lebanon Valley for “Legends of the Valley” Night and we could fill this page with the number of veterans that came out for the event. We can only imagine the effort and planning it took to put something of this size together. It began early with vintage cars on display outside the clubhouse and a get together inside, followed by an autograph session behind the stands that lasted over two hours. At intermission all veteran drivers present were brought to the front stretch for a photo and interviews. At the same time some of the veterans were inside the vintage cars lined up on the track ready for their racing events. The MVVDM were in the house on Saturday arriving early to display their cars even in the rain. One of the members of the club, Carl Cram of Hampton, NY brought his 1935 Chevy that he customized for Tommy Corellis with a No. 57 and Tommy’s name on the hood. Carl said, “When I get behind the wheel now all my aches and pains go away.” Carl wanted to bring a smile to TC’s face and that he did as the two stood next to the car before Corellis would hop behind the wheel later in the night. Carl raced his No 99 predominately on the CVRA circuit during the C. J. Richards reign.

One of Lebanon Valley’s true pioneers is now 91 years young; Jerry Townley came to the Legends event courtesy of his grandson, Logan Hall. Logan said, “He wanted to come and I wouldn’t miss bringing him. He always brought me whenever he could.” Andrew Searing’s tee shirt says it all, “Proud grandkid of Lou Searing and great-grandkid of Smiling Fred Searing.” And you could see that Andrew was proud as he stood next to Lou as he signed autographs for the huge line of fans. Two other veteran drivers at the table were Barry Cone and Dick Hanson.

Bobby Albert was with Howie Commander in the clubhouse for this shot. Albert has the unique distinction of being one of the few drivers to win at Lebanon Valley, Fonda and Orange County. The small block modified event ran 17 laps on Saturday in honor of the No. 17, Brandon Pitcher, a competitor in the division who lost his life a week ago in an ATV accident. It was an emotional win for Brian Sandstedt who was a friend of Brandon. J.R. Heffner who finished second, announced before the race that he would donated his winnings to the Pitcher family. Kenny Tremont was the Modified event winner and Rick Dempsey won the special “Old Buzzard 30” Pro Stock event in memory of Jimmy Langenback a long time competitor at the Valley and one that all had great respect for. Special monetary awards were given by NYSSCA to members finishing in certain positions in the event, this was also in memory of Langenback who was a huge supporter of the New York State Stock Car Association during his career.

Rocky Warner continued to add to his win total at Glen Ridge and overall. He won both Modified and Crate Modified features and now his overall win total for the season at all tracks is 17. If you’re interested in Rocky’s record it’s now on the ARRA website. His son Tanner finished second in the Limited Sportsman in his quest for his first win.

Ivan Joslin won the Pro Stock feature at Glen Ridge. Ivan will take some time off for surgery on his ACL after this Saturday night at Fonda. We wish him well and a speedy recovery.

This week we will be back at Fonda on Saturday for Championship Night and the crowning of the 2019 track champions. It should be exciting as always.