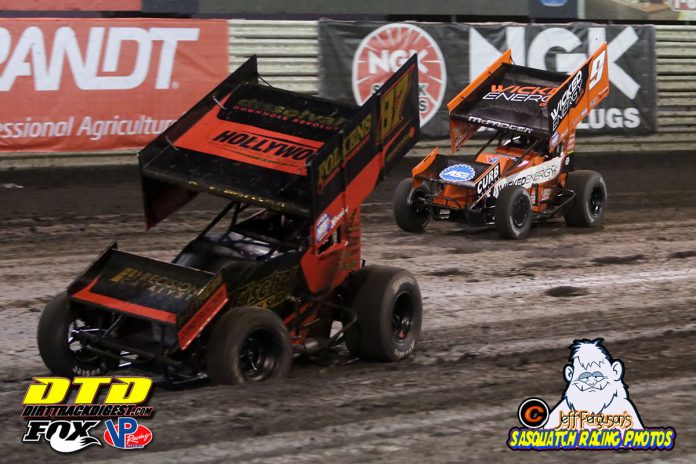 James McFadden was on his game once again at the Knoxville Raceway on Night #1 of the 59th Annual Knoxville Nationals. McFadden put himself in good position to have a shot at making Saturday night’s A-Main with a runner-up effort in the opening 25-lap feature.

A lap 13 caution was the game changer for the Australia native. McFadden was closing in on eventual winner Trey Starks only to have the caution give him back clean air. McFadden knew it was going to be a challenge to get to victory lane from that point forward.

“I was mad at that caution,” cited McFadden. “We had just got by (Mark) Dobmeier there and we were all kind of in a bunch. I was looking forward to that. I felt like in clean we weren’t really going to do too much with those guys. We were just there with them. We made a mistake and Trey didn’t. I was disappointed with the caution because I feel like if that race went longer we had a shot. Could of, would of, should of, it obviously didn’t work for us.”

Sheldon Haudenschild was fortunate just to finish the A-Main Wednesday night, let alone in third place finish. There were several times when Haudenschild made incredible saves during the feature to not spin out. One of them came with three laps to go. As he exited turn two the car got completely sideways and he was looking at the infield. He lost a ton of speed, but didn’t give up a position on the track.

“I think I did it in one and two and three and four,” joked Haudenschild about the near spins. “I just missed the bottom going into one and almost spun out. I think I was looking at the infield photographers for a minute. Then my car got out of high-speed and it took me until the middle of the backstretch to get going.

“That gave McFadden a really big gap on me and gave me a little bit of open track. That might not have been a bad thing so I could see how my car was working. I could move around a little bit. I probably didn’t move around as much as I should have. I probably focused a little too much on the bottom. I can’t have that many mistakes in such a short race.”

Aaron Reutzel ended the night as the high point man with 487 points. He was one of the few drivers that was able to make the run through his heat race to make the A-Main after a very good time trial lap. He finished the 25-lap feature fifth to take the top point honors.

Perennial favorite Donny Schatz did not have a good night. Schatz drew a late pill and timed 10th overall. He missed making the feature from his heat and had to run the B-Main. He just snuck in finishing fourth in the B-Main after the team changed motors. From there he drove forward to finish 11th placing him 10th in points and more than likely in Saturday night’s B-Main.

Like Schatz, Kyle Larson had a miserable night. Larson, who finished on the podium last year, was late in time trials as well. He timed in ninth quick, but also missed qualifying out of his heat race. As a result, he had to go the B-Main. Unlike Schatz, he wasn’t able to muster the speed to get in. Right now Larson has not confirmed if he’ll be able to return on Friday night as he’s 21st in points and has to compete. His NASCAR commitments may cause him to miss the remainder of the event.

Danny Dietrich was quick out the gates in time trials.  Like so many other fast timers, he wasn’t able to make it through his heat race event into the main-event.  He also missed in the B-Main hurting his overall point total.

Freddie Rahmer is making his first trek to Knoxville Raceway.  So far things have been a struggle but he’s improving each time he hits the track.  Last night he missed the inversion for the top eight in the heat races by only a couple of spots in time trials forcing him to start at the back of his heat race.   He finished near the tail which put him on the pole of the C-Main.  He won that before failing to make the charge in the B-Main to make the A-Main.  All-in-all it’s about laps and so far he’s getting plenty of those.