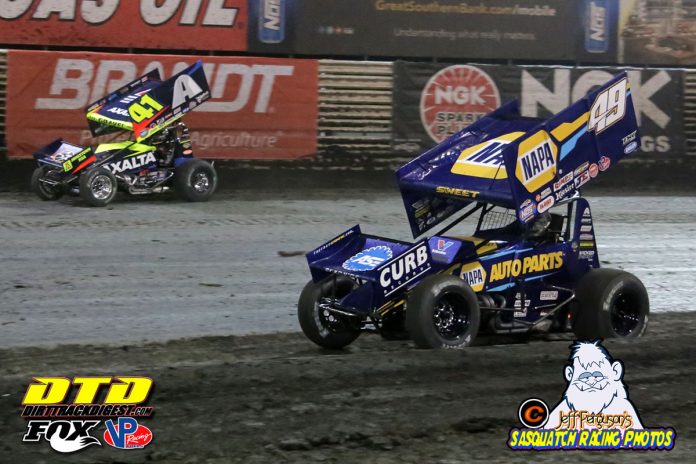 David Gravel continued to show why he’s one of the favorites on Thursday night in qualifying action on Night #2 of the 59th running of the Knoxville Nationals. The Watertown, Conn., driver started sixth, passed Brad Sweet and went on to win the 25-lap A-Main.

The win was good enough to put Gravel on the front row for Saturday night’s 50-lap finale. Gravel will start alongside overall high point man for the week Aaron Reutzel. Just like during the Capitani Classic on Sunday night, Gravel seemed to have a mobile racecar which helped him get through his heat race with a strong second then a win in the A-Main. The low spot was the night was a poor pill draw which put him deep for time trials.

“I will really pissed off to start the night drawing the 71 and it all worked out,” commented Gravel. “This stuff is so tricky. Earlier this year and at the Capitani the pill draw meant a lot. I was really nervous even though we are a good qualifying team this year.

“You never know what can happen in qualifying. Luckily we got a pretty good lap in qualifying and got through the heat race. After that’s it just get a decent finish in the A-Main, don’t mess it up. Everything went our way tonight, other than the pill draw, I’m happy to have a good run for everybody.”

Gravel was consistently good on the bottom throughout the A-Main coming forward from sixth. He worked an interesting line in turns one and two at times. He put the car on the cushion, then dove down to catch the bite off the track in two. When it mattered late, he hunkered down right on the bottom of the track.

“It’s just the way it fell tonight,” he said. “The track was pretty similar to the way it was for the Capitani. There was a little more grip off of four than the Capitani night. It’s one of those things you got to search around and find something that no one else does. Like when Jason won the Nationals, he was able to go high and turn down. I was able to do that a little bit, but I feel like you get to spinning your tires.

“I felt like on the bottom you kept the tires underneath you the best. If you start sliding and searching around you abuse and it probably hurts you later in the race. It’s one of those things you got to constantly try to get better and better because if you stay stagnant somebody is getting better and chasing after you. Just because we won tonight and the Capitani doesn’t mean we don’t need to improve Saturday night to get the job done.”

Gravel had a great race going with Brock Zearfoss throughout the mid-portion of the race. Gravel was able to pass the pole-sitter before Zearfoss went back by. Eventually Zearfoss brought out a caution when the ignition box went south on his No. 70 sending him to the pits and giving him the lead.

Now with two wins in his back pocket, Gravel is looking for the third and most important on Saturday. Two years ago he started from front row of the A-Main like he will on Saturday night. That night ended early with a broken driveline. On Saturday he’s hoping to finally be able to go the whole distance with a shot at victory.

“It’s 50-laps so much can happen,” mentioned Gravel. “Donny has won it from the B-Main before. I feel like this is as good a shot as we are going to have. You never know when you are going to have chances to win the Knoxville Nationals.

“People go on streaks and always have chances like (Kyle) Larson the last couple of years and Brownie (Brian Brown) a couple years before that. They each were in contention to win. All I ask for is a shot to win the race. I felt like when we blew up a couple years ago it got taken from me. I’m not saying I was going to win the race, but I wanted to see how it was going to play out. All I ask for is a chance to win the Knoxville Nationals and hopefully we can do that.”