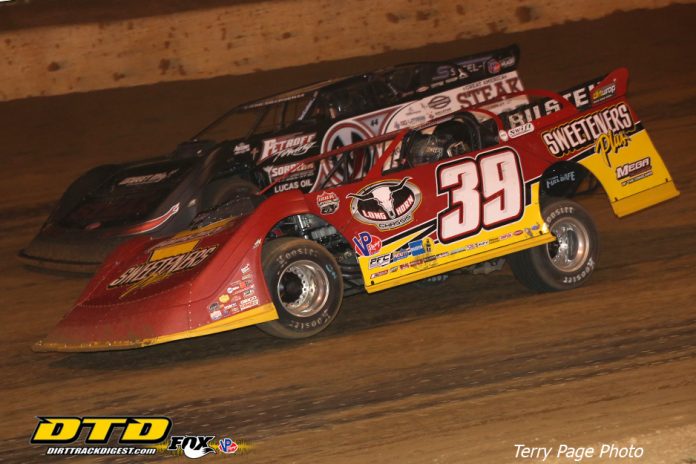 The win marks the South Carolina native’s first Lucas Oil Late Model Dirt Series win of the season and his first ever at Florence Speedway. Madden becomes the thirteenth different winner on the Series in 2019.

Madden started on the pole and faded as far back as fifth in the running order early in the race. Zack Dohm led the first fifteen laps of the 50-lap race before Owens charged to the lead on lap sixteen. Owens went on to hold a comfortable lead until contact with a lapped car sent him spinning out of the lead with 43 laps scored.

Madden inherited the top spot on the restart and pulled away from Tim McCreadie in the closing laps to pick up the win.

In Lucas Oil Victory Lane, Madden was worried at the start of the race. “I went too far on my adjustments for sure. The first 20 laps, I wasn’t as comfortable as I should have been and then searched and found a line that was working. We just hustled the car and got back up there in the thick of things. I got back into second and then Jimmy had a lead on us. I hated to see that happen to him but am thankful for the win.”

“We have been really good in this car,” Madden added. “We now have two wins and a second-place finish. There are a lot of crown jewel races coming up. We got one last week at Cedar Lake and we hope to get one here on Saturday Night.”

“The track was really good tonight. There’s definitely going to be some awesome racing here the next two nights. I want to thank Cody Sommer and Scott [Bloomquist] for giving me this opportunity. Thanks to all of the fans for coming out and supporting us tonight,” said the 44-year-old Madden.

McCreadie came home in second. “This surface and the tire rule just suit me really well here. You just can’t run it through the middle, you just have to maneuver it. Jimmy was doing that; he was running half-way through the middle and then on the bottom. Chris was just a little bit better there at the end. We tried to run that top, but we just couldn’t make up much time on him.”

Dohm, whose father Tim owns one-career LOLMDS win, was looking for his first-ever series triumph. “We seem like we always run good here, but we never have started up front like we did tonight. I was a little shocked when I drove by Chris there at the start and I thought we were setting a pretty pace. I could feel the right rear tire getting hot and it was shoving the car across the track. Coming out of here with a third is awesome. It was just myself and my brother Nick, so we feel pretty good to run like we did against this caliber of competition.”