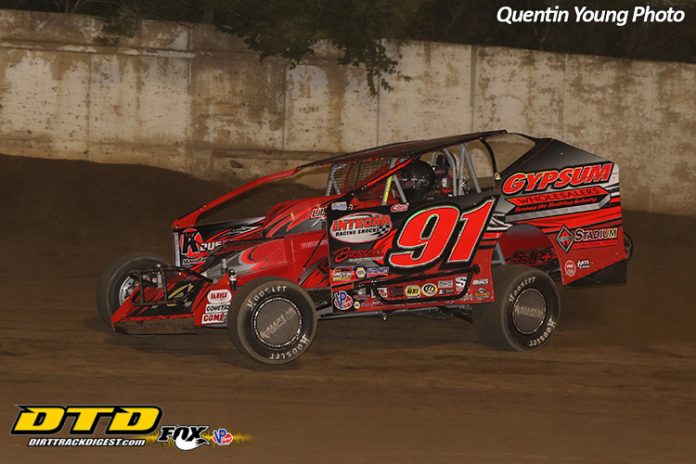 BREWERTON, NY – Billy Decker rarely starts up front in weekly competition, but takes full advantage when he does. Friday night was no different, as Decker led wire-to-wire for his first Brewerton Speedway win of the season.

Billy Decker launched out to the lead at the start of the 35-lap Modified feature, with Pat Ward and Jimmy Phelps slotting into second and third early on. Decker didn’t have much breathing room the opening ten laps, as teammate Ward stuck within striking distance. Behind them, Phelps was under fire from points leader Tom Sears Jr. for the third spot, but kept the position for the time being.

By halfway, Decker had slowly begun to stretch out his lead over Ward, adding a carlength to the gap every couple laps. Phelps and Sears continued to battle for third, but by lap 20, this battle was a straightaway or more behind the top two. With ten laps remaining, Decker’s lead was up to two seconds, while Phelps now had a few more challengers knocking on his door, including Tim Sears Jr., Chris Hile, and Larry Wight. While Phelps was up high the entirety of the race, Tim Sears Jr. found some speed down low, grabbing third by a nose on lap 28.

As expected in a long green-flag run, lapped traffic was coming into play. Decker managed to squeeze through a thick wad of traffic with five laps left, but Ward wasn’t as fortunate. The traffic allowed Decker to pull away over the final circuits, crossing under the checkered flag for his first Brewerton win of the year. Pat Ward claimed second, while Tim Sears Jr., Jimmy Phelps, and Chris Hile finished a distant third through fifth.


“It’s good to be here, been a long time coming,” said Decker. “We were experimenting a bit last week and it showed, but it got us a good starting position this week, and no cautions certainly helped. We’ve been taking swings at this thing and we’re gaining, Scott and the guys have been working really hard and as a group we’re making gains.”

Watson a Winner at DIS