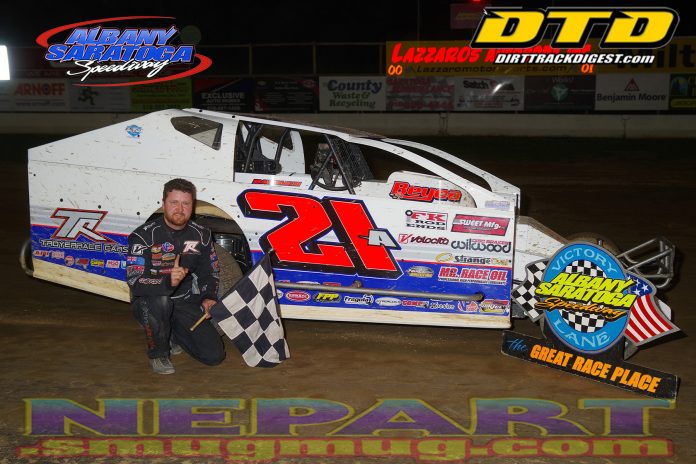 MALTA, NY – Peter Britten has been in the wrong place at the wrong time on several occasions this season at Albany-Saratoga Speedway, but that wasn’t the case Friday night.

Britten finished second in Friday night’s 35-lap modified feature, but was awarded his third victory of the season when race winner Neil Stratton was disqualified after his car failed to pass postrace inspection.

Britten, who had started eighth, was running fourth after 10 laps, and used a restart on lap 12 to move into third. That caution came out when 13-time track champion Ken Tremont Jr., who was in a four-car dogfight for sixth place, made contact with another car in the second turn and wound up on the infield.

By lap 20, Britten had taken over second place, and with six laps left, Stratton, who had started fifth and taken the lead on lap five, found himself in heavy traffic. But when he cleared the lapped car of Kris Vernold, Britten couldn’t make the same quick move, and Stratton had a comfortable lead when he went under Rich Peterson’s checkered flag.

“We had a shot,” Britten said after the race, long before the disqualification became official Saturday morning. “When you’re in lapped traffic, you try to put yourself in a different position than the leader so he if screws up, you can get by. But tonight, the lapped cars ended up hurting me more than they hurt him.”

Kim Duell picked a perfect time to notch his first win of the season in the 25-lap pro stock feature, because the win was worth $1,000 courtesy of Bart Contracting.

Duell started on the pole and led the first 13 laps, before Brandon Emigh used a restart to get the lead out of turn four in lap 14. For the remainder of the feature, the two ran side-by-side, with Emigh up and Duell down low.

But as the laps ticked off, Emigh started to develop a push in the turns, allowing Duell to inch closer each time around. Duell finally got the lead back as the two leaders took the white flag and went on to beat Emigh by 0.341 seconds.

“Damn, I finally got here,” said Duell in victory lane. “I was glad to see the white because I knew Brandon would race me clean.”

The victory was Duell’s 24th pro stock win at Albany-Saratoga, moving him into a tie for second place on the all-time win list with Rob Yetman and Carl Vladyka.

Tim Hartman Jr. took another step toward his second straight sportsman division title, picking up his third win of the season in the 25-lap feature. Hartman Jr. had started 13th in the field, but was up to sixth by the time the first caution came out on lap six. Taking advantage of numerous restarts, Hartman Jr. took over the No. 2 position on lap 12, and quickly put the Parillo Service No. 22 against the cushion. Another restart two laps later allowed Hartman Jr. to take the lead away from Pat Jones coming out of the fourth turn, and Hartman held off Connor Cleveland by 0.569 seconds for the win. Jones was third, followed by Andrew Buff and Mike Coffey Jr.

Dan Grignon drove to his second win of the year in the 20-lap Haun Welding limited sportsman feature. Scott Bennett came off the front row to set the early pace, but by lap six, he had Thomas Van Vorst Sr. and Grignon breathing down his neck.

On lap 10, Grignon went as far outside as he could in the second turn, and rocketed past Bennett for the lead. He also avoided disaster, as his right-side wheels dropped off the backstretch. But he quickly recovered to maintain the lead, and he survived a green-white-checkered shootout with Dave Richer to get the win.

The CRSA sprints made their only appearance of the year on Friday night, with former Albany-Saratoga mini-modified and modified competitor Jeff Trombley chalking up his third CRSA victory of the season. Trombley, bidding for his third straight series championship, started ninth, but only needed nine laps to get to the front. He had been flying from the start in the Warren Alexson-owned sprinter. After a restart on lap five, Trombley tucked against the outside berm and wen from fifth to second in one lap.

Mark “Rowdy” Butch went flag-to-flag in the 15-lap Lake Auto Parts street stock feature to pick up his third win of the season, holding off a late charge from Jimmy Duncan.

In the Greg’s Towing four-cylinder class, David Frame came away with his fifth win of the year, Robert Garney finished second overall, and was the first single-cam car across the finish line. Jim Bleau finished third, Alanna Jordan was fourth and P.J. Cram was fifth.