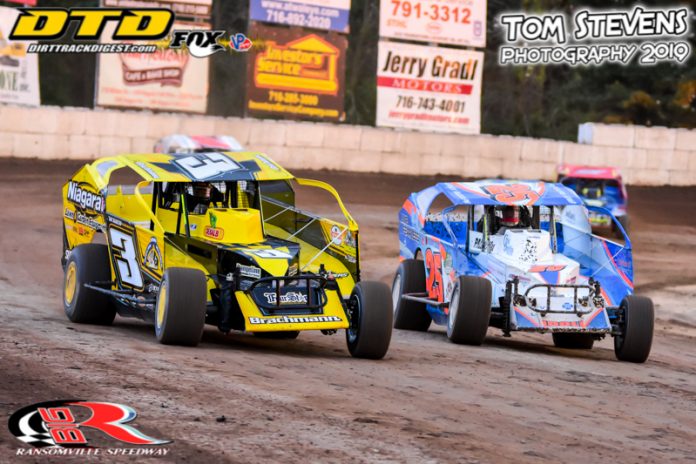 RANSOMVILLE, NY – Chad Brachmann of Sanborn, N.Y. took advantage of the misfortune of some of his competitors to pick up his second-straight Krown Undercoating 358 Modified win on Friday night at Ransomville Speedway.

Erick Rudolph and Mike Bowman led a stacked field of Krown Undercoating 358 Modifieds to the green flag. Rudolph quickly pulled away from the pack with Bowman settling into second and points leader Mat Williamson in third. Williamson started the event with a slim two-point advantage over Rudolph.

Rudolph was in control of the field as he caught lapped traffic by lap 9 of the 30-lap feature. It looked like he was on his way to a dominating win until lap 12 when Jesse Cotriss hit a slick area on the inside of turn one and spun out just in front of Rudolph. The leader had nowhere to go and made contact with Cotriss. Bowman, Williamson and the lapped car of Steve Lewis, Jr. also piled up to bring out the yellow flag for the first time in the event.

With the top three collected in the incident, the fourth place running Brachmann assumed the lead followed by Gary Lindberg, Greg Martin, Ryan Susice and Pete Bicknell. Rudolph and Williamson tangled again on the ensuing restart when the pair locked nerf bars in turn two. Williamson sustained further damage and had to be towed to the pits.


The race resumed with Brachmann and Susice battling for the lead. Susice made several attempts to pull off a slide job pass on Brachmann, but Brachmann carried enough speed on the outside to hang on to the top position.

The final stretch run to the finish saw some intense battles inside the top five. Lindberg, Susice and Rick Richner took turns in the runner-up position. Rudolph was working his way back to the front after his earlier incidents. He got past Susice, Bowman as he looked to try and maximize his points with Williamson in the pits.

Brachmann cruised for the final laps to pick up his second-straight win. The victory moved him to third in the Modified points standings. Lindberg finished second for his best finish of the season at the “Big R”.

Rudolph rallied to finish third. He took the points lead from Williamson, and now has a 23-point lead with three points races remaining. Richner and Bowman rounded out the top five.

Brett Senek scored his fourth of 2019 in the Investor’s Service Sportsman after leading 23 of 25 laps from the fifth starting position. Cameron Tuttle started on the outside pole and led the first two laps before giving way to Senek coming out of turn two on lap 3.

With Senek dominating most of the race, the battle was on inside the top five for drivers, such as, Tuttle, Dave DiPietro, Derek Wagner and Kyle Inman. Wagner was trying to keep pace with Senek as he trailed Senek by nine points at the start of the evening,

Senek drove away to score another win. He has finished inside the top ten in all ten races at Ransomville so far this season. His lowest finish is eighth place. Senek also extended his lead over Wagner to 17 points as he attempts to defend his 2018 track title.

DiPietro finished second for his best run of the season. Wagner came home third followed by Inman and Tuttle.

The Ki-Po Chevrolet Street Stocks had their own share of drama for some of the division’s front runners. Cory Sawyer and Jaren Israel both dropped out of the heat race with mechanical issues. They were able to return for the 20-lap feature, but Israel would drop out with more engine woes.

Pete Stefanski started on the outside pole after heat winner Bryce Richardson developed engine troubles of his own. Stefanski jumped out to the lead early on, quickly establishing over a one second advantage.

Billy Bleich moved into second place on lap 5, and began hunting down Stefanski. He made up the deficit on the leader, and then began to challenge Stefanski for several laps. Bleich had a run to the inside of Stefanski down the backstretch with around five laps to go. The pair collided in turn one, which sent sparks flying.

The race came down to the final turn of the final lap. Bleich cut to the inside of Stefanski as they sprinted to the checkered flag, but came up 0.112 seconds short as Stefanski collected his third win of the season.

The Gippster’s Collision Mini Stocks took part in the sixth round of the Ransomville/Genesee Mini Stock Series. The field featured a good mix of drivers from both tracks.

The 20-lap feature had a wild opening lap as Mike Kramarz drove around the field four-wide from his eighth starting spot to take the lead.

Chris Leone eventually moved his way to the front were he caught Kramarz around lap 6. The pair battled side-by-side for a couple laps before Leone took command of the field on lap 8.

Leone eventually pulled away from the field as the race went caution-free. He cruised to his third win of the season at Ransomville.

Cole Susice finished second. Susice led Leone by 16 points for the series points lead at the start of the race. The pair will battle for the series championship on Saturday at Genesee Speedway. Kramarz, Don Newton and Ryan Plante completed the top five.

In the Stevenson’s Hardware Novice Sportsman, Sam Junkin led all 15 laps from the pole position to earn his first career win. Junkin faced an early challenge from points leader Russ Zimmerman before pulling away late in the event.

Zimmerman stayed on top of the standings with his runner-up effort. Bubby Pawlak, Tyler Vinson and Jordan Moden completed the top five.

Ransomville Speedway hosts another full card of racing this Friday, August 16, as Firth Jewelers and Relco Trucking present Fan Appreciation Night. Race fans are encouraged to show their support for their favorite drivers in the most creative ways possible. Racing starts at 7:15 p.m.