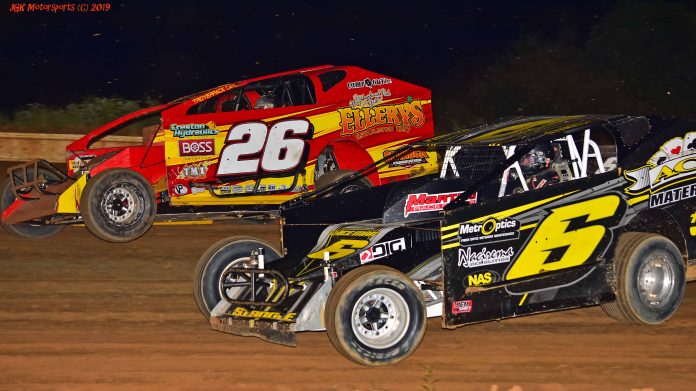 POTTSVILLE, PA – The “Ringoes Rocket” Ryan Godown had enough of being fast every Friday night and not being able to get to the front quick enough to take the win. Friday night Godown was on a mission, the Ringoes, NJ driver went out and promptly won his heat and then went on to dominate the nights 25-lap main event for his second win of the season.

The “Hook” Craig Whitmoyer would lead the Insigner Performance Modifieds to the green flag and take command at the start. Godown is on the move early after starting eleventh moving into fourth as the field completed lap six.

The first stoppage of the race would happen on lap seven when the red flag was displayed after a frightening crash on the front stretch. Loudon Reimert would slow coming out of turn four with a flat tire causing the field behind him to scatter and wreck. The cars of Tim Apgar, Kevin Albert (making his return to the Big Diamond field), Scott Albert and Ryan Krachun all stopped and spread out in front of the starters stand as Bobby Gunther-Walsh torpedoed into the stopped cars. Thankfully all drivers were ok, Gunther-Walsh did go to the ambulance and to the hospital but as learned on Saturday suffered only minor injuries. Unfortunately, the same could not be said for the modifieds of Scott Albert, Krachun and Gunther-Walsh whose cars all suffered major damage.

After the long red flag period, racing finally resumes as Whitmoyer continues to lead the way with Godown now up to second. Lap ten, it’s Godown to the point as he sails by Whitmoyer to take command of the race with Stangle, Billy Pauch Jr putting the pressure on Whitmoyer for second. Lap 12 finds Pauch Jr by Whitmoyer taking over the runnerup spot just as the caution flag waved to regroup the field.

Only the restart it was Godown rocketing away to the lead starting to open an advantage over the second place running Pauch Jr. While Godown was setting sail on the field, all eyes were now on the battle for second as Craig Von Dohren was now up to third and pressuring Pauch Jr for the runner-up spot. The two former speedway champions went at it hard with Von Dohren running the outside as Pauch Jr would stay down low. Von Dohren seemed to have the edge running high but Pauch Jr would be able to hold the advantage as they crossed the line. Finally, on the last lap, Von Dohren made it work as he was able to get by Pauch Jr and finish second. Duane Howard and Whitmoyer would complete the top five.


The annual “Fayash Memorial” was on tap Friday night for the USS Achey Sportsman paying a nice $1750 to the winner. With the extra money available, Brad Brightbill made the tow to Big Diamond hoping to take home the extra cash. At night’s end it was Brightbill standing in victory lane as he held off points leader Doug Hendricks to take the big win.

Two-time winner this season Brandon Edgar would grab the lead from his outside pole starting position and open a big lead on the field. Brightbill starting ninth was moving through the field quickly and was up to fifth after the completion of lap one. Brightbill would move into second on lap five and start to track down the leader Edgar who had built up a commanding lead at this point. With a stretch of green flag racing, Edgar had started to encounter lapped traffic allowing Brightbill quickly gobble up the almost half a track advantage Edgar had built up. Lap fourteen would find Brightbill right on the leader’s bumper and quickly moving by to assume the lead as the caution would come out.

Back to racing and Brightbill takes command and starts to pull away. Multi-time winner Doug Hendricks would be the show now after early race struggles. Hendricks found what he was looking for in his No. 80 and was starting to make a beeline towards the front putting on a show for the fans as rockets into the top five on lap 25. With two laps to go, Hendricks is now up to second but runs out of time to catch Brightbill. Brightbill goes on to take the win with Hendricks, Edgar, Wayne Witmer and Matt Ellery rounding out the top five.

Kody Sites once again was dominate in the Eash’s Towing & Recovery street stock division winning the 20-lap feature event. Sites would take the lead from early race leader Elvin Brennan on lap six and was never challenged as went on to take the win. A fantastic battle behind Sites was raging on for second as Jason Geesemen, Jeff Haag and Chris Derr were going at it fast and furious with Derr winning the battle to finish second. Haag, Geeseman and Brennan completed the top five.

In the Savage 61 Road Runner division it was Chris Holland taking the win after early leader Shawn Mulhall spun out on lap 14. Holland would go to take the victory with Kris Ney, Terry Kramer, Jim Kost and Mulhall the top five.

The Modified heats were won by Dan Hineline, Ryan Godown and Jimmy Reppert.

The Modified consi was won by Rick Laubach.

The Sportsman consi was won by Ed Mrochko.

The Street Stock heat races were won by Chris Derr and Jasen Geesaman.

The Roadrunner heat races were won by Jim Kost and Shawn Mulhall.