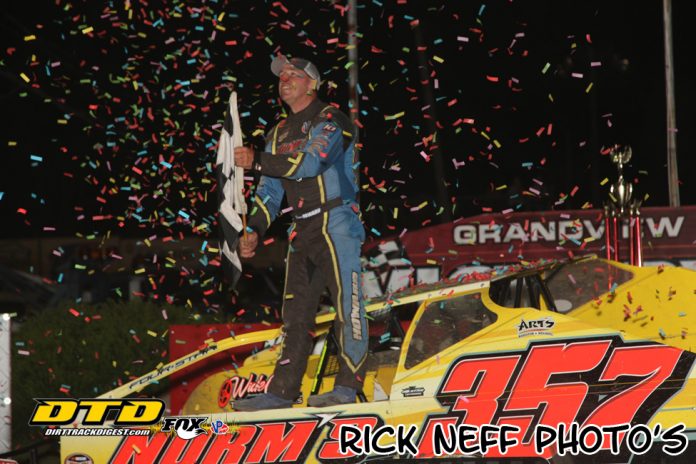 It was close for the five-time champion when Jeff Strunk regrouped the field when he slowed in turn four with a flat right rear tire bringing out the caution with five laps remaining in the 49th annual Rogers Memorial.. Despite a single file restart, runner-up Frank Cozze, who has been struggling this season, was all over Howard giving him a run for the big bucks. At one point Cozze nudged ahead coming off of the fourth turn, but when the lap counted it was Howard in front as the side-by-side action created some paint swapping.

Howard was determined to keep the Norm’s Save Station Bicknell No. 357 mount prepared by the hard working crew ahead in front and he went on to chalk up his fourth win of the season at the 1/3-mile banked clay oval.

Howard was honored to win the 49th running of the special event named in honor of founder Forrest Rogers as he has high praise for the entire Rogers family.

Steve Young won his first feature of the year which was his second career TP Truck Equipment NASCAR 25-lap Sportsman feature leading the event from start to finish.


Providing the feature winners met the necessary requirements, they received monetary awards from T.P. Trailers and a certificate from VP Fuels for product awards. The Dan’s Deli ½-way hoagie award recipients were Howard and Young. Parker Guldin, who finished fifth in the Sportsman feature received an extra $100 from the track for being the first crate engine running.

In the Modified feature polesitter and rookie driver Richie Hitzler took the early lead and set the pace for 11 laps until Ryan Lilick powered into first leaving Howard, coming from the 16th starting grid; Steve Swinehart, Hitzler, who fell back, and Kenny Gilmore jockey for the remaining top five positions.

The lead was swapped for the third time when Howard put the Carroll Hine powered mount into the lead on the 15th circuit.

It didn’t take Howard long to distance himself from his fellow competitors and with 23 laps in the books, he was upon the lap traffic and had to use heads up driving skills to pass them as he realized they were racing for positions also.

Meanwhile as Howard continued his torrid pace the action behind him was hot and heavy between Lilick, K. Gilmore, Cozze and Brett Kressley. Attempting to get into the mix were Kevin Hirthler and Craig Von Dohren, who had to qualify through one of the two consolation races and start 25th.

Gilmore overtook second on the 37th lap and set sail after Howard who had a huge lead built up with Cozze, Kressley and Von Dohren in tow.

Former Rogers Memorial winner Strunk brought out the caution late in the race with a flat tire and after a quick pit stop rejoined the action and was able to muster up a 12th place finish. The single file restart lined up – Howard, Cozze, Gilmore, Von Dohren and Kressley. When action went green again Cozze gave Howard no margin to err as he was right on his bumper. The pair raced door handle-to door handle and it appeared Cozze would put the Tom Umbenhauer-owned car in the lead as he edged ahead slightly, but Howard denied him that chance as he dove underneath out of four to keep the lead when the lap counted. Howard stayed in control and pulled into the winner’s circle to claim the win. Chasing him across the line were Cozze, for his season best finish; Von Dohren, coming on strong in the end; Gilmore, who also posted his best run and Kressley. Rounding out the top ten were Hirthler, Jared Umbenhauer, Lilick, Doug Manmiller, another one that had to get into the race through the consi, and Steve Swinehart.

Positions were constantly being exchanged behind Young, who had a straightaway lead built up by the ninth lap and was now being chased by Guldin, Brad Arnold, Adams and Mark Kemmerer.

Young encountered lapped traffic by the 12th lap allowing Arnold to reel him in.

An infield tire hit by another competitor and pushed onto the track brought out the yellow on the 18th lap erasing Young’s slight edge. The restart was void when Andrew Kreis hit the fourth turn wall with heavy impact and was uninjured. The next try was no better and Kenny Bock found himself assisted into the second turn wall. When another lap finally was recorded, Young was still first, but by now Arnold, Brad Brightbill, the current point leader; Kemmerer and Guldin completed the top five.

A one lap shoot-out was set up when Kyle Smith was sitting sideways along the homestretch infield. Young wasted no time moving out and Brightbill was now in second looking for another weekend win.

Young kept everyone at bay to go on to claim the win followed by Brightbill, for the third week in a row after he made the last lap pass; Arnold, Kemmerer and Guldin.

Arnold, Young and B.J. Joly were the heat winners.

Coming up next at Grandview Speedway is an August 17th doubleheader featuring the T.P.Trailers NASCAR Modifieds and T.P.Truck Equipment Sportsman. Racing starts at 7:30 p.m. with spectator gates open at 5:30 p.m. Adult admission is $15 while youngsters under 12 are admitted free.