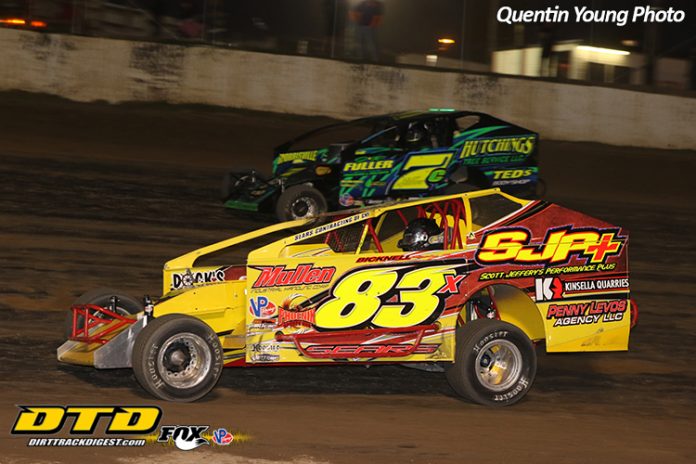 FULTON, NY –  With two rain delayed features from May 25th and June 1st, plus a normal night’s event, Fulton fans were treated to three 35-lap Modified feature events. Ronnie Davis III collected the win in the first event, while Tim Sears Jr. doubled down for two wins later in the evening.

Colin Dubois led Billy Shantel early in the first Modified main, with all drivers standing on the throttle courtesy of a fresh racetrack. Ronnie Davis slid into third in the first circuits, then got by Shantel for second on lap six. Working the bottom, Davis quickly reeled in Dubois and made the pass for the lead on lap ten.

Behind Davis, Tim Sears Jr. was also making headway, reaching third on lap 15. At this time, Davis had stretched his lead over Dubois to nearly four seconds, but on lap 17, Tom Sears Jr. slowed for a yellow. Tim Sears used his uncle’s misfortune to grab second on the restart, knocking Dubois back to third. That’s where Dubois’ good run ended, as he bicycled his car and came to a halt just a lap after the restart.

Larry Wight started 17th, but as usual at Fulton went forward. A much heavier than usual surface proved no problem, as Wight got to third on the ensuing restart. Wight wasn’t done there, as he used the curb that had built up to blast by Sears for second on lap 23.


While Davis ran the bottom all the way around the track, Wight found a lot of speed on the top of turns three and four. Using that lane, Wight inched in on Davis, drawing to within a car length with five laps left. However, Davis was just good enough on the bottom to keep Wight at bay, and also keep Wight from crossing him over down the frontstretch, a move Wight tried multiple times in the closing laps. Coming to the white flag, Wight tried a crossover and nearly got position on Davis entering turn one, but Davis shut down the pass and cut Wight’s momentum. Wight couldn’t get back to Davis on the last lap, and when the checkered flag waived, it was Ronnie Davis III scoring his Fulton first win of the year over Larry Wight, Tim Sears Jr., Dave Marcuccilli, and Rob Bellinger.

Just like the first feature, Colin Dubois was the man out front in the first laps, leading early over Glenn Forward and Tim Sears Jr. On lap five, Dubois got a little too much cushion and hopped over it, dropping to third and handing the lead to Forward. Just after that, the yellow waived for Nick Krause’s spin, and Sears drove by Forward for the lead on the restart.

Following Sears was Dave Marcuccilli, who worked his way into second by lap eight. Once in second, Marcuccilli kept his foot down and reeled in Sears quite quickly, but jumped the cushion on lap 15 and gave up some valuable time. Behind the top two, Ronnie Davis III and Larry Wight had moved into third and fourth, battling hard but a good distance behind the leader. Speaking of the leader, Marcuccilli was once more reeling in Sears as lap 25 hit the scoreboard.

Wight shot a slider on Davis to take third on lap 27, but Davis immediately headed to the pits with motor issues. At the same time, Jason Occhino spun to draw the caution, allowing Marcuccilli and Wight to line up right behind Sears. Despite being reeled in twice by Marcuccilli in the prior run, Sears immediately began to pull away when racing resumed.

As Sears motored away, Marcuccilli was left to fend off Wight. Just as Wight looked to take a swing at Marcuccilli, Wight slowed and pulled into the pits, his race ending on lap 31. Out front, there was no slowing for Tim Sears Jr., who rolled to win in the June 1st makeup feature over Dave Marcuccilli, Rob Bellinger, Todd Root, and Jeff McGinnis.

Fresh off a fourth place run in the second main, Todd Root took the lead early in the third, regularly scheduled event. Jeremy Dygert and Tim Sears Jr. settled into second and third in the early going, but the first of a few critical cautions flew on lap eight, as Rob Bellinger, who finished top five in both features to this point, found the backstretch wall with a broke front end. On the restart, Sears slipped into second, while Larry Wight climbed from deep to fourth.

A multicar scramble near the tail of the field made the yellow fly on lap 14, setting up a restart with Root leading Sears. Sears got past Root for the lead, but behind them, Dygert and Wight made contact a couple of times for third, ultimately sending both drivers hard into the turn three wall. Wight was able to restart tail, but Dygert’s day was done.

The pass Sears made on Root didn’t count with the wreck happening the same lap, so this restart, Sears drove under Root to officially lead lap 16. Once out front, Sears steadily pulled away from Root, up to a straightaway with ten laps left. While Pat Ward, Dave Marcuccilli, Billy Whittaker, and others battled hard for third, there was no challenging Tim Sears Jr. as he rolled to his second win of the night. Todd Root came home second, while Dave Marcuccilli collected his third top five of the evening. Billy Whittaker got fourth, while Larry Wight rebounded for fifth.

Ronnie Davis started out the night strong with a win, but ended the night driving a Sportsman in the final event. Motor issues sent the 32R pitside in the second main.

“It really represents how this year has been going, from hero to zero real quick,” Davis said. “The car has been great the last three or four weeks, I was told Larry was right on me at the end but I knew as long as I kept hitting the bottom that we would be okay.”

While Davis ended his night on a bad note, Sears did not, picking up two wins to move into second place in the points and close the gap on Larry Wight.

“We just haven’t had the luck here all year,” noted Sears. “Fast cars, just haven’t been able to park it, so to do it twice in a night means a lot. The first race the track was just too fast, but the slicker it got the better we were. It slowed down for the next two races and came to us.”