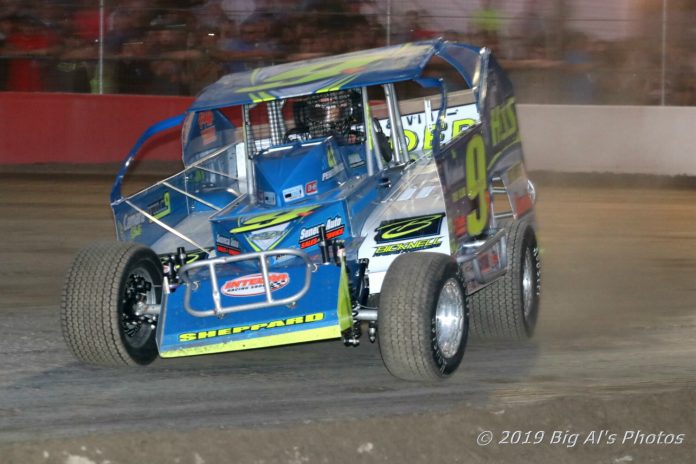 WEST HAVEN, VT – Matt Sheppard had never seen Devil’s Bowl Speedway prior to Sunday, August 11, but he quickly became very familiar with the Vermont track’s Victory Lane area. “Superman” won every race he ran at the inaugural “Battle at the Bowl” Big Block/Small Block Modified Challenge, and he capped an undefeated three-day weekend with an $11,500 payday. Brett Hearn and Kenny Tremont Jr. also took victories at the event, which drew one of the largest grandstand crowds of the last 20 years at Devil’s Bowl Speedway.

The event offered a unique format that allowed drivers to enter and attempt to qualify two open-wheel Modified cars – one powered by a 358-cubic-inch Small Block engine making around 650 horsepower and the other with a 467-cubic-inch Big Block engine good for 800-plus horsepower – and several drivers took the opportunity. Sheppard, however, stuck with one entry – a Big Block – and enjoyed a perfect night by sweeping his qualifying heat race, a 25-lap preliminary feature, the unique “Pole Shuffle” match race tournament, and the 50-lap main event.

Sheppard opened his perfect weekend with wins on Friday and Saturday at two tracks closer to his Waterloo, N.Y. home base, then made the 240-mile haul across the New York State Thruway to Devil’s Bowl. Marc Johnson led the 25-lap Big Block feature from the start, but Sheppard took command at lap 7 and sailed to an easy win. The Big Block race changed dramatically in the final laps when Johnson spun and collected top contenders Stewart Friesen, Tremont, and others. Brett Hearn finished second ahead of Bobby Varin, Demetrios Drellos, and Brian Berger.

Hearn, who entered two cars, won the 25-lap Small Block feature after battling with Tim Fuller. Sussex, N.J. racer Hearn took the lead from Fuller 10 laps in and cruised to the win. Fuller was second, followed by Rocky Warner, Friesen, and Brett Haas. Sheppard and Hearn each collected $1,500 for winning the preliminary features.

Sheppard continued to roll in the one-of-a-kind Pole Shuffle – a single-elimination, bracket-style, match race tournament to decide the pole position winner for the 50-lap finale. With the top six drivers from each 25-lap feature squaring off one-on-one for a two-lap sprint, Sheppard took down Drellos and Berger in the first two rounds before defeating Friesen’s Small Block car in the final match.


The $10,000-to-win Battle at the Bowl was dominated by Sheppard all the way; he led all 50 laps and was never seriously challenged even as he worked through heavy lapped traffic in the final laps. Friesen finished second in the finale and earned $5,250 after combining his three feature finishes and a bonus as the highest finishing Fonda Speedway regular. Hearn finished third to complete a trifecta for the day, totaling $4,600 in winnings.

Warner – who won his heat race and provided excitement in the Pole Shuffle – finished fourth. Fuller ended the night in fifth place, followed by Varin, Drellos, Berger, Johnson, and Tremont. Friesen, Hearn, Warner, and Fuller all used Small Block cars in the 50-lapper, with Sheppard and the balance of the top 10 in Big Blocks.

Tremont pulled a different kind of double-duty, as he also competed in the 40-lap “Leon Gonyo Memorial” race for the King of Dirt Racing Crate Modified Series. The West Sand Lake, N.Y. driver dominated the box score of the race, but his victory was never certain until the checkered flag waved. Joey Scarborough had a stout drive from the 10th starting position and engaged Tremont in a thrilling battle until the final corner. Scarborough pulled even with Tremont with two laps to go before being trapped in lapped traffic and having to settle for the runner-up finish. The win was Tremont’s sixth in 11 Crate Sportsman races at Devil’s Bowl in 2019.

Kale Groff made it two podium finishes in two Devil’s Bowl appearances in 2019, finishing third. Vince Quenneville scored his first top-five finish of the season in fourth place and Robert Bublak Jr. finished fifth in his first Devil’s Bowl start of the season.
Limited Sportsman regular Adam Piper turned heads in his first attempt to qualify for a top-level Sportsman race, by leading the first four laps and holding on to a sixth-place finish. Frank Hoard III took seventh ahead of Tony Ballestero, Marty Kelly III, and rookie Joey Roberts. A massive pileup on lap 17 eliminated seven drivers from the race, though no injuries were reported.

In addition to the racing, the event served as a fundraiser to support autism awareness and the initiatives of the Crossroads Center for Children in Rotterdam, N.Y. A silent auction for racing memorabilia donated by Stewart Friesen raised money along with a pre-race cookout and cornhole tournament, and the 50/50 raffle added another $2,600. The Star-Spangled Banner was performed by “American Idol” finalist Madison VanDenburg.

Devil’s Bowl Speedway returns to weekly action on Sunday, August 18 at 7:00 p.m. as Fabian Earthmoving presents the track’s five weekly racing divisions and the first-ever appearance of the Can-Am Mod Lite Series. Regular admission is $12 for adults, $10 for seniors, and free for kids 12 and under. Preparations are also underway for the Interstate All Battery Center “Vermont 200 Weekend” on August 31 and September 1.