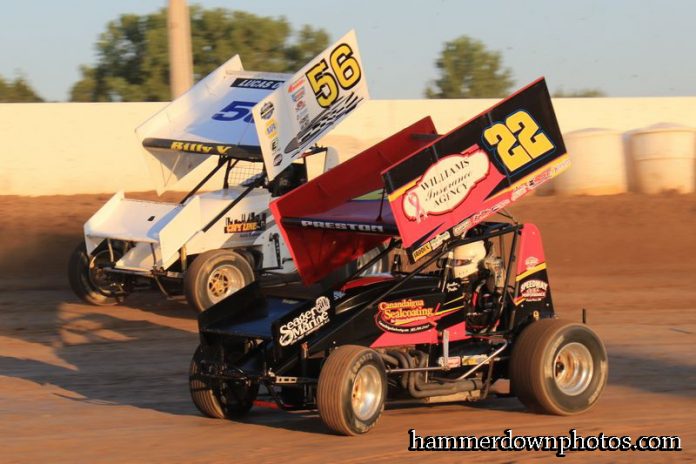 WEEDSPORT, NY – Jonathan Preston came into the 2019 Lucas Oil Empire Super Sprints season still looking for his first A-Main win of 2019. After Sunday’s 25 lap, Mach 1 Chassis A-Main, he now is a three-time winner on the tour which puts him only behind Paulie Colagiovanni as the winningest driver on the tour.

“It’s been a pretty special year so far, we have been so close to getting a A-Main win over the years and now to have three in one season, that’s cool,” said the Romulus, NY, second generation driver. “We still consider ourselves a low dollar team. I mean this Mach 1 was a bent frame I got off of Jeff Cook for $500, the motor isn’t the best but you just never give up and try as hard as you can.”

The Weedsport oval had some bite and a good outside, that plays right into Preston’s wheelhouse. “It was definitely different than what it usually is,” he noted, “This track can get real slick but it never did tonight. I ran the top and I ran it hard.”

By the luck of the redraw, Preston started on the pole of the A-Main that also paid points for the NAPA Auto Parts US Tour and the E&V Energy I90/I81 Series. Alongside was Chuck Hebing who won the night before at Brockville. “I knew Chuck was going to be tough and I was a bit worried with him starting on the outside, he likes it up there,” said Preston, “But, I got the jump. Usually this motor stumbles on starts but I guess it was good enough.”

Many-time Weedsport winner Danny Varin got into second just shy of halfway and was hoping to close the gap on Preston but just never got close enough. “We just seem to be a little off this year, I’m just not quite sure what it is either,” said Varin who is surprisingly winless so far in 2019, “Second isn’t bad but I do like to get some wins, we will keep digging and see if we can get a few here at the end of the season.”

Colagiovanni is the current point leader and he got by Hebing in the closing stages of the event to stretch his point lead a little more over Hebing and Jason Barney who was a dropout victim. “The track was faster than normal which I like but it also made everyone else fast so passing was tough,” said the 18 year old, six-time winner. “It still was a good night, I just can’t thank the guys enough for giving me another good car.”

Hebing came home in fourth followed by Shawn Donath. The next five was made up of Jeff Cook, Tommy Wickham, Larry Wight, Kelly Hebing and Sammy Reakes IV.

Dave Axton lost a left rear wheel and went over on his wing but walked away uninjured.