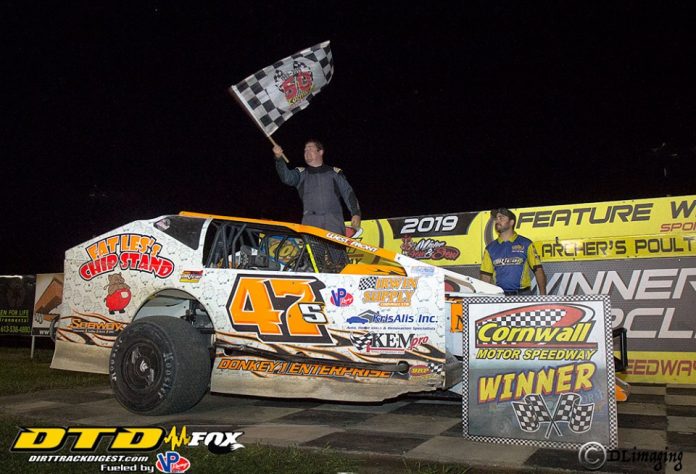 CORNWALL, ON – Archers Poultry Farms presented the Northeast Late Model Alliance along with a full program.

In the Northeast Late Model Alliance 35-lap feature, Steve Baldwin took the lead over Charlie Sandercock and Adam Naylor. As the feature progresses, a lot of changes behind the leader as Naylor moved to second with Austin King and Phil Potts all passing Sandercock who faded to fifth by halfway point. On a lap 20 restart, Baldwin stayed to the lead with Potts moving quickly to the front challenging Naylor for second with 10 laps to go. Potts lost a little bit of ground in the final portion as King went back to third. Potts stopped in turn 2 with 4 laps to go and lost his top 4 position. A lot of action in the last 4 laps as Sandercock moved back to second and challenged the leader but Baldwin held for the lead getting the win over Sandercock and Kyle Sopaz who slipped to third in the final portion.

Corey Wheeler to the lead in the 30-lap Loud and Dirty Modified feature with Kyle Dingwall in second and Stephane Lafrance in third. Wheeler got a good lead over the field as Kevin Hamel in third. Wheeler in front of the field with Carey Terrance starting to make some noise in the final portion of the feature, Terrance used the outside lane to pass Hamel and Dingwall and moved to second. Wheeler led all laps in the feature to claim his first feature of the season over Terrance and Dingwall.

In the Next Level Home Improvement Sportsman feature, Moise Page to the lead with Brianna Ladouceur in second and Justin Desrosiers to third. Cedric Gauvreau made a good move and third over Desrosiers. Red flag came out for Kalen Draper who landed on his roof on lap 6. On the restart, Brianna Ladouceur used the outside lane to take the lead over Page with Gauvreau in third in battle with Cayer. Ladouceur kept first but Moise Page was still close to Ladouceur at halfway point. Page used the outside lane to take the lead with Cayer in third. Page never looked back and got his second feature of the season.


Another great 15-lap feature for the Tracy Wheeler Assist2Sell Mini-Stock with a great battle between Chris James and Yannick Potvin, both drivers exchanging the lead with Potvin having the edge at the end to claim his second win of the season over James and Justin Jodoin.

It will be another good night for the family with the popular autograph night along with the Sisters for a Cure 50 in the Pro-Stock and the final races for the Weekend Warriors Series in both Pro-Stock and Mini-Stock.