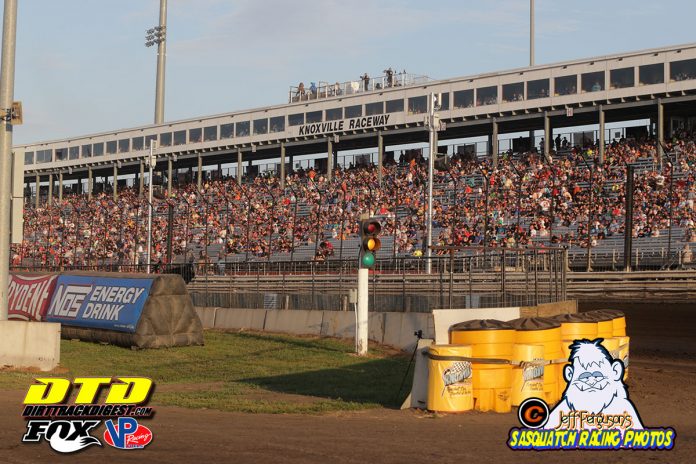 The 2019 edition of the Knoxville Nationals is officially complete with David Gravel adding his name to the historic list of drivers to claim the top trophy in Sprint Car Racing.  It took four grueling nights of racing to get the field set for Saturday night’s main-event.  Some, like Gravel, had amazing weeks while others had weeks to forget.

So as has been the custom the last several years here on DirtTrackDigest.com, there have been 59 facts, tidbits and notes compiled from the 59th edition of the Knoxville Nationals.

1. There were 53 cars entered for the opening night of qualifying action at the Knoxville Nationals.

3. Donny Schatz changed motors after his heat race. He was forced to qualify through the B-Main.

4. Paul McMahan and Aaron Reutzel were the only two drivers in the top 10 in time trials to advance from the fourth row of their heats to make Wednesday’s A-Main.

5. Sammy Swindell had issues in hot laps when flames burned on the headers. The issue was reported to be a loose oil line.

6. Zach Hampton was the first flip victim of the week flipping in the C-Main. He wasn’t hurt.

7. Trey Starks won the A-Main for his first ever Knoxville Raceway triumph.

8. Reutzel picked 487 points on the night. That was good enough to be the high-point man for the week.

10. There were 56 cars pit-side for the second night Knoxville Nationals qualifying.

12. Shane Stewart was the fast-timer of the night. His night ended later on lap one of his heat race when he was involved in a nasty flip in turns three and four. Thankfully he was okay.

13. David Gravel, Parker Price-Miller, Matt Juhl and Joey Saldana were the only drivers in the top 10 in time trials to transfer directly from the heat races to the A-Main.

14. Craig Dollansky was running in qualifying spot in his heat race only to break with a few laps to go.

15. Brian Brown got a flat while running second in the B-Main. He later came back to finish ninth in that same B-Main.

16. TJ Stutts, making his first Nationals run, flipped in the B-Main ending his night. He walked away unscathed.

17. Brock Zearfoss was leading the A-Main only to have his ignition box fail causing him to bring out the caution. He went from a shot to win to finishing deep in the field.

21. Madsen got a second lap after it was deemed by track officials that he was impeded on his initial attempt. Chase Wanner’s car slowed in turn three to force Madsen to get out of the gas.

22. Danny Dietrich flipped in his heat race while trying to make a charge to a qualifying spot after setting second quick time in group A.

23. Chad Kemenah picked up a ride in Jon Agan’s car for the night’s program. He was able to make the A-Main where he finished 13th.

24. Paige Polyak flipped in turn four in the C-Main after contact with another car. She wasn’t hurt.

25. Jason Sides had a rough night. He was involved in a crash at the start of the B-Main where he broke the front end. The team was able to change it and push him back off.

26. One lap later he was involved in a crash with Freddie Rahmer that had him flop over on his side. At that point he decided to call it a night.

27. Austin McCarl was the first driver to miss transferring in A-Main where he finished fifth.

28. Logan Schuchart has now made the Knoxville Nationals three-years in a row by transferring on Friday night. He finished second in the main-event.

30. For the second year in a row, the Saturday night portion of the Knoxville Nationals was sold out.

32. The Knoxville Raceway played a tribute video to Greg Hodnett on Wednesday night and again on Saturday night. You can see the video here: https://youtu.be/FVXkYtl0ln8

33. There were 10 cars didn’t return for Saturday night’s finale, most were in the E or D-Main.

36. The first caution of the day came in the E-Main when Harli White slowed with issues.

37. AJ Moeller went for a wild ride in the D-Main on a restart. He wasn’t hurt, but his day was done.

38. James McFadden changed motors prior to the start of the B-Main. He didn’t get any hot laps in as the team rushed to get the change completed. He still managed to make the A-Main.

39. Marcus Dumesny took a tumble in turns one and two during the C-Main. He wasn’t hurt.

40. Terry McCarl’s Knoxville Nationals came to an end in the B-Main. McCarl flipped onto his side after contact with Tasker Phillips. Cale Thomas was also involved.

41. Spencer Bayston and Josh Baughman were involved in a heavy crash in the B-Main. Both drivers got upside down while neither was injured.

42. Baughman wasn’t happy with Bayston afterwards. He quickly got out of his car to confront Bayston as local Sheriff deputies directed him to do otherwise.

43. The A-Main took the green flag shortly before 11pm on Saturday night.

44. The was an early yellow in the race for Dominic Szelzi as he stopp and the only other caution of the main-event, except for the break, came for Donny Schatz as he slowed with fuel issues on his No. 15.

47. Drivers from four different countries competed in the Knoxville Nationals including Australia, Canada, United Kingdom and the United States.

48. James McFadden was the 2019 recipient of the Jesse Hockett Mr. Sprint Car Award. It was worth $2,000.  He beat Aaron Reutzel and Cory Eliason for the top honors.

49. Tanner Thorson was named Rookie of the Nationals while earning $1,000 for the honor. He finished 20th in the B-Main.

50. Carson Macedo won a $1,000 bonus from Premier Speedway for being the highest finishing driver at the Knoxville Nationals that did not make the A-Main, but also competed in the Grand Annual Sprintcar Classic. Macedo finished one spot of making the A-Main.

52. He also picked up another $1,200 from the Knoxville Raceway for the fifth-place finish.

53. Lynton Jeffery won the C-Main $100 Hard Luck Award for being the first car out of a transferring spot to the B-Main.

54. Logan Schuchart was honored as the Hard Charger. He raced from 22nd to second in the main.

55. Gravel is the first driver in history to win Knoxville Nationals Rookie Year honors and then later become the champion.