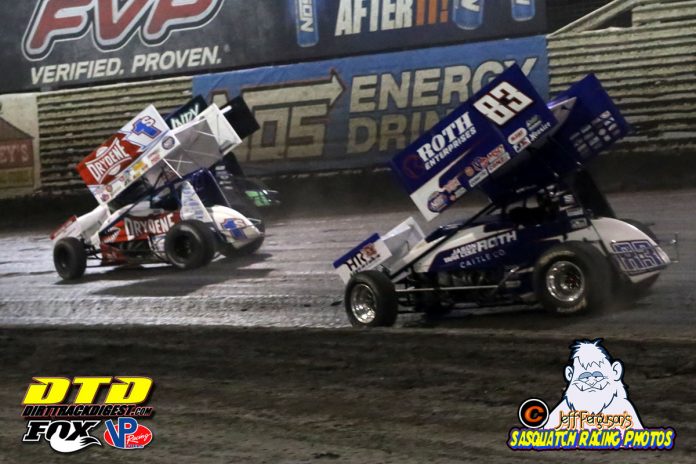 Although they didn’t reach the pinnacle of the sport on Saturday night at the Knoxville Nationals, Logan Schuchart and Daryn Pittman have nothing to hang their heads about after their performances in the 50-lap final. Schuchart came from 22nd to get second late from Pittman. Pittman had to settle for third.

Schuchart was forced to come through the Friday night Hard Knox program in which the top four finishers in earn starting spots 21 through 24 in the finale. It’s the third consecutive year that Schuchart has worked his way through that program to the A-Main. He was running Friday night as a result of struggling in the Capitani Classic on Sunday.  Then they missed the setup on Wednesday night in qualifying forcing them to regroup Friday.


“Honestly, I can’t say enough about this team,” said Schuchart. “I know that is common things to say. Since we’ve started this deal there are so many times when we get knocked down and get back up. It’s what this team is all about. It’s something my grandfather has been about since he’s raced and its something he’s taught me since I was little kid.

Schuchart got the handle on the track on Friday night and that helped him get comfortable quickly in the feature Saturday. He was able to make good time on the bottom of turns one and two while keeping pace on the top in three and four.

“This whole week I felt like every time we were on the race track it was pretty slick,” mentioned Schuchart. “I just took from what I learned last night and we tweaked it a little bit. I was able to run the bottom real well in one and two and I felt like I favored the top in three and four. I’m pretty sure that’s where David was running too.

“The car felt like it could go anywhere. If I had to go to the bottom of three and four I could run it in wide open and it stuck. When you have a car that feels like that and you can put it anywhere on the racetrack.  It’s fun to drive.”

It was the second big race that Schuchart has run second. He ran second in the Kings Royal after leading that before coming to the Knoxville Nationals to finish second.  He knows the team is close.

“To start 22nd and run second at the Knoxville Nationals is awesome,” he said. “ There are good and bad second place finishes. The Kings Royal was a tough one and I wasn’t smiling a whole lot on that one, but tonight I’m smiling and it’s pretty awesome.

“You got to run second before you can win them. We are racing with the best in the business. To be up here with these guys is awesome. We are going to keep working at it. I believe we have a race team to get the job done. We came close in the two biggest races in Sprint Car racing. I’m looking forward to coming back, seeing if we can tweak it and make it that much better.”

Daryn Pittman had never finished good enough to make an appearance in the post-race press conference at the Knoxville Nationals which features the top three finishers in the main-event. Saturday, he finally got than chance after his third place finish in the A-Main. Had it not been for lapped traffic late, he may have held off Schuchart for second.

“I’m pissed off about it, but I‘ve been that lapped car and I can guarantee I’ve cost some guys some positions before,” commented Pittman. “I’m happy with the effort that our Roth Motorsports Team put in and for us to have a car that I honestly feel like was capable of competing for a win. I don’t think I’ve ever had that before. This is the first time in this building at the end of the night.

“There are good thirds and bad thirds, I’m kind of in between. On one hand I’m happy and on the other hand I’m pissed I made too many mistakes as a driver to stay with David and see how it shook out later on. Honestly, he had the better car and was able to get through traffic better than I was. I can’t make those mistakes and expect to win this race.”

Pittman had two hiccups that cost him.  Midway through the second portion of the race he made a mistake that cost him nearly a straightaway.  Then, on the final lap, a lapped car hopped the cushion in front of him. He had to get off the gas to allow the car to get righted. That opened the door for Schuchart.

“I made a huge mistake on one lapped car in three and four that cost me honestly a full straightaway,” he said. “I couldn’t believe I didn’t lose several positions. I took the white and the lapped car jumped the curb right in front of me in one and two and basically I had to come to stop and cost me a lot of ground.”

So neither one, but both left the Knoxville Nationals with smiles.