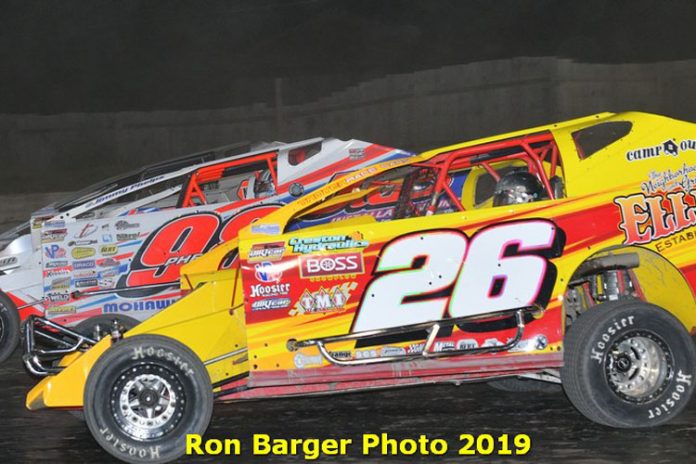 MIDDLETOWN, NY — The Super DIRTcar Series invades the Orange County Fair Speedway on Thursday, August 14, for the make-up Battle of the Midway 100 to kick-off the Centennial Weekend at the legendary facility.

Last year’s dramatic 100-lapper ended with Stewart Friesen winning the grand prize and Matt Sheppard and Erick Rudolph finishing second and third. Heading into the 2019 Battle of the Midway 100, Sheppard and Rudolph are once again dicing it up for Championship glory with

Rudolph has been showing lots speed as of late and capturing the last two Super DIRTcar Series events.  Rudolph took top honors at the Eldora Speedway before coming back east and taking the checkers at the Merrittville Speedway allowing him to close within 94 points of Sheppard.  He now has four wins on the 2019 season with the the series.

Mat Williamson had a great run at Eldora Speedway, once again finishing on the podium in third.  He then came back with a fifth at Merrittville to keep his third place position in the points.  He’s continuing to chase that first Super DIRTcar Series win for the Buzz Chew team.

Teammates Larry Wight and Billy Decker head to Orange County sitting fourth and fifth in the overall tally.  Wight has cracked victory lane once this year on the series while Decker is still searching for that first win since returning to the Gypsum Racing stable.

Ryan Godown is the top rookie campaigner on the Series thus far in 2019 as he sits eighth in the overall points.  Demetrios Drellos and Jack Lehner are locked in a duel right behind. They are 11 and 12th, respectively.

New clay has been laid down on the historic speedway with only a handful of events having been run on the track in recent weeks.  Godown was the most recent winner on Saturday night beating out a stellar field as they prepare for the $100,000 to win finale on Saturday night.

It’s always a torrid battle when it comes to the OCFS faithful vs. the Super DIRTcar invaders. Seven-time Super DIRTcar Champion Brett Hearn currently leads the Orange County Fair Speedway points battle over Tommy Meier, Craig Mitchell, Chris Whitehead and Matt Janiak. They will be out in force to defend the home turf and while taking home $10,000 for their efforts and a coveted spot at NAPA Auto Parts Super DIRT Week in the Billy Whittaker Car and Trux 200.