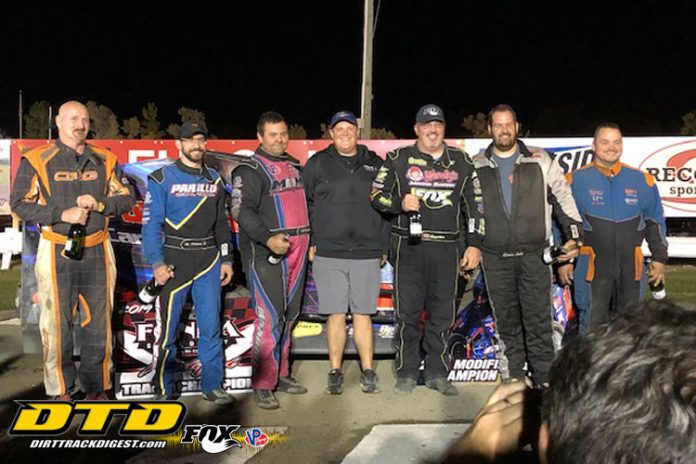 Our weekend started as normal at Albany Saratoga and one of the first things we did was stop by the flagger stand to listen to Mia Mangino’s interview with two CRSA sprint car drivers, Alysha Ruggles Bay from Stanley, NY driver of the pink No. 48A and Emily VanInwegen of Stephentown, NY in car No. 56. Over the years we’ve seen many women come and go in our sport but these two seem to stick with it and Capital District fans get to see them on their occasional visits to local tracks. Alysha runs regularly at Land of Legends on Saturday nights in a weekly sprint division where she sits fifth in points, she is fourth in CRSA points. Emily is currently fifth in CRSA points. Both young women have impressive stats, plenty of top 10 and top five finishes along with wins. We look forward to seeing them in competition for a long time, we need women representatives in our sport. As we walked through the pits we came upon a No. 16 Sportsman that we are more accustom to seeing at Lebanon Valley. Nikki Ouellette has been to the Great Race Place many times, but never to race so she thought she would try her hand on Friday. It had to be one major adjustment for someone that races the high banks. Nikki’s racing has been sporadic lately due to health issues that her mother is dealing with. Her crew chief is her dad and both have been taking care of her mother. We are thinking of them at this time, the racing will be there later. When you’re bitten by the racing bug at an early age it sometimes comes back to haunt you years later. With the suggestion from fellow racer, John Roese, Willy Reed of Stamford brought a vintage racer to Fonda on Saturday night to scratch the itch from the racing bug that bit him many years earlier. Reed formerly raced IMCA Mods at Fonda from 2000-2003. He was a Pro Stock racer from 1991-1996 in his familiar No. 11R. Willy had the IMCA chassis in his garage for years many times weighing the option, “Should he send it to the crusher or not.” Well, he didn’t send it to the crusher, but instead turned it into a vintage racer and came to Fonda on Saturday night. One more welcome addition to the MVVDM club. The club has been thriving this season under the direction and promotion of Laurie Fallis and her team. Another very familiar Fonda car among the vintage class on Saturday was the No. 61 owned by Bruce and Clare Gray. Normally driven by Doug Mattison, on Saturday it raced the historic oval with Bruce and Clare’s son, Brian behind the wheel.

Saturday was Benjamin Moore Championship Night at Fonda and Rocky Warner of Gloversville made history when he won the Modified title by virtue of five wins on the season. Warner’s history making accomplishment is that he now has won titles in four divisions at the track, something that has never been done before. Warner and car owner Jake Spraker of Gloversville have a history of success at Fonda, Warner with 68 career wins in the four divisions where he also has titles. Spraker is a Hall of Fame member and has owned cars for several of Fonda’s successful drivers. This year’s title was Spraker’s tenth at Fonda.

We spent time in the tower at Fonda this season and on Saturday got to enjoy the delicious strawberry shortcake given to the announcers and officials for all their hard work this season, compliments of JoJo and George Bills, fans of Fonda Speedway. Sunday Ed, Sr., spent the day with Fast Eddie at Devil’s Bowl Speedway. We just don’t get there enough times before a season runs out so Sunday was special in many ways. Hunter Stratton, son of Hector, put on a promoter’s hat and took on the duties for the Battle of the Bowl the Big Block/Small Block Modified Challenge that consisted of two 25-lap qualifiers paying $1500 to win, one big block qualifier and one small qualifier with 10 qualifying out of each for the 50-lap feature paying $10,000. Brett Hearn won the small qualifier and Matt Sheppard won the big block qualifier. Sheppard also went on to win the $10,000 main event. On the card also was the Mike Bruno promoted, King of Dirt Leon Gonyo Memorial race and the winner of that was Kenny Tremont. For Tremont is was win number 380 and for Brett Hearn it was win number 916 and for Sheppard win number 364. Sheppard now has 29 wins for the 2019 season at 13 different tracks from Canada to Florida. It was a beautiful day and we saw many friends at a beautiful facility.

Fonda Speedway breaks for the Montgomery County Fair to prepare for their big event, the 178th Fonda Fair from August 28 thru Sept. 2. Fonda Speedway returns September 14, with a $4000 to win Modified event plus Crate 602 Sportsman, King of Dirt Racing Series Nationals, minimum $2000 to win, CRSA Sprints, Pro Stocks, $1000 to win, Street Stocks, four Cylinder Cruisers and Vintage Cars. The final event at Fonda this season is a three day racing festival starting Thursday, September 26 and culminating with the Fonda 200 paying $53,000 to the winner.

We are heading to the Orange County Fair Speedway on Thursday for the 100th Anniversary celebration. The event is billed as three days of racing, celebrating history and making it. The celebration starts Wednesday with Tim McGraw concert. Racing begins on Thursday with a Super DIRTcar Series race, 100-lap, $10,000 to win. The entire weekend is a celebration of the history of the track ending with the 160 lap, $100,000 to win and we want to be there to see it all happen.