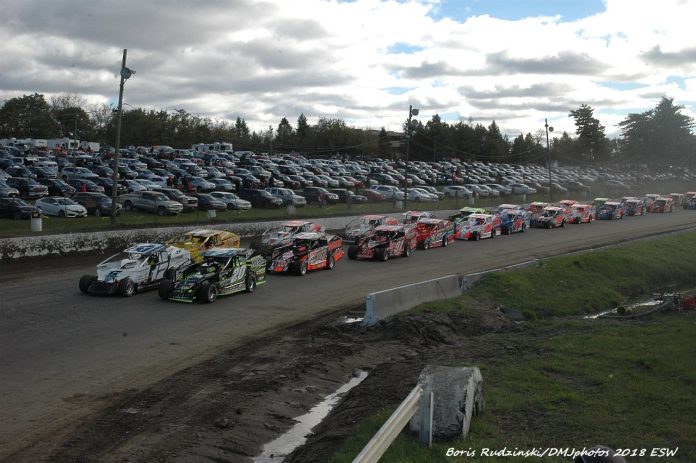 Northeast Modified drivers and fans alike are ready to ascend on the Orange County Fair Speedway for Centennial Weekend with $100,000 on the line Saturday night in the 160-lap finale.  The best drivers in the Northeast will take on the locals looking to walk away with the richest payday in history for the big-block Modifieds.

All the stars have made their intentions known that they’ll be in attendance including perennial Orange County favorite Brett Hearn, Northeast wins leader Matt Sheppard, the hottest driver in the Northeast Erick Rudolph and former ESW 200 winner Stewart Friesen.  It will be a who’s who of Modifieds hitting the track for action on Thursday, Friday and Saturday night.

Here, DirtTrackDigest.com takes a look at the weekend with general information including purses, laps and more. We’ll also give you our favorites, contenders and sleepers to take the checkered flags during the three-night event.

LAPS: 160 (all laps count until 130, last 30 run under green / will utilize green-white-checkered finish)

Drivers competing on both Thursday and Friday will amass points on a 100-point scale.  The top 12 drivers in the standings after combining the points for the two preliminary nights will be guaranteed starting spots 14-25 in the main-event on Saturday.  They may attempt to qualify on Saturday to improve their starting positions in the field.  You must attempt to qualify Thursday and Friday to be eligible.

In this guide, fans and drivers can get a breakdown of qualifying procedures, purses and rules.  Everything needed to understand how the heats, consolations and features will be lined-up.  CLICK HERE for the competitors guide download.

STEWART FRIESEN: Friesen is the odds-on favorite coming into the weekend.  He’s won every big race at OCFS as well as elsewhere.  He’s a multiple-time winner of Super DIRT Week who knows how to get it done on the biggest stage.  He’s coming off his first NASCAR Truck Series win a couple weeks back at Eldora.  His confidence is riding high.  He’s got a couple of Eastern States wins and a Centennial Weekend win could be in cards.  He will be a factor in both features he races.  He’ll miss Thursday night due to NASCAR Truck Series commitments.  If I were a betting man, which I am, I’d put him at worst on the podium for the two events he can run.

BRETT HEARN: It’s impossible not to have Hearn as one of the favorites heading into the Centennial Weekend.  Hearn is the all-time winningest driver at Orange County.  He’s got more wins in more big races than any other driver to ever compete at the facility including the Eastern States 200.  The only question for Hearn is how much of an effect will the new racing surface have on his dominance in these races.  He was good on the Hard Clay, but can he be as good on the new track surface?

ANTHONY PERREGO: He is the defending Modified track champion at OCFS.  Although he hasn’t had much luck in the big-block Modified in 2019 at OCFS, he’s dominated the small-block division since the new clay was put down.  He’s won every feature leading up to Centennial Weekend in the division.  He has yet to have the big win, but could he get his first this weekend?  I’m thinking he’ll be right there at the end in each of the features.

MATT SHEPPARD: We could just say he’s Matt Sheppard and end it there.  Sheppard has more wins this season than any other driver in the Northeast with the big-block Modified.  Although, as of late, he’s been doing a little chasing of Erick Rudolph.  Even with that said, Sheppard earned a win earlier in the year at OCFS and it would shock no one to see him sweep all three races this weekend to pick-up $100,000 plus.

ERICK RUDOLPH: Other than Sheppard, the hottest driver coming into this weekend is Erick Rudolph.  He just keeps picking up wins.  Rudolph has won the last two Super DIRTcar Series features at Eldora and Merrittville.  He finished third in the Battle of the Midway last year.  I expect him to be a factor all weekend long while mixing in at least one feature win.

BRIAN KRUMMEL: Krummel was the 2016 winner of the Eastern States 100 for the small-block Modifieds.  He has yet to break through this season in the big-block ranks, but he can never be counted out.  He usually finds his way to the front in the longer races at OCFS.

TOMMY MEIER: Meier is a former champion in every division at Middletown and he’s currently only a few markers behind Brett Hearn in the chase for the 2019 Modified track title.  Meier and his team know how to get it done at Orange County.  He’s won Eastern States and winning one this week could add to his impressive OCFS resume.

MAT WILLIAMSON: Mat Williamson has yet to win a Super DIRTcar Series race this year for his Buzz Chew Team.  He has that chance on Thursday night.  He’s been so close this year, but things just haven’t fallen his way.  He’ll compete in the $100,000 with the Jeff Behrent owned No. 3.  He has laps at Middletown and has been good whenever he’s trekked down from Canada.  He’s one to keep your eye on.

JIMMY PHELPS: He’s still searching for a Middletown win, but he came close on Saturday night finishing second in one of the features.  The new slippery surface is right up Phelps’ alley.  He’s good in Central New York on the slick.  He’s been especially good at Utica-Rome in his career and several drivers have made comparisons between Utica and the new surface at OCFS.  He’s got big race pedigree as he also won the Outlaw 200 at Fulton which was, of course, won on the slick.

LARRY WIGHT: It’s hard to not put Wight on the list of favorites, but he just doesn’t have a lot of experience at Orange County.  Maybe that won’t matter.  He is the defending winner of Super DIRT Week and that track races a lot like the new Orange County.  Don’t be surprised to find him in the hunt this weekend for a win.

BILLY DECKER: Decker is a former winner of the Eastern States 200, Super DIRT Week and just about every other big event that can be listed.  He hasn’t won yet in 2019 with the Super DIRTcar Series, but don’t count this second member of the LJL Racing stable out.  He just may get that win this weekend or one of the other features.

BILLY DUNN: Dunn has made the trek to OCFS the last two weekends to get things figured out for this event.  He’s good at Can-Am Speedway and Utica-Rome Speedway on the slick.  He may just be one of the outsiders that pulls off an upset.  Oh, and let’s not forget, he did win at Super DIRT Week on the Mile and that too, was an upset.

MIKE GULAR: Gular has called the OCFS home for the first time in his career this year on Saturday nights.  He doesn’t have the same pedigree as the others on the slicker surfaces.  Gular was a mainstay on the rough and tumble Pennsylvania circuit before making the change.  He keeps getting better and better at OCFS and this may just be his breakout weekend.

JERRY HIGBIE: Higbie is a local with lots of wins under his belt at Middletown.  He’s also found success on the road.  If anyone can fend off the invasion of the best of the best to protect the home turf this weekend it’s Higbie.  He hasn’t won yet this year at OCFS.  This weekend he gets three chances. He’s due.

BILLY VANINWEGEN: Billy V has two wins at Orange County in 2019, albeit on the older surface.  The one thing VanInwegen has going for him is he has spent a ton of time in Central New York running with the Lucas Oil Empire Super Sprints.  He knows how to adapt and change with the racing surface by spending so much time on the road.  I’m not sure he should be considered a sleeper, but I think he will turn some heads this weekend.

Racing for this weekend’s Centennial Weekend gets underway on Thursday night with the Super DIRTcar Series.  Gates open at 2 p.m. with time trials taking to the track at 5 p.m.

Visit DirtTrackDigest.com for a full schedule of weekend events at the Orange County Fair Speedway for Centennial Weekend as well as exclusive stories, photos and recap videos from the weekend action.