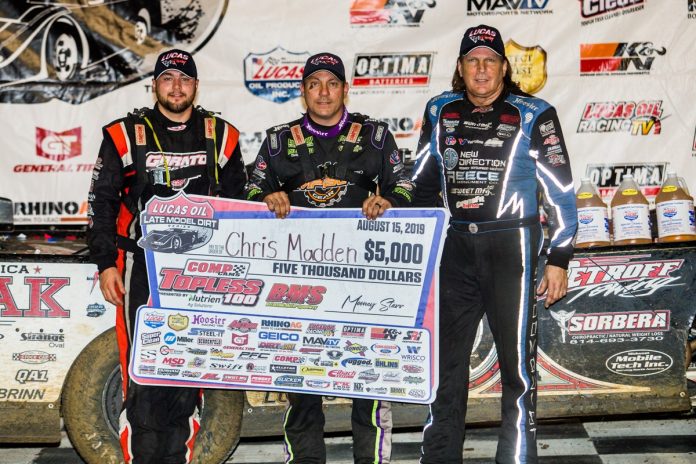 The win marks his third consecutive trip to Victory Lane in Lucas Oil Late Model Dirt Series competition. Madden survived a battle with Brandon Overton to score the victory on night one of the COMP Cams Topless 100 – Presented by Nutrien Ag Solutions.

Madden; the 44-year-old South Carolina native; started alongside polesitter Mike Marlar on the front row for the 30-lap main event. Madden bolted to the lead at the drop of the green with Marlar going to the second position. Those two were joined by Overton and Davenport in lapped traffic as a four-car battle for the race lead was developing until a caution for fifth-place running Tyler Erb slowed the field.

After losing the lead for just one lap, Madden managed to regain his momentum and powered his way to the victory. Overton crossed the finish line in second with Madden’s teammate, Scott Bloomquist finishing in third. Jimmy Owens and Jonathan Davenport completed the top five.

“We were bottoming out getting into one. We shoved the nose across the center, and we got hung up in the fluff,” said the winner talking about how Overton had gotten by him for the race lead. “It opened the door for Brandon. We gathered it back together and made a good corner in 3 and 4. Right now going through the race I am wondering what we are hurting in this race and what we need to maintenance the car for tomorrow night’s race. We don’t want something to bite us that we overlooked tonight for Saturday’s big race.”

“If the track stays like this for tomorrow night we definitely learned a lot. I think Mooney will work on it and get it ready for the rest of the weekend. It will be back to the old Batesville.”

Overton, who was seeking his fifth career Lucas Oil Late Model Dirt Series victory was in the hunt the entire race. “As soon as he [Madden] pushed up the race track we were able to get by him. Then I went down there and did the same thing. I just got a little choppy and if you let it roll in there it would sit down for a little bit. Chris has the best car in the country right now so congratulations to him.”

Bloomquist ended up on the podium after starting in fifth. “Definitely this car is on track now. We can race now. I felt like we were holding our own out there. We might have to tweak it little bit more. We have got a different car under me now. It is great to see Chris winning. It’s great to know our cars are good right now. We just have to keep working hard and we will be fine.”