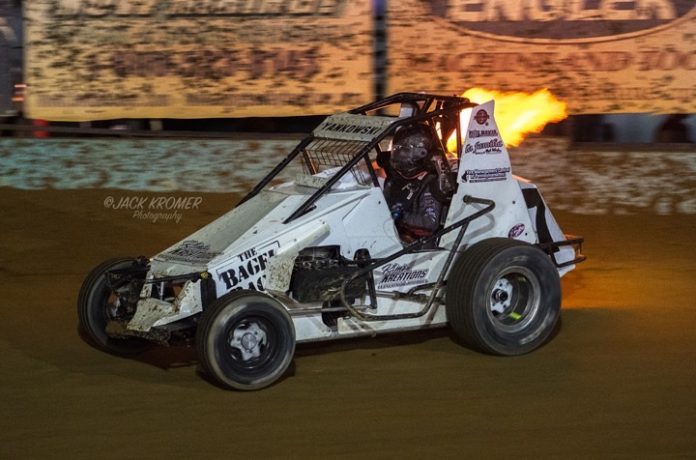 KUTZTOWN, PA –  Alex Yankowski said he had some “motor issues” late in the race on Wednesday night at Championship Energy Action Track USA on the Kutztown Fairgrounds. But no one in the packed grandstand could tell as the teen sensation sped to his first career win in the USAC All Pro SpeedSTR division during National Dirt Week at the Kutztown Fair.

“Big Money” Brian Carber notched his second consecutive victory in the 60-lap Fair National for the Hyper Racing EVO Injection 600 Sprints. Carber followed up his win in last year’s National with another $2,000 triumph on Wednesday.

In the 30-lapper for the USAC All Pro SpeedSTRs, Yankowski out-gunned pole sitter Kevin Graver to grab a slim lead on the first trip around the clay oval. Alex Bright and Matt Westfall slipped into second and third on the eighth circuit, but Yankowski was setting a torrid pace, building a comfortable advantage in the first one-third of the race.

The leader had a close call with 11 laps in the books, as two cars got together in turns one and two and Yankowski could not avoid a bit of contact with them, bouncing his right-rear tire off one of the front bumpers of the disabled cars.  Luckily, there was no damage done to the Bagel Rack No. 7, and Yankowski took off once again on the restart.


A plethora of cautions plagued the middle portion of the event as Yankowski held serve over A. Bright, Westfall, TJ Mayberry, Graver, and Trevor Kobylarz. On a restart at the halfway mark, TJ Mayberry flashed by Westfall on the high side before slicing to the bottom and picking off Bright for second. Kobylarz was also on the move, battling Westfall and Graver for fourth spot.

With Yankowski cruising out front during the second half of the feature, the best battle for position was from third on back as a surging Matt Janisch fought with A. Bright and Erick Rudolph. Tim Buckwalter and point leader Billy Pauch Jr. were involved in a couple of skirmishes throughout the race, but both battled back to run inside and just outside the top five. Over the final tours, T. Buckwalter and Kobylarz dueled side by side for fourth position while Tom Mayberry held off Pauch Jr. for sixth.

At the finish, it was Yankowski blasting under the checkered flag to win by just more than two-seconds over TJ Mayberry. Alex Bright wound up third with T. Buckwalter fourth and Kobylarz finishing fifth.

The competition in the 60-lap Fair National for the Hyper Racing EVO Injection 600 Sprints was fierce from start to finish, with several drivers forging their way to the front during the long distance affair. In the end, though, it was the experience and racing savvy of Brian Carber that prevailed once again.

“Damon (Paul) was really flying at the beginning, and I was kind of riding at first, but I figured I better get going and try to keep pace with him and Joe (Kay),” explained Carber after the race. “Under yellow, I kept reaching back and I could still feel the nubs on my left-rear tire, so I knew we were good and I could run hard. This car was so good tonight; I could run high and low and put it wherever I needed to go.”

Joe Kay, who lives in Pipersville, PA, as does Carber, jumped to the early lead over Eddie Strada, Kenny Miller III, and Paul. On a restart with 11 revolutions complete, Paul and Miller, who had been sliding one another for third place, darted past Strada to run second and third. Kay continued to set the pace, but the tussle for the runner-up spot between Paul and Miller was a good one, and the duo kept pace with the leader as they battled one another.

A yellow with 26 complete was needed for point leader Billy Pauch Jr., who was running among the top five or six during the first half of the race before spinning in turn four. Some smoke was seen coming from the car as Pauch sat facing traffic, and his No. 91s was pushed back to the pit area, resulting in a 26th place finish. The early retirement would cost him the top spot in the standings when the points were tallied after the event.

The top five at halfway were Kay, Miller, Paul, Carber (who started tenth), and Colin White. Carber pushed the “giddy-up” button at that point, going to the top and powering around Paul and Miller to grab the runner-up slot. He began his assault on the leader, with Kay fending off the advances until they rubbed wheels on the front stretch and Carber edged ahead to lead lap 38. Carber then motored away and Miller passed Kay for second. Alex Bright, who started near the front but faded outside the top five in the first half, came roaring back to run fourth and 22nd starter Tim Buckwalter also entered the top five.

With Carber dashing off to a healthy lead and Miller solidly in second, a six-car scuffle entertained the crowd over the final dozen laps. Buckwalter secured the spot with ten to go, but he was far from safe as Bright, Colin White (who had to come from the rear after he was involved in a mid-race tangle), Kay, Strada, and Jimmy Glenn fought tooth-and-nail for the remaining top five positions.

At the end it was Carber taking the checkered flag in the Gable’s Service Center No. 41c by several car lengths over Miller, with T. Buckwalter, A. Bright, and White rounding out the top five.

With Pauch Jr. heading to the pits early and finishing 26th, Kenny Miller III used his runner-up finish to vault over Pauch and re-take the point lead with one race remaining on the 2019 schedule. Miller now leads Pauch by 81 points – he trailed the Milford, NJ racer by 35 when the night began – as they head into Sunday’s finale.

Wyatt Taschler led all the way to win the Junior Slingshot National Tour event, but he had to fend off the challenges of Paulie Hartwig III, then Tyler Ulsh, who ducked under Hartwig to snare second on a restart with three circuits scored. Tanner VanDoren, in a borrowed ride, raced to third but wasn’t able to get by Ulsh.

Taschler maintained a narrow lead and drove to the win over Ulsh and VanDoren, with Hartwig and James Hendricks completing the top five.

A sixth-place finish was enough to clinch the 2019 Junior Slingshot point championship for Kasey Hufcut. Hufcut edged out Ulsh for the title by just five points.

Sunday, August 18 is Championship Night at the Berks County oval as the season concludes with a four division show featuring the USAC All Pro SpeedSTRs, the Hyper Racing EVO Injection 600 Sprints, the All Star Slingshots, and the Restricted 600 Sprints. Warm-ups begin at 6:15 and qualifying events will immediately follow the hot lap sessions. Pit gates open at 4 p.m. and grandstand gates swing open at 5:00.