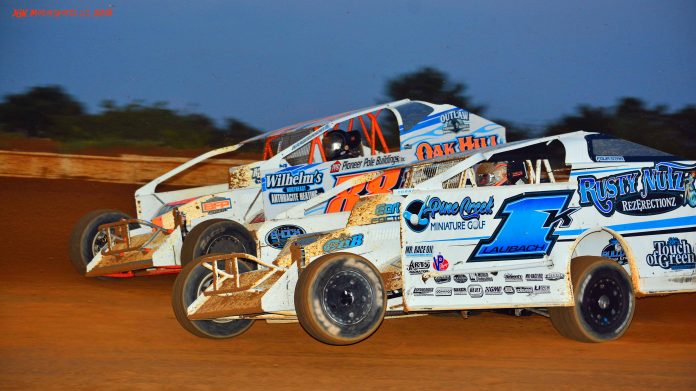 POTTSVILLE, PA –  For Rick Laubach, visiting victory lane at Big Diamond Speedway used to be a fairly regular occurrence. The former track champion has always been a contender at the 4/10’s mile dirt oval. However, the wins have become few and far in between the past few years. In fact, Laubach’s last win at the speedway dates back to August 12, 2016 a little over three years ago.

Friday at First Responder Night, Laubach returned to victory lane wheeling the Ryan Kerr No. 1K small block modified after taking the lead from Kevin Beach Jr. on lap 15 and taking the win.

Dan Hineline would bring the Insigner Performance Modifieds to the green flag with outside polesitter Kevin Beach taking the lead at the start. A lap one caution would slow the race as Hineline was having troubles. There was caution fever early on but when the racing resumed it was Beach once again out in front. Lap eight finds Kris Graver putting the pressure on Beach looking for the number one spot. A lap ten yellow slowed the race pace allowing the field once again to regroup behind the leader.

Back to racing and Beach is back to the point with eighth place starting Laubach now up to second setting his sights on the lead. Beach and Laubach race side by side for lead with Laubach taking command on lap 15. Caution once again slowed the action with Laubach now being shown as the leader. When racing resumes Laubach takes off with Duane Howard now battling Beach for the runner-up spot. Beach and Howard battle hard for second while Laubach extends his lead on the field.

Laubach would go on to take his 23rd career small block win at the speedway with Howard winning the battle for second over Beach. Jared Umbenhaurer returned after a two-week suspension to finish fourth with rookie Alex Yankowski rounding out the top five.

Doug Hendricks returned to a familiar spot on Friday night’s at Big Diamond as he parked his No. 80 in victory lane once again in the USS Achey Sportsman division. Joel Smith would take the lead at the start with fifth place starter Brandon Edgar and eighth place starter Hendricks on the move early on as they sliced through the field.

Edgar would take the lead on a lap nine restart with Hendricks following right behind and into second. Hendricks would go to the high side rim riding the top lane and on lap 11 was able to take the lead away from Edgar. Once in front, Hendricks was never challenged as took the win over Edgar, Mike Schneck, Smith and Matt Clay.

Jason Geesaman returned to victory lane in the Eash’s Towing and Recovery Street Stock division winning a terrific battle with Jeff Haag. Geesaman and Haag brought the field to green and the battle was on with Kody Sites and Ryan Smith also in the fray. Sites would put the pressure on Geesaman with the two making contact forcing Sites to go pitside. Haag would take the lead after a lap eleven yellow on the restart with Geesaman right behind. Another yellow on lap 18 would setup a two-lap shootout between the leaders. The top two are side by side as they cross under the white flag with Haag on the bottom and Geesaman up top. The battle continues with Haag coming out on top by a half a car length to take the win. Following Haag and Geesaman at the finish were Scott Thunburg and Dean Hine.

Shawn Mulhall wired the field in the Savage 61 Road Runner main event as he took the lead on lap one and never looked back taking the victory over Jim Kost, Chris Holland, Matt Ney and Terry Kramer.

The Modified heats were won by Dan Hineline and Kevin Beach Jr.

The Sportsman heat races were won by Doug Hendricks and Darryl Dissinger.

Did Not Start – Eric Tripp

The Roadrunner heat race were won by Shawn Mulhall.