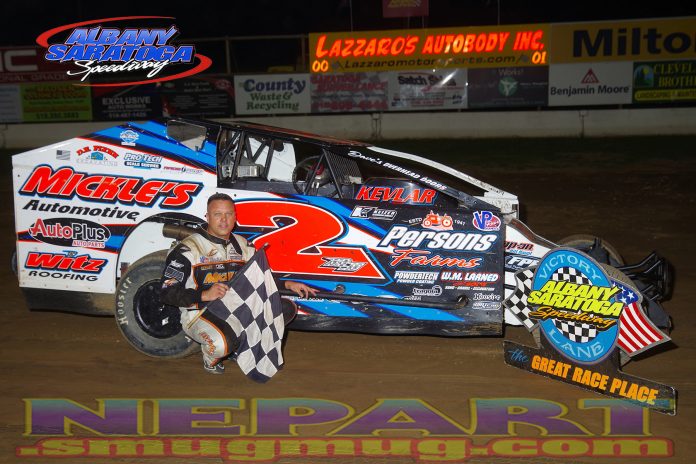 MALTA, NY – A rain delay, a full moon and starting on the pole.

What could possibly go wrong?

The win was Johnson’s third of the season at the historic Malta track, even though he didn’t visit victory lane for the first time until June 21.


“This is a basic TEO car,” said Johnson in victory lane. “We went back to what we really know (pertaining to setup) and since we did that, I’ve won three races.”

A late afternoon rainstorm pushed the program back about a half-hour, with the first heat not getting on the track until 7:27 p.m.

Johnson led all 35 laps of the modified feature, but had a couple of scary moments.

The first came on lap 17. Rocky Warner, who had started sixth in the Jake Spraker-owned small block, was second after just three laps, thanks to two early cautions, and on lap 17, had his best shot at getting past Johnson, making a deep run into turn three.

But Warner realized he had gone in too deep, and ended the banzai run before he and Johnson had a disastrous encounter.

“I almost spun myself out,” said Warner, who got the better of a late duel with Ken Tremont Jr. to finish second for the third time this season. “I got the car sideways and then saw him start to come down, and thought, ‘Holy (expletive)’ ”

But Warner kept the pressure on Johnson and nearly got another shot at the lead on lap 26, when Johnson came up on two lapped cars that were racing side by side.

But just as Warner pulled right up on Johnson’s rear bumper, Ricky Davis went into the wall, bringing out another yellow and putting Johnson back in clean air.

“Starting up front really helped,” said Johnson. “The track was narrow and I knew it was going to be tough to pass. Starting up front allowed me to have a perfect line, and I think that was the key factor. The cautions helped, because they got me out of the lapped cars.”

There may have been another factor, but no one will ever know for sure. Because of the Centennial Weekend at Orange County Speedway, modified points leader Marc Johnson, three-time winner Peter Britten and defending track champion Brett Hearn were all racing in Middletown Friday night.

Completing the top five behind Johnson, Warner and Tremont were Jessey Mueller and Matt DeLorenzo.

Connor Cleveland finally got the monkey off his back with his second win of the year in the 25-lap sportsman feature. Cleveland’s other win came on opening night on May 10.

He started 14th in the 30-car field Friday night, but was hooked up from the start and had worked his way up to the top five after just six laps. He was third by lap 10, and then passed Stephen Kneer in the fourth turn on lap 17 to take over second.

Jon Miller, who had started on the outside pole and led the first 18 laps, was no match for Cleveland’s hard charge, and really couldn’t do anything when Cleveland took the lead for good coming out of the third turn on lap 19. The win allowed Cleveland to scrape a couple of more points off the lead of Tim Hartman Jr. in the battle for the sportsman crown.

Jack Speshock was second, matching his best finish of the season, while Miller hung on for third, Hartman Jr. finished fourth after starting 17th, and Kneer was fifth.

Scott Towslee recorded his second win of the season in the 25-lap pro stock feature. The 16-year-old started fifth, but wasted no time getting the lead and then held off Chucky Dumblewski for the victory. The top two were followed by Nick Stone, Kim Duell and Josh Coonradt.

Thomas Van Vorst Sr. drove to his first career win of the 20-lap Haun Welding limited sportsman feature. Van Vorst started fourth, but had the lead after just two laps, taking the top spot away from Tyler Rapp, who had started on the pole.

Van Vorst had a huge lead negated by a yellow flag midway through the feature, but he easily pulled away from Shane Larman over the final 10 laps to get the victory. Payton Talbot finished third, while points leader Dylan Bokus was fourth.

The 15-lap Lake Auto Parts street feature featured another battle between old rivals Randy Miller and Al Relyea. Miller, who started eighth in the field, immediately went to the outside groove and had the lead at the completion of the first lap. Relyea then took second away from Dave Cook, and a restart on lap eight put Relyea side-by-side with Miller.

The Bear Ridge DMA USAC midgets made their second appearance of the year at Malta, with Jason Goff coming away with the victory. He was followed by Justin Phillips, Joe Krawiec, Jeff Horn and Tim West.

Will Hull, who was victorious the first time the midgets were at Malta, blew the engine in his car with two laps left Friday.