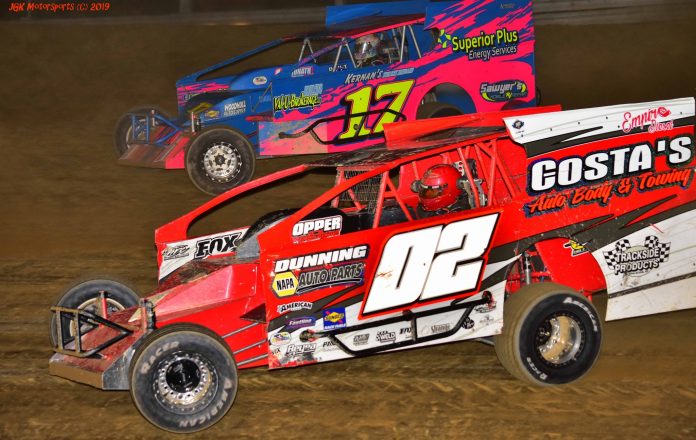 WOODHULL, NY – Fans and race car trailers rolled into the track as rain poured from the sky. Officials, drivers and fans kept hope as the sun peeked out on the northwest side of the track. As the sun got brighter the anticipation for racing grew. After a small rain delay the Ted White and the whole track prep crew had a smooth race track ready for the weekly divisions along with the 270-Micro Sprint Tour.

Stacy Jackson and Brian Doolittle brought the 19-car Insinger Performance Modified field. Jackson got the lead but points leader Cory Costa grabbed the outside lane and stood on the gas. Dayton Brewer fell in line behind him on the outside. Donnie Lawson led as the field came to a restart. Lawson and Costa ran side by side as they came down to lap four with Costa inching into the lead.

Brewer kept putting pressure on Lawson to take over the second position. Brady Fultz nosed into the mix to make it a three car battle. Van Pelt who started in the middle of the pack inched his way up to the top five by lap 11. A late race caution would reset things with Costa in first and Van Pelt following. Costa was right on with his restart and held off Van Pelt for the win. Brewer, Lawson, and Fultz rounded out the top five.

Joe Birdsall led lap one of the Joe Willcox Performance Automatics Street Stocks. Mike Williams and Jim Weatherley battled for second. Williams nosed ahead and put pressure on Birdsall for lead. Brett Marlatt and Mick Seeley battled for second place spot on lap five with Marlatt taking over the spot. Points leader Kurt Stebbins moved his way up the field and was third on lap seven.

Williams, Birdsall and Stebbins went three wide for the lead on lap ten. Birdsall got too high giving Williams the lead with Stebbins to follow. Stebbins and Williams battled but on lap 12 the lead would go to Stebbins. Marlatt and Seeley put pressure but couldn’t get by the Williams no. 19 machine. Stebbins grabbed another feature win with Williams, Marlatt, Seeley and Gardner rounding off the top five.


Steve LeBarron grabbed the lead off the drop of the green flag in the Cummings Trucking RUSH Crate Late Models. However a caution on the first lap would set the field back to an original restart. The restart didn’t impinge on LeBarron as he quickly regained the lead. In the back of the pack Jason Knowles and Kurt Stebbins battled for positions. Both caught LeBarron and put pressure on him; dodging lap cars in between.

LeBarron got high and caught the burm allowing J. Knowles to sneak by him for the lead. J. Knowles and Stebbins battled for the lead while Brian Knowles came up into third place. J. Knowles captured his fourth win this season with Stebbins, B. Knowles, John Haggerty, and Wayne Robertson completing the top five.

From the drop of Tony Van Pelts green flag, the Daugherty Auto Sales and Service Mini Stocks were fighting for positions. Lap one saw four wide racing action as they battled for the lead. Josh Webster went out to the point and started leading the way. Jason Ketrow came up through the field and found himself in second behind J. Webster.

After a restart points leader, Carter Crooker restarted from the third position. Crooker battled Ketrow and claimed second place just under the flagstand. Travis Webster worked his way back through the field after being involved in an early race caution. Crooker grabbed the lead on lap 15 and lead the remaining five laps to capture the win. Ketrow, Ray Hyer, T. Webster, and Rick Amidon finished respectively in the top five.

Two of the young guns of the NAPA Crate Sportsman class rolled off in the front row. Kaiden Dgien and Quinton Bucanhan led the 21 car field to green. Dgien grabbed the lead right away. Brett Buono took the middle lane off the green flag to grab race positions early. An early race caution put pressure on rookie drive Dgien but Dgien was hot on the restart; keeping his lead. Cole Youse powered the inside lane grabbing positions to inch closer to Dgien.

Youse, Tim Guild, and Kenny Peoples Jr. all battled for second place while Dgien moved in on the lap traffic. Youse and Peoples Jr. battled as Dgien weaved through the lap cars. Casey Pavlick who was involved in an early race caution made his way back up through the field as well. Driver battled for positions as they had plenty of racing room. Dgien captured his first ever NAPA Crate Sportsman win while Guild would settle for second. Peoples Jr, Youse and Pavlick would finish the top five.

Joseph Gillespie and Scott Lehman Jr. brought the Johnson’s Auto Supply FWD class to the green flag. Gillespie grabbed the lead but shortly Lehman Jr. and Codie Baker were up front to battle for the lead.

The battle was to the front most of the race as Lehman Jr. and Baker battled and took turns leading the race. Adam DelGrosso made his way into the third positon after battling for positions with Nick Brown. Lehman Jr. grabbed the win over Baker. DelGrosso, Brown, and Nate Freeland finished the top five.

Tess Johnson and Dylon Morseman led the Daugherty Auto Sales and Service Woodhull Warriors to the green flag. Johnson grabbed the lead forcing Morseman to take over second and wait to make a move. Behind them Josh Isaman and Brooke McClain battled to get to the front. Slight contact was made but both kept going. Cayden Lawson moved into the first position after starting third. Lawson grabbed his first win this season with Brody Amidon finishing in second. McClain, Jacob Tubbs, and Tess Johnson rounded out the top five.