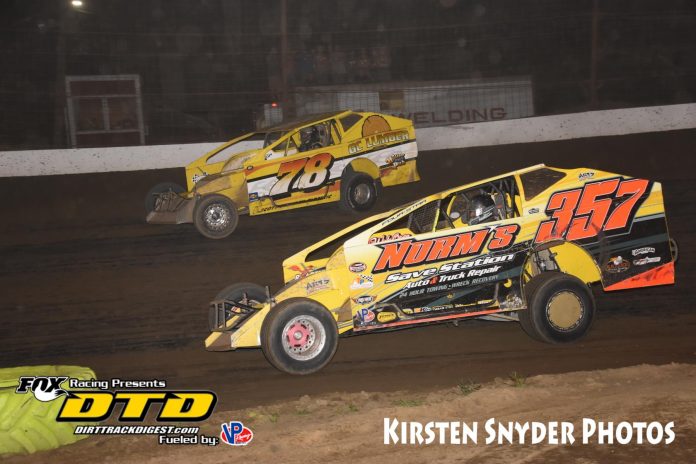 The current point leader worked for this one battling with John Willman from the 15th lap through to the finish. Normally Howard tends to pick the inside groove to make a pass, but the second week in a row he took the outside path and was able to overtake Willman with five laps to go to park the Norm Hansell-owned No. 357 in the winner’s circle.

Brad Brightbill decided that after three straight second place finishes in the TP Truck Equipment NASCAR 25-lap Sportsman features it was time to change that status and move it up a notch. That’s exactly what he did when he posted his fourth feature win with runner-up Kenny Bock closing in on him, but didn’t have enough laps to get the job done.

Providing the feature winners met the necessary requirements, they received monetary awards from T.P. Trailers and a certificate from VP Fuels for product awards. The Dan’s Deli ½-way hoagie award recipients were Willman and Brightbill. Parker Guldin, who finished 14th in the Sportsman feature received an extra $100 from the track for being the first crate engine running.

On Thursday, August 22nd a Thunder on the Hill Series doubleheader, a Bob Miller/Rogers Family promotion, will be presented featuring Tony Stewart’s Ollie’s Bargain Stores All Star Circuit of Champions 410 Sprints and 358 Modifieds. Racing will kick off at 7:30 p.m.


Saturday night action returns on August 24th with a tripleheader show of T.P.Trailers NASCAR 358 Modifieds, T.P.Truck Equipment Sportsman and Blast from the Past Vintage Racers. Action gets the green flag at 7:30 p.m. Adult admission is $15 and youngsters under 12 are admitted free.

Modified action saw polesitter John Willman, who has had more than his share of engine issues, grab the early lead with Dylan Swinehart, Richie Hitzler, Ryan Lilick and Eric Biehn in pursuit.

The caution flew with two laps completed after Mike Lisowski, another one having more than his share of misfortunes, was plagued once again and slowed in the fourth turn out of competition. After two false starts, Willman was still first, but now D. Swinehart, Joe Funk III, Hitzler and Howard completed the top five.

A three-way battle for second soon developed between D. Swinehart, Funk III and Howard with neither one ready to give up a position.

The red was thrown on the 13th lap when Hitzler hit the first turn wall with heavy impact and Nick DeSantis, left with nowhere to go, clipped the backend of the car. Thankfully no one was injured. Willman was still the leader, but now Howard was in the runner-up spot putting his bids in for first followed by D. Swinehart, Brett Kressley, who started deep in the 28-car starting grid in 24th and Funk III.

Howard made several bids for the lead underneath Willman, but none of them were successful.

With five laps remaining Howard switched to the high line to see if that would work. This attempt was a wise choice and he was now in first.

Howard never looked back once he became the new pacesetter and went on to chalk up another one in the win column. Chasing him across the line for his best finish of the season was Willman followed by Kressley, D. Swinehart and Kevin Hirthler.

A rarity in the Modified ranks was that ten time champion Craig Von Dohren, locked in a close point battle with Duane Howard, wasn’t an entry in the feature. Problems with his primary car in the heat forced him to switch to the back-up car for the consi. He also had issues with that and was forced to be a spectator the rest of the night.

Tom Miller, already a feature winner this year, took the early lead in the Sportsman feature with Parker Guldin, Bock and Sean Weiss in pursuit.

Jimmy Leiby hit the homestretch wall with heavy force which caused the red to be thrown. He was slightly shaken up a bit. Miller continued to show the way on the restart with pressure now coming from Chris Esposito, Bock, Brightbill and Guldin.

The lead changed hands for the third and final time when Brightbill charged ahead in the Leindecker powered mount on the 12th lap.

Bock overtook second on the 18th lap and set sail after Brightbill who had a slight edge built up over the field.

In the closing stages Bock was reeling in Brightbill, but time fell short and Brightbill was in the winner’s circle. Following Brightbill and Bock across were Esposito, Brian Hirthler and Ryan Beltz.

Kyle Smith, Bock and Guldin were the heat winners.

With Guldin finishing 14th in the Sportsman feature he earned a Crate Sportsman bonus.

Advance tickets for the September 21 Freedom 76 are now on sale. Mail a check or money order covering the number of tickets being ordered to Grandview Speedway, 87 Wilt Road, Bechtelsville, PA 19505. Advance adult tickets are priced at $35 while tickets purchased on race day will be priced at $40. Youngsters 6 through 11 pay $10. Under six are admitted free. Please include a self-addressed envelope to speed delivery. Tickets will not be mailed after September 13.