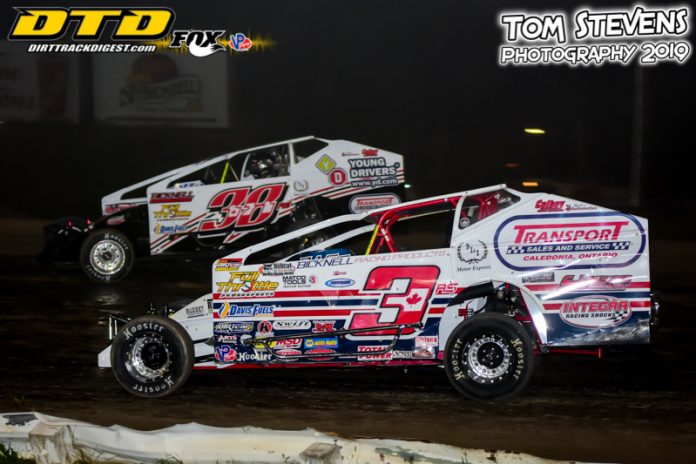 Bill Podwinski and Rob Knapp brought the S&W Service Centre 358 Modifieds to the green flag for their main event with Knapp showing the way. Ryan Susice would move into third and would challenge Scott Wood for second place. Susice would take over second and would go after race leader Knapp. A couple of early race cautions would bunch the field back up. After a lap nine restart, Susice would take the lead away from Knapp as Todd Gordon would move into second on lap 11. Mike Bowman would move back up through the field and would enter the top five on lap 15 and would go after Tim Jones for third place. Bowman would continue his march to take over second from Gordon on lap 19 and would clear the position on lap 20. Susice would stretch the lead over Bowman as Pete Bicknell took over third from Todd Gordon. Susice would hold the lead and would go on to score the win, his first of the season.

Brad Rouse and Brent Begolo brought the field to the green flag in the finale of the King of the Crates David Chevrolet DIRTcar Sportsman with Rouse showing the way. Rouse would start to stretch the lead as James Michael Friesen took over second place from Begolo. Race leader Rouse would hit lap traffic on lap 10. In lap traffic, Friesen would be able to start to reel in Rouse who had over a 1.5-second advantage over the second-place runner. Lap traffic played havoc on the field and would allow Begolo to reel in Friesen for second while Rouse continued to open up the lead. Begolo would move into second after battling with lap traffic and would go after race leader Rouse. Rouse would hold off a hard-charging Begolo to score the feature win and would clinch the King of the Crates Championship.

Jason Fontaine and Brad Sheehan were on the front row for the Hoosier Stocks feature event and it was Sheehan taking the lead as Rob Murray moved into second with Billy Bleich Jr, Dave Bailey and Fontaine racing in the top five. Billy Bleich Jr would take the lead away from Murray on lap five. Bleich, Murray, and Bailey would pull away from Fontaine. Fontaine and Dave Small got together on the front straightaway to bring out the caution on lap 12. The lead trio of Bleich, Bailey, and Murray battled for the lead off the restart with Bailey taking over the lead on lap 14. Bailey would go on to score his third feature win of the season.

Cheeseburger Iftody and RJ Pietz were on the front row in the main event for the Doidge Building Centres Mod Lites with Iftody taking the lead from the drop of the green. Iftody and Tyler Winger would pull away from the field. Winger would take the lead away from Iftody on lap nine, as Josh Sliter battled with Brent Begolo for third place. Sliter would battle with Iftody for several laps and would reel in Winger for the lead. Winger would hold off Sliter to score the win.

JJ MacDonald and Tina Ronning led the Dave’s Auto and Speed Centre V6 feature to the green flag for their feature event with Ronning showing the way. Josh Dymtrow would clear Ronning for the lead on lap three as Dave Hahl and Kevin Conley battling for third. Dymtrow would start to pull away from the field as Conley continued to pressure Ronning. Dymtrow would go on to score the win over Conley and Ronning.

NEWS AND NOTES:  94 cars signed in pitside for the racing action. Fans had the opportunity to see their favorite drivers on track during the popular autograph session. The speedway would like to welcome the groups associated with the Merrittville Speedway Gives Back Program.

The road to the 2019 Merrittville Speedway track championships continues Saturday, August 24 as Fastek Power Tools & Fasteners will present a full Bobcat of Hamilton Weekly Racing Series program. Pit gates will open at 5 pm with grandstands opening at 5:30 pm and showtime will be at 7 pm sharp.