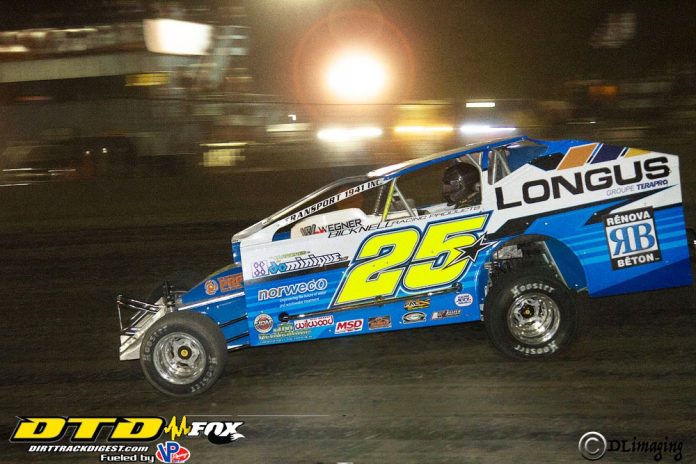 CORNWALL, ONT – Jim’s Performance Plus presented the popular autograph night along with the Sisters for a Cure 50 in the Pro-Stock and the final races for the Weekend Warriors Series in both Pro-Stock and Mini-Stock.

CD Beauchamp led the way in the Sisters for a Cure 50 over Marc Lalonde and Dave Bisonnette. Roch Aubin made his way to second spot, with Lalonde third and Dave Seguin moving up to fourth. The first 20 laps went quickly as Steve Brady stopped in the backstretch and caution was out on lap 21. Beauchamp in the lead with several position changes behind the leader as Marc Lalonde moved to second in the final portion. Beauchamp went on to win the event over Lalonde and Seguin. With his win, Beauchamp secured the championship with 1 point over Roch Aubin and 3 over Lebrun. Bruno Cyr left with 2 bonuses, the top Quebec invader and the hard charger. Burton Ward won the hard luck award as Jay Fitzgerald won the top American invader. The Grace Foundation will receive a nice $4,900 from several people.

In the Loud and Dirty Modified feature, J-F Corriveau took the led over Stephane Lafrance and David Hebert. Caution was out on lap 3 for Chris Herbison. Corriveau was still the leader with David Hebert on his tail while Chris Raabe moved up to third. Hebert used the middle lane to take the lead over Corriveau on lap 13 as Bernier moved up to third. Bernier made a good move to pass Corriveau and chased Hebert. A lap 17 caution helped Bernier as he gained the lead on lap 19 and never looked back and captured his second win at Cornwall this season.

In the Next Level Home Improvement Sportsman feature, Shane Pecore to the initial lead as Gabriel Cyr moved to second with Ryan Stabler in third. Several cautions slowed the first portion of the feature with Pecore keeping the lead. Pecore in front with Ryan Stabler moving up to second with Cyr in third. Pecore never looked back and capture an 8th feature at Cornwall in 2019!

In the 20-lap Weekend Warriors Mini-Stock Series, Justin Jodoin and Yanik Potvin exchanged the lead as Potvin took it for good as Mike Gaucher started to make some noise after starting in 12th with James Clarke in third. A good battle until the end as Potvin went on to win his second feature in a row over Gaucher.


It is the show that you do not want to miss this coming Thursday, with the Race for the Cure 150 along with the DIRTcar Sportsman Series.