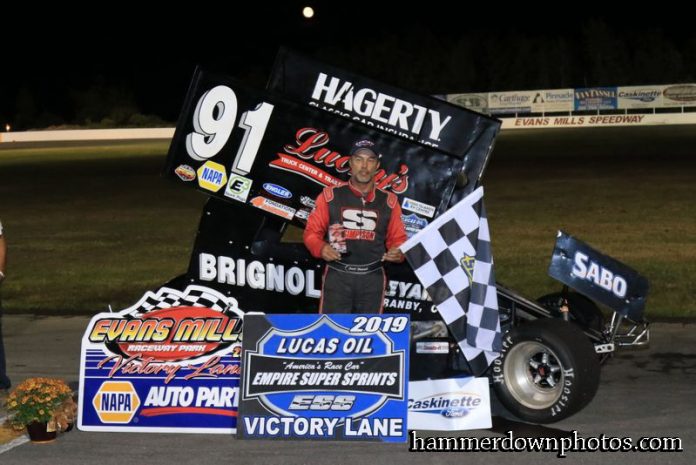 EVANS MILLS, NY – Lucas Oil Empire Super Sprint veteran Scott Holcomb made a long tow from Granby, CT pay off by going wire to wire in winning the Kevin Ward Jr. Asphalt Spectacular at the Evans Mills Raceway Park on Saturday night. The victory was Holcomb’s eighth career on the ESS circuit and it was worth $4,000 plus lap money.

“This is just my third time on asphalt so this is a surprise,” said Holcomb, “We just kept making little adjustments as the night went along and it seemed to get faster, especially when we moved the wing back.”

Holcomb did draw the pole starting spot and got the jump on his front row mate Kelly Hebing. Before a lap could be completed the yellow was out for Dave Axton who made contact with Denny Peebles. Axton had to be towed to the pits. On the restart it was the same result with Holcomb taking command.

The race went non-stop until lap 22 when the yellow came out for a slowed car.

“It was getting a good groove until the yellow late, I’ll tell you I didn’t want to see that yellow!” Holcomb noted, “Jeff (Cook) is good here and he has practiced here, when I saw him along side I knew I needed to get a good restart. My car took off and I guess it worked out well.”

Holcomb indeed did get a good restart and held off the local favorite for the big win. Cook was second which made many of the hometown fans happy. “I was fast but as you can tell on that restart I just wasn’t quite fast enough,” Jeff continued, “Congrats to Scott, they work hard and travel a lot of miles to race with us, glad he got the win.”

Dylan Swiernik made a late race pass to get third and being on the podium was very special for him as he was one of Ward’s best friends. “To be here on the podium for this race in Kevin’s honor really means a lot to me,” said an emotional Swiernik, “The Ward family has helped me out so much over the years and it was real nice to see them have a. good night for Kevin.”

Rounding out the top ten were Tommy Wickham, who made his first ever sprint car start on the asphalt, Matt Tanner, Hebing, Peebles, Kyle Moffit, Tyler Cartier and Shawn Donath.

A big crowd came out to watch the winged machines at Evans Mills which is under new management of Lee and Peggy Gill. Plans are already in the works for the event in 2020.