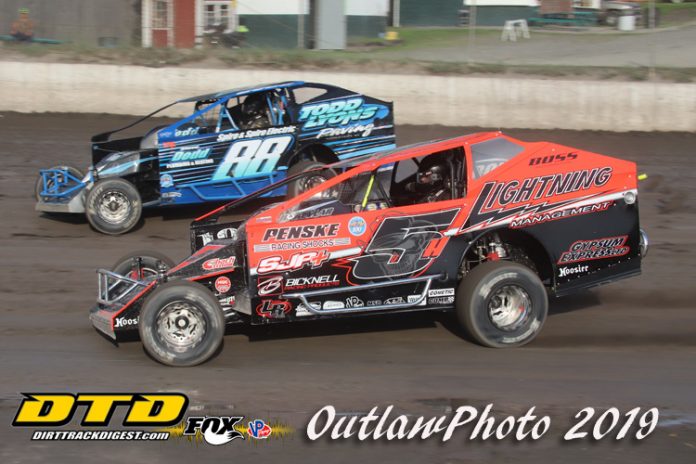 The last time Chris Hile competed at the Orange County Fair Speedway was back in 2007. Needless to say, a lot has changed at the Middletown, N.Y., oval since then.

It may have been over 10 years since Hile raced there, but he looked like a seasoned veteran at the facility earning three solid finishes for his family owned team.

The Brewerton Speedway regular started the week with an 11th place finish in the Super DIRTcar Series race on Thursday. He came back Friday to finish 12th in the 80-lap feature before placing in ninth in the finale. After a final tabulation, Hile came out of the weekend with nearly $10,000 in prize money.

“We are super happy,” said Hile on Saturday night. “The car was awesome. We were actually better car than where we finished tonight. I think we were actually a sixth-place car.


“At one point we were underneath Billy (Decker) down the backshoot. We couldn’t get by him in the lapped traffic. Then we lost a couple spots late on that last restart. I don’t know what going on there.  It was a melee.”

It seemed as the week went on Hile continued to improve. Saturday night he ran the entire race inside the top 10 after making the redraw from his heat race. His car was the best on Saturday night when it counted.

“We were consistent,” mentioned Hile. “We had speed early in the night. The first two nights we struggled with forward drive and stuff. Every day we got a little bit better. That is always good to go in the right direction with adjustments and stuff like that.”

Hile made the decision to make the trek south as a result of the posted purses. Even smaller teams had the opportunity to make some money. It wasn’t just about wins. The purses paid well throughout.

“It was really cool for them to put on this event,” commented Hile. “To pay all that money through the field is fantastic. For us to come down here was a good money maker. It was a good experience.”

After the solid finishes, Hile is hoping this is a sign of good things to come. He’s going to use the experience of the weekend at Middletown in a few months when he makes the short tow closer to home for Super DIRT Week at the Oswego Speedway.

“I’m really excited to look ahead to Oswego,” stated Hile. “This is pretty similar. The surface, the way they have it right now, the shape and things like that. I think we’ll have a pretty decent car for over there right now too. From here to there we just have to keep everything straight.”