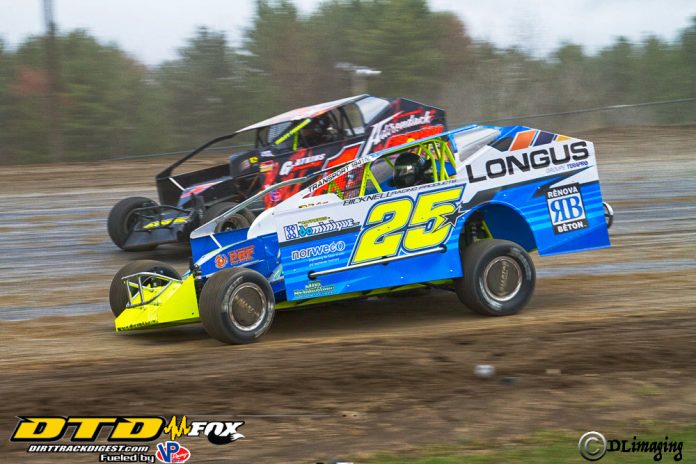 PLATTSBURGH, NY – The best DIRTcar 358 Modified drivers in the Northeast will descend on the Northern New York town of Plattsburgh, NY this coming Tuesday, August 20. The $4,000-to-win 100-lap Feature is presented by Leary Restoration.

The tale of the tape so far in 2019 has been the outstanding duel between Mat Williamson and Erick Rudolph.

So far Williamson has a leg up on Rudolph in the standings but it’s only by thirty-five points. Williamson will need to be near perfect to hold on to that lead as Rudolph is red hot in both his 358 Modified and Big Block Modified.

Rudolph outdueled Williamson in the last Series race at Utica-Rome Speedway. Neither driver has been finished out of the top five but Williamson’s three wins gives him the edge in the standings.

Plattsburgh Airborne Speedway’s very own Mike Mahaney rides in third place and has had this race circled on his calendar since it was announced. The No. 35 Huttig machine has been at the front in Hoosier Racing Tire Weekly Championship action all season long. Can he use home-field advantage to advance on the No. 6 and No. 25R at the top of the standings?

Newly minted Hall of Famer Danny Johnson has had an impressive showing so far in 358 Modified Series action in his red No. 83x. The Doctor rides in fourth place going into the 100-lapper in Plattsburgh.

Dave Marcuccilli has found success in the 358 Series and currently sits in fifth place. For years Marcucuccilli has dominated in the DIRTcar Sportsman ranks but in 2019 he’s proven his ability to take his 358 to the front.

Corey Wheeler, Kyle Dingwall, Jordan McCreadie, Ronnie Davis III, and Lance Willix have made all Series race so far in 2019 and they fill out the rest of the top ten. One exception is Tim Fuller, who won the first Series race of the season. Fuller has made four starts but was sidelined for one due to an ankle injury. He’s in seventh.

Current Plattsburgh point leader Steve Bernier will be out to defend the home turf, along with Chris Raabe, Danny Gagne, Jessey Meuller, and others. Drivers from Quebec, the North Country, and Central New York are expected to make this year’s tour stop at Plattsburgh one to remember.

Also on the card are the DIRTcar Sportsman Modifieds for some Hoosier Racing Tire Weekly Championship action. Fans and competitors should note that Wednesday, August 21 has been set up as a rain date.