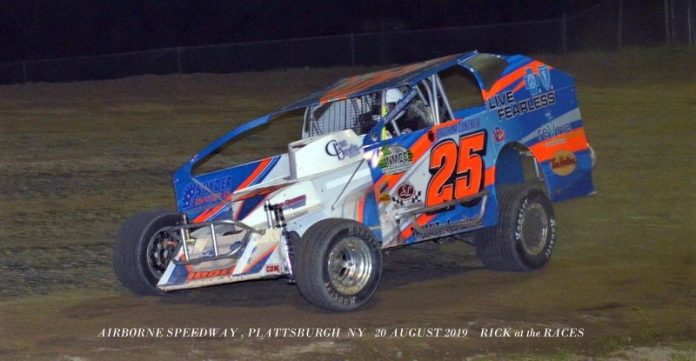 PLATTSBURGH, NY – Home-track hero Lance Willix II passed two of the best DIRTcar 358 Modified Series drivers Erick Rudolph and Mike Mahaney on a mid-race restart. Willix battled tooth and nail until a lap 90 red flag incident stopped the race. On the restart, Erick Rudolph got the better of No. 31 and powered on to visit Victory Lane. Tim Fuller battled hard inside the top five all race and finished on the final step of the podium.

Erick Rudolph and Mike Mahaney brought the thirty-car field to the green flag. Mahaney got the initial jump on the outside and powered away from Rudolph. The No. 25R battled back and traded blows with Mahaney. Then on a restart, Plattsburgh regular Lance Willix II passed both of the dueling leaders in one shot.

The No. 31 used a unique racing line where he entered the corners low and hooked the left side tires on the edge of the track. This seemed to rotate the car and allow Willix to get on the throttle earlier than Rudolph or Mahaney.

Willix kept up his pace and maintained the lead until a dramatic incident on the front stretch brought out the red flag.

As witnessed, Kyle Dingwalll made contact with the front stretch wall and veered in front of oncoming race traffic. Several cars, including Steve Bernier and Jessey Mueller, slid through the infield, which caused Mueller’s car to flip and land on top of Bernier.

The high level of safety standards mandated by DIRTcar were put to the test and once again all drivers walked away.

The battle at the front was far from over.

“We had a lot of time to sit there and think. I didn’t know if I’d have an opportunity to pass him,” said Rudolph.

Throughout the race the implement tires at the inside of the track get clipped and can change the preferred racing line depending on where they move,

When the field went back to green on lap 90, Rudolph had to make a calculated move.

“That tire down there was in the infield for a long time and it had everyone glued to the bottom. It moved up a bit and made the track racy again. We were able to make the move around him [Willix],” Rudolph said of his racing-winning move.

That move made Rudolph and his team $4,000 richer. This was the second time the No. 25R has visited Victory Lane in Series competition in 2019.

He noted “I’ve only been here three times. I did a race here one time when it was asphalt. Track time helps anywhere you go.”

Rudolph is heading to Cornwall Motor Speedway for their Race for the Cure 150 DIRTcar 358 Modified $12,000-to-win race on Thursday, August 22. The DIRTcar Sportsman Modified Series is in action as well.

“This is the way we want to end the year. On a high note. We have momentum going into these big races at the end of the year. To be able to compete with Erick and Timmy and all these guys, it means something to us,” said Willix.

Tim Fuller powered his way up to finish in third.

“I had the second-best car on the track. Erick and Lance did a really good job. It was a long race and fortunately, we ended up in the top three which is good any time you get into what of these deals,” Fuller said in Victory Lane.

The Billy Whittaker Cars Fast-Time Award winner for Plattsburgh Airborne Speedway was Steve Bernier. Unfortunately, Bernier’s car was heavily damaged in the red flag melee on the front stretch resulting in a DNF.

A driver in a randomly determined finishing position is awarded one free Hoosier Racing Tire. Michael Parent, on the virtue of finishing in seventh position, is awarded the free tire certificate from Hoosier.

The next DIRTcar 358 Modified Series race is at Can-Am Speedway on September 7.