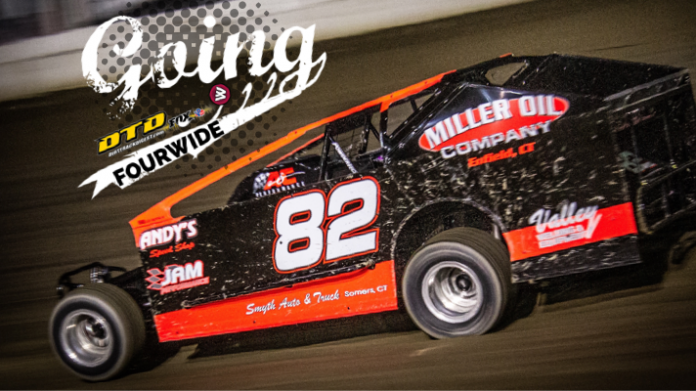 FOURWIDE / Brian Peterson – Lebanon Valley Speedway Small Block Modified driver Brian Peterson checks in after his win on the high banks. Brian breaks down the night and trials and tribulations of chasing the checkers.

This win tops the rest of my wins, bar none. We ran well in the heat race started 2nd and almost grabbed the lead running the bottom lane on a restart. Anybody who runs Lebanon knows that restarting on the bottom isn’t your first choice! I got shuffled back a bit as my chassis was off just a tick. After the heat race I chatted with Kyle Hoffman who suggested a few changes for our DKM Cyclone chassis, which proved to be just the ticket. I started 3rd, and quickly followed the 88jr of Olden Dwyer past the 250.

On the next lap I had a great run through turns 3 and 4 but got into Olden a little, getting him crossed up. I backed out of it and let him gather his car up, yet he left the outside open entering turn 1 and I used that to snatch the lead! After that it was clear sailing, hitting my marks for the next 21 laps to take down the checkers.  Looking back on it now it was anything but easy, but the track was in excellent shape and the car had great speed which made it seemingly effortless to pilot around the high banks!

My season had been rough at best to date. Constant engine issues sidelined us since opening day and the week before this win the team and I decided to take our engine repairs into our own hands. The Sunday before we removed our cylinder heads and took them to a machine shop to be repaired. As Thursday evening of that week rolled around I had pretty much eliminated the idea of racing that Saturday as I did not want to rush the engine back together. At 430 on Friday the machine shop called and said that all of my parts and my heads were ready for pickup. Something told me I HAD to get that engine back together. I had a family party till about 9 on Friday, then I went to my shop and got to work. Alone, I assembled my engine one head bolt at a time. Prior to Friday, I had never installed a cylinder head on any vehicle, let alone a performance engine! Working steady until 2am Saturday I got every piece in place then headed home for a break. At 930 Saturday I returned with one crew member to put the finishing touches on the car, loaded it into the trailer and left for the track, and hour later than usual. Once at the track I found the engine to run flawless with zero leaks, much to my surprise!

As of August 10, 2019 it had been 7 years and 11 months since my last feature win, which was in the sportsman division. If someone had asked me two weeks prior if I were going to be able to win a feature event this season my answer would have been absolutely not. Of course not for a lack of trying on the part of my team! As the night wore on more friends and family arrived at the track, My mom and dad, both of my young sons, my brother and his whole family. One of my crew members who hasn’t been with us since the birth of his twins back in May, was in attendance as well. His two cousins and one of their wives were also there. This all was an oman. Back on July 31st two of my crew members suddenly lost their dad, and most of the people coming to the track were either his family, or close friends. Ralph Anderson was putting this win together for me and I didn’t even know it! That night everything just went right, I truly feel that Ralph Anderson and Brandon Pitcher were along for the ride. Hope you enjoyed your flight boys!


I really need to thank my wife Meaghan, my mom and the rest of my family. My crew, Russ, Josh, Ray, I couldn’t do this without these people! Miller Oil Company, Valley Welding and Equipment, Chestnut Package store, Smyth Auto and Truck, Napa Auto Parts, Jam Performance, Andys Speed Shop, DKM Fabrication, FAST Axle, Henrys Exhaust, Rem Shift and the fans. We would be nothing with out the great fans coming out each and every week to take in the show.

I would like to add a special thanks to all of the racers and crew chiefs that I have chatted with and gotten tips from over the years. Frank Hoard III, Danny Sanchez, Scott Duell, Neil Stratton, Andrew Phillips, Joe Matthews, Dave Constantino, Kyle Hoffman , Chris Kokosa and Mike Middleton. Thank you guys!

I chose the number 82 because that was the year I was born. I started racing back in 2002 and it has just kind of stuck since then.

MONEY ASIDE, WHAT TYPE OF CAR WOULD YOU LIKE TO RACE?
Money aside I would love to race the world of outlaw late model tour. Personally I think these are some of the most intense race cars on the planet!
WHO IS YOUR BIGGEST RACING INFLUENCE?
My biggest racing influence would have to be my crew. These guys never turn their backs, never back down and don’t take no for answer. I have learned from this over the years and I try to apply the same enthusiasm and positivity to each event that we attend.
WHAT IS THE BEST ADVICE YOU HAVE RECEIVED?
The best advice I was ever given was right at Lebanon Valley. Back when I was struggling in the sportsman division, one of my pit neighbors saw the issues I was having so he decided to chime in.  ” You better learn how to lose, before you learn how to win. You are going to do a lot more losing than winning”- Thank you Everett Kneer! I will never forget these words!