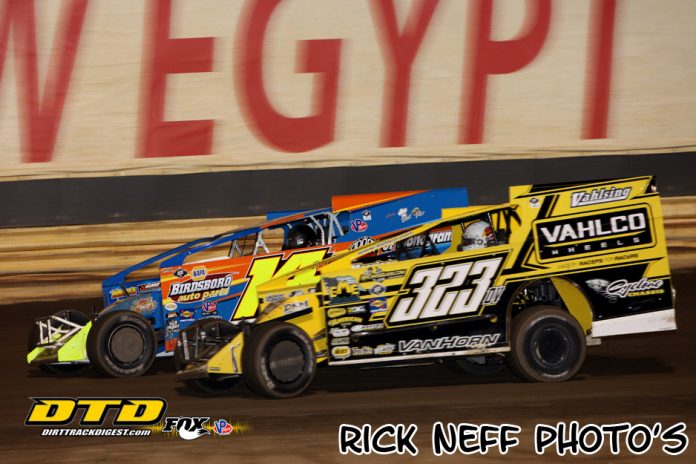 “We already got two wins here this year, but to get a Series win here is really cool,” said VanHorn in victory lane.

Wade Hendrickson took control at the drop of the green for the 40-lap main, followed early by Ryan Watt and VanHorn. VanHorn wasn’t content riding around in third in the opening laps, working under both Watt and Hendrickson to lead on lap four.

From there, VanHorn quickly built up a good gap before Anthony Perrego slid to a stop on lap eight. When racing resumed, VanHorn went back to work, pulling away from Hendrickson, Watt, and now Brandon Grosso.


VanHorn added to his lead every lap, summing up to a full straightaway on lap 15. Lap 15 also saw Richie Pratt and Jeremy Smith both have trouble, which made the yellow fly again. Watt did not have a good restart, slipping back to fifth as Grosso and Danny Bouc got by.

Bouc was on a mission, clawing by Grosso and Hendrickson to steal second on lap 17. Just as Bouc got the spot, Billy Pauch Jr. slowed for a yellow. While VanHorn had spent the whole race on the bottom, Bouc was making all his passes up top.

When the green waived, VanHorn and Bouc went back to their respective lanes, which favored the charging Bouc. Using the cushion, Bouc drove by VanHorn to lead lap 19, but as soon as the pass happened, a six car pileup at the back of the field made the caution fly again. However, the lap counted, and Bouc was scored the leader.

Bouc did not have a good restart, and handed the lead right back to VanHorn when the race resumed. VanHorn switched lanes and took the top away, then slowly started to pull away from Bouc. The good run Bouc had ended on lap 24, when he slowed with a flat right rear tire, which sent the yellow flag waiving again.

“I started to see the bottom get a couple black streaks in it, I was thinking of jumping up top before Bouc got to me,” VanHorn said. “He got me, then the caution came out. We got to restart on the bottom and were able to take the lane away.”

Matt Sheppard started 13th and was up to sixth, but had a right rear pop a lap after the restart too. Through all this, Grosso had finally got by Hendrickson and slipped into second. The new runner up didn’t phase VanHorn, as he once more drove away from the pack.

Just as VanHorn’s lead once more reached comfortable levels, Sheppard, Jeremy Smith, and Billy Osmun collided in turn four to draw another caution on lap 33. VanHorn didn’t ditch Grosso on this restart like he had before, as Grosso hung within a carlength for the first couple laps.

After momentum got built up, VanHorn started to pull away once more and looked to be cruising to the win. With two laps left, Osmun came to a halt on the backstretch, and the yellow flag flew one last time.

This time, VanHorn had a much better restart, instantly putting a second between himself and Grosso in the two-lap dash. The good restart was all VanHorn needed, as he crossed under the checkered flag first for his second Short Track Super Series victory.

Grosso came home second.  Grosso has came close to scoring a win on the Short Track Super Series before, but Tuesday night was his closest shot yet.

“Hats off to David, he ran a great race,” said Grosso. “We’ve came close to winning these races before, but whenever I’m running good something bad always seems to happen. This is my first finish on the podium on the STSS so we’re getting closer.”

Watt had a see-saw race, starting up front, dropping back some during the middle, then climbing back to finish on the podium.

“We brought our spec motor here tonight,” noted Watt. “Early in the race I didn’t have enough motor to drive around people, so I kind of just rode in line around the bottom. However, as the track dried up it kind of came back to us and we were able to make some moves at the end to get back to third.”

Mike Gular made a late charge to finish fourth with Hendrickson completing the top five.