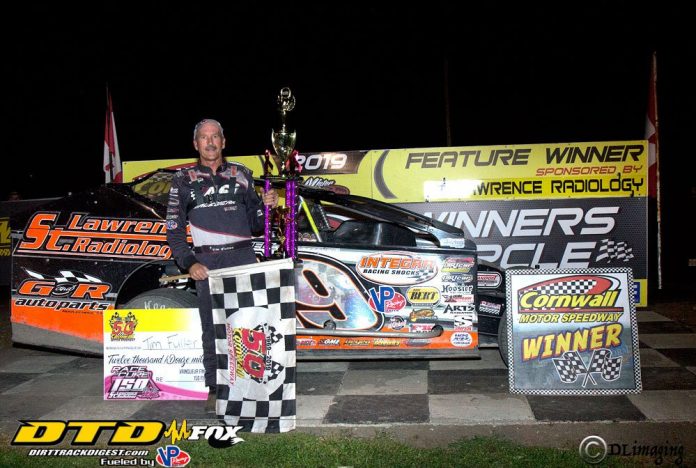 Tim Fuller only led about 150 feet of the 150-lap Modified special at Cornwall, but he led what mattered. Fuller darted by Mike Maresca off the last turn to score the $12,000 paycheck in the Race For The Cure 150.

Gary Lindberg was the early leader in the 150-lap feature, setting the pace over Brian McDonald and Mat Williamson. With 32 cars packed into the tight Cornwall confines, lapped traffic hit early and hard, with Lindberg getting into it by lap 10.

Williamson used the heavy traffic to get second from McDonald, then taking advantage of a bottled-up Lindberg to lead lap 15. Luke Whittaker showed speed early, battling with McDonald for third, then fighting for second as both Whittaker and McDonald moved by Lindberg on lap 22.


Through the early-race battles, McDonald found lots of speed on the extreme top of the track. On lap 32, McDonald used this lane to blast by Williamson and into the lead. Behind him, Maresca was making headway in that same line, clawing by Lindberg, Whittaker, and Williamson to be scored second on lap 46. The first yellow flag of the event waived on lap 54, as Carey Terrance and Mike Stacey came together.

Maresca went towards the middle of the speedway on the restart to try and get by McDonald, and while he repeatedly poked a nose out front, Maresca couldn’t clear for the lead. Meanwhile, David Hebert had quietly worked his way up to third and was gaining ground on the leaders running the extreme bottom lane, a line neither of the top two had experimented with.

Dominic Dufault slowed with mechanical issues on lap 72, setting up another restart with Maresca alongside McDonald. This time, Maresca got a great launch and stole the lead on lap 77.

McDonald’s race slowly started to go downhill from here, as he dipped a right rear off the backstretch the next lap and dropped to fifth. Combined with a plowing tight racecar, McDonald wasn’t having fun any longer. While McDonald fought his car, Maresca was continuing to have fun, as he pulled away from the second place battle between Hebert, Williamson, and now Tim Fuller. By lap 100, Fuller was putting serious pressure on both drivers for the second and third spots.

The caution flag waived on lap 113 for a two-car wreck near the back of the field, erasing the lead Maresca had. However, Maresca fired well on the restart and once more pulled a gap on Hebert, Williamson, and Fuller. The latter three continued their fierce battle as the race wore on, with Hebert hanging onto the spot by a thread. By lap 130, Maresca’s lead had stabilized at about two seconds.

Hebert did a great job defending second, but couldn’t hang on forever, as Williamson blew by up top on lap 137. With ten laps left, Fuller also slipped under Hebert, working the very bottom to get the spot. Once Williamson and Fuller cleared Hebert, they both rapidly closed in on Maresca, cutting the gap in half in just a couple laps.

A pack of lapped cars were tough for Maresca to get through, but even harder for Williamson, who surrendered second to Fuller on lap 144. Fuller ended up getting through the traffic well, ditching Williamson with a handful of laps remaining, and still time left to go chase down Maresca.

With open track in the last laps, Maresca went to the middle of the surface, while Fuller continued peddling the far bottom. As the white flag waived, Fuller was there, and dove to the bottom entering turn one.

The pair exited turn two door-to-door, racing even into turn three. Fuller hit the final set of turns perfectly, completing the pass and beating Maresca to the line to score the $12,000 victory in a thrilling finish.

“First and foremost, Mike Maresca drove a great race,” Fuller said. “He got bottled up a little and I took advantage of it. When you’re running in second, you have a little bit of an advantage. I didn’t even know it was the last lap, I came around and the scoreboard was flashing 150.

While Fuller was obviously happy with a five-figure payday, Maresca was left with mixed emotions. Happy to run that well, but disappointed to give up a win with a corner to go.

“We had a good car, everyone worked hard on it,” Maresca said. “That was my fault. We had the car hooked up, and I just left him a little bit and that’s all he needed.”

Williamson crossed the line in third after leading early.  He was followed by Mario Clair and David Hebert to complete the top five.