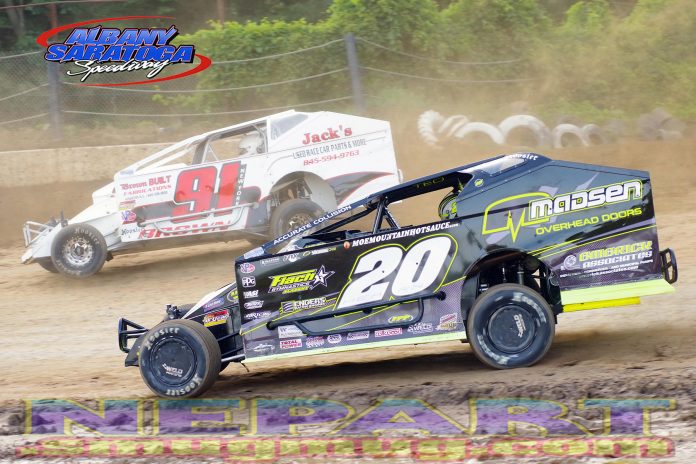 MALTA, NY – Although a flat tire two weeks ago wiped out any hopes Brett Hearn had of defending his modified point championship at Albany-Saratoga Speedway, that didn’t mean the Jersey Jet was going to take the rest of the season off.

Hearn, taking advantage of a good starting position, drove to his third win of the season and 136th of his career Friday night in the 35-lap modified feature at the historic Malta track.

Although the records will show that Ken Tremont Jr. finished second, it was Mike Mahaney who teamed up with Hearn to give the fans an edge-of-their-seat battle.

Hearn, who started sixth in the bulky 33-car starting field, quickly found that the top groove was the quickest way around the track, and was up to third after just six laps. He then rocketed past Matt Depew for second the next time around.

Jim Nagle started on the pole and set the early pace, but he was no match for Hearn, who nosed under Nagle in the third turn and then slid up in the fourth to move out front on the 13th lap.

Mahaney, who had started 11th, was also flying around the top and took over second on lap 14, and then kept switching lanes, looking for a way around Hearn.

Two cautions, one on lap 18 and one on lap 21, put Mahaney right alongside Hearn, and each time, Hearn took the top and easily maintained the lead.

But with two to go, Rich Ronca brought out the final caution of the race, and this time, Hearn went to the bottom on the restart. The way Mahaney had been running the top, it didn’t seemed like a wise move, but Hearn obviously knew what he was doing, because he got a good jump on the restart, and pulled away as Tremont, who had started 24th, got around Mahaney on the restart to finish second.

“I thought I had him (Mahaney) covered, but I didn’t want to give him any chances on the last restart. That’s why I switched lanes,” said Hearn after the win. “I felt like he was getting my timing just right.”

Hearn is the third three-time winner at the Malta track this season, joining Ronnie Johnson and Peter Britten.

Pat Jones recorded the first sportsman win of his career in the 25-lap feature in that division, but his win was overshadowed by a first-lap incident that put points lead Tim Hartman Jr. out for the night. When Justin Buff, who started fifth, got too low in the fourth turn and got sideways, all the cars behind him had to check up, and Hartman Jr. got slammed in the rear end, sending him to the pits without completing a lap.

Jones, who started third, went rim-riding out of the second turn on lap two to get the lead, and that’s where he stayed. He had a huge lead negated by a caution on lap 12, but quickly moved back out front. Brian Calabrese, who went from his 12th starting position to second after 14 laps, made a last-lap charge at Jones, but still finished a car-length behind.

“This kind of reminded me of a couple of weeks ago, when I almost had it,” said Jones, who had finished third on Aug. 9. “The top came in, and the bottom wasn’t working for me.”

Following Jones and Calabrese across the finish line were Andrew Buff, Jack Speshock and Joey Scarborough.

Davis Boisclair came away with his second win of the year in the 20-lap Haun Welding limited sportsman feature. Montgomery Tremont started on the pole and grabbed the early lead, but when his car started to develop a push, it left the bottom open and Boisclair took advantage, moving under Tremont coming out of the fourth turn on lap 10 to get the lead. David Richer followed Boisclair around the bottom, but couldn’t get close enough to force Boisclair to make a mistake. Points leader Dylan Bokus crossed the finish line third to open up what looks like an insurmountable lead.

Scott Towslee is really taking a liking to winning, chalking up his second straight win of the 25-lap pro stock feature. The 16-year-old Towslee, who started seventh, got the lead on lap nine and got two big breaks with yellow flags. On two separate occasions, Josh Coonradt had the momentum to pull alongside Towslee, but each time a yellow came out, allowing Towslee to restart in the lead. Those two yellows were huge factors in Towslee getting his third win of the season, finishing ahead of Coonradt and Jason Meltz.

Jimmy Duncan had what amounted to a Sunday drive in the 15-lap Lake Auto Parts street stock feature, coming away with his second win of the season. Mark Burch crossed the finish line second, but was set back to eighth for an incident early in the race when he made contact with Adam Tranka, forcing Tranka to momentarily lose control of his car and lose a number of positions.

The Greg’s Towing four-cylinder feature was won by David Frame, who easily beat Steve Ryan to the finish line. Robert Garney was third, and had the first single-cam car across the finish line. Jaxson Ryan was fourth, and Elmer Montville was fifth.