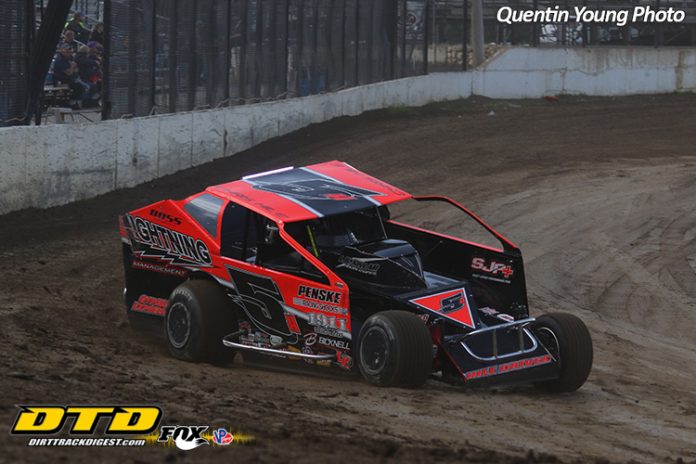 BREWERTON, NY – Chris Hile became just the second repeat winner of the season at Brewerton, and to do so, he had to pull off a late-race pass on the only other repeat winner, Tom Sears Jr.

Katelyn Hile set the pace early in the 35-lap Modified main, holding strong in the opening handful of laps with Roy Bresnahan in tow. Early movers were highlighted by Tom Sears Jr., who cracked the top five early, then got to third on lap ten. The next time by, second place Bresnahan broke, stalling on track and forcing a yellow. This put Sears alongside Hile on the restart, and Sears quickly darted to the lead.

While Sears set a torrid pace out front, Chad Phelps and Katelyn’s husband Chris Hile battled for second. By halfway, this battle tipped in favor of Hile, which left Phelps to fend off the charging red cars of Larry Wight and Billy Decker. On lap 22, Phelps lost a pair of spots at once, as Wight moved to third and Decker to fourth. However, this fight was a ways behind Hile, and even further behind Sears.

Sears had a comfortable three second lead at halfway, but as the race wore on, the gap slowly shrunk. On lap 27, Sears’ lead was forcibly erased, as an infield tire got punted into the racing lane, causing a yellow. This set up a restart with Sears, who had been running the bottom all race, alongside Hile, who had been making up time on the leader riding the cushion.


Sears knew he had company the second the race restarted. For a few laps, Sears played defense well enough to keep the lead, but couldn’t keep it forever. Coming to lap 30, Hile got a great launch out of turn four to drive around Sears and get the lead, but Sears wasn’t going down without a fight. Sears stayed within a couple carlengths during the final five laps, but couldn’t stop Chris Hile from scoring his second win of the season. Tom Sears Jr. finished second, while Billy Decker, Larry Wight, and Tim Sears Jr. completed the top five.

“He was a long ways out at one point, Tommy has been really good all year,” Hile said. “When we got that green flag stretch, I was looking at the gap and we weren’t chipping away at it too fast, so I just made sure I didn’t beat up the tire too early. I saw the top was there, really was just hoping and praying for a yellow, luckily we got it and our lane was wide open.”