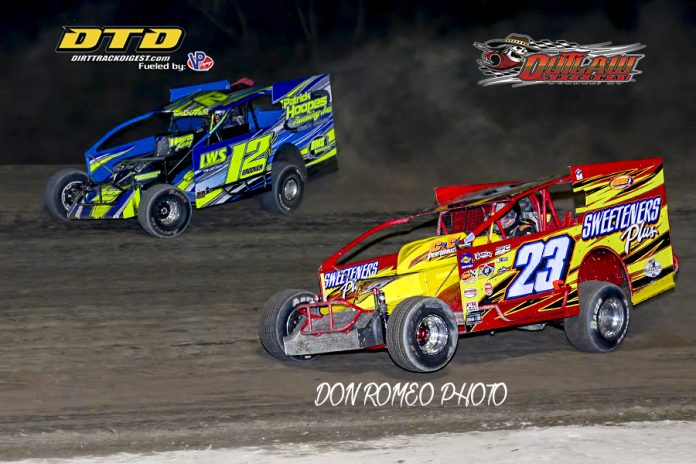 DUNDEE, NY – Any driver that competes against Matt Sheppard realizes that to beat the best they would have to be at their very best and that is exactly what Kyle Coffey did at Outlaw Speedway on Friday, August 23, 2019. Coffey also knew that he would need a little help in beating the man they call Super Matt and he got that as well in a 30 lap feature that saw very few cautions and Sheppard starting well back in starting field. Second generation young guns, Billy Paine and Coffey brought the 18 car Friendly Chrysler, Dodge, Jeep, Ram Modified field to the opening green and right from the get go Coffey jumped right to the very top of the 4/10 of a mile clay oval and drove away from the rest of the competition. Prior to the first yellow Coffey had over a full straight away lead and that pretty well set the tone for the entire feature. Clicking off near record laps all race long Coffey continued to show his dominance and even with a couple more yellow flags to slow the pace he was able to maintain a healthy lead. Sheppard, the brothers Johnson and Steve Paine all worked thru traffic and once clear of the field all set sail for the high flying Coffey, but only Super Matt was able to get within a few car lengths of the Sweeteners Plus sponsored machine of Coffey and when the checkered flag waved Coffey had found himself in victory lane for the very first time at Outlaw Speedway in his young career. Sheppard had to settle for second and with that strengthened his top point position as the two men chasing him in the championship hunt, Steve Paine and Alan Johnson finished third and fourth. Jim LaRock continues to show solid and consistent runs while competing with the top echelon in the sport as he rounded out the top five.

The Sunrise Insulation American Racer Tire Sportsman Division saw a first time feature winner in 2019 as second generation driver, Brett Buono took the early lead, with stood a barrage of caution flags and relentless pressure from Tommy Collins Jr., hit his marks to perfection and picked up the popular win. An early event incident on the front stretch found current high point man Jimmy Zacharias involved and hauled off on the hook with unrepairable damage thus ending his night. Also involved were other top point getters in Chris Fisher and Will Shields who were both able to continue. But on this night it was clearly a two horse race as Buono and Collins drove away from the rest of the field and with Collins trying numerous times to get a run on Buono on the bottom of the speedway. However, Buono was up to the challenge and brought his mount home for the win. Collins settled for second at the end followed across the line by Billy Paine in what was perhaps his best feature run of the season with Chris Fisher recovering to nail down fourth while other top point finisher, Brian Fish rounded the top five.

The long night of action continued as the DIRTcar Hoosier Tire Sportsman were on the track and like the American Racer Sportsman Division before them, this class too saw a new first time winner in 2019 as Brandon Butler was able to hold off a stellar field of competitors to get the win. Butler and Alex Payne brought the field to the opening green flag and it was evident right from the start that Butler had a good set up under him as he stayed out front throughout and picked up the victory. For the second time in as many races, Andrew Smith had another great run coming from the third starting row to finish second while he was chased thru the field throughout the entire distance by two time feature winner, Steve Gray who wound up third. Lady racer, Nichole Hoag was again picture perfect in her run finishing fourth at the end while Alex Payne drifted back a bit from his front row starting spot and rounded out the top five. None the less another good run for the third generation driver.
DIRTcar Hoosier Tire heat wins were claimed by Smith and Will Shields.

Shields, Stacy Jackson and Bryan Rhodes all did double duty in competing in both Sportsman Divisions.

In the Stan’s No Tubes Classy Street Stock Division, Dylan Cecce had yet another brilliant night in route to feature win number 8 and four out of the last seven. However, it did not come easy by any means as local favorite, Quinn Sutherland definitely had the fastest car throughout, but two late race caution flags ruined a comfortable lead that he had with the final caution coming with only a couple laps remaining and with that being the undoing of Sutherland’s perfect night. On the last restart Cecce was able to get a wheel under Sutherland as the two raced side by side down the back straight and into turns three and four. Cecce got a better bite coming for the checkers and was first back to the line. That and with a very uncharastically poor night by Glen Whritenour, Cecce now has a solid point advantage heading into Championship Night next Friday. But, don’t count Whritenour out just yet as the two time and defending SS Track Champion will not go down without a fight as the two have completely dominated the class throughout the entire 2019 season. A very disappointed Quinn Sutherland had to settle for second at the finish while CJ Guererri came home for third after an early event trip to the pits for a flat tire. Other class heavy weights Jake Karlnoski and Chuck Winslow rounded out the top five finishers.

The Marion Decker Insurance IMCA Modifieds found a brand new face in victory lane as Jared Spaulding paved the way in route to his first of 2019 and by picking up his earlier evening heat win made it a perfect night. Spaulding and Rich Karlnoski brought the fourteen car field to the opening green and it was apparent right from lap one that Spaulding had the horses to keep everyone at bay. Try as he night, 2018 Track Champ, Rodney Morgan just could not find enough speed and had to settle for second place at the double checkered flags as he was followed across the line by Bad Brad Smith, 4 time feature winner in 2019, Brandon Smith as Ol’ Dick in the Dirt Karlnoski rounded the top five.

In the made up Marion Decker Insurance IMCA Modified feature rained out earlier in the season, Brandon Smith used the Mighty Mopar power between the rails to dominate the action as he picked up season win number four. He was followed across the finish line by Rodney Morgan, Brad Smith, ageless veteran driver, Sparky Hills as Bruce Tinsley rounded the top five.

The Mighty 4 Cylinder Division ran a pair of feature events with a make-up feature going off early in the program. Veteran driver, Ray Hyer was able to hold off current high point man, Adam Austin to pick up the win and as he took the checkered flag the power plant in Hyer’s machine went up in smoke making the win even more memorable. 7 time feature winner in “19” Adam Austin settled for second to stretch his point lead as he was chased across the line by 4 time feature winner Scott Lehman Jr. as the two continue to dominate the class. Lady driver, Erica Bell put on a great drive to finish fourth as 2017 Track Champ, Mike Stone finished fifth.

In the regular feature everyone knew it was just a matter of time before Jeremy Bunn would hit pay dirt as he has been a picture of consistency over the past few months. Bunn took full advantage of his outside pole position starting spot, took command at the opening green and cruised to claim his first feature win of the season. Adam Austin, who started in the fourth row charged thru the field, but Bunn was not be denied as Austin, Scott Lehman Jr. and Erica Bell all mirrored their make- up feature finishing positions by claiming second, third and fourth. Scott Lehman rounded out the top five finishers.
4 Cylinder heat wins went to Lehman, Lehman and Bunn.

Last but certainly not least the Marion Decker Insurance Hobby Stocks once again thrilled the fans with their side by side competition. Kenny Hunt and Jason Clugstone brought the seventeen car field to the drop of the green, but it was Justin Eldredge getting out front from his second row start spot and going on to the win. With the win, Justin Eldredge becomes the seventh different feature winner in the Decker Insurance Hobby Stock Class in 2019 proving again the close, intense competition in this upstart, low cost division. Eldredge was chased across the line by Bruce Kinner who had to settle for second with last year’s Track Champ and two time feature winner in 2019, Marc Minutolo finishing third. Five time feature winner Wayne Ellison claimed fourth at the finish with Jamie Eldredge Jr. rounding the top five finishers.
Marion Decker Insurance Hobby Stock heat wins were claimed by Kenny Hunt and Wayne Ellison.

When the night was done nine, yes (9) features including the two make-ups were put into the record books with 2 more make-up features and 7 more regular Double Point features on the card for next Friday, August 30, 2019 which will determine the 2019 Outlaw Speedway Track Champions.

A complete list of the current point standings can be found at www.outlawspeedwayllc.com.

Follow along at www.Facebook.com/OutlawSpeedwayLLC/ for continual updates leading up to next week’s regular season finale. Then, after a three week break the fall “specials only” format will kick in with the Fall Nationals set for September 20 and 21 featuring the return of the World of Outlaw Late Model Touring Series. Outlaw Speedway will then take another month break before returning on October 18 and 19 for the Annual Dutch Hoag Memorial Triple 7’s weekend.