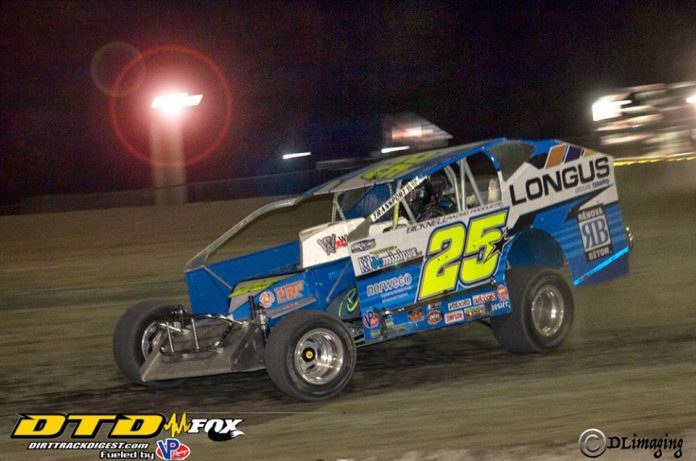 Dany Gagne took the early lead in the Egglefield Brothers Ford 358 modified feature event, while Bernier would quickly move into the 2nd spot.

Gagne held him off for ten laps before relinquishing the top spot to Bernier.

Mike Mahaney slid into the runner up position late in the event, but was no match for the driver from St. Hyacinth, Quebec.

Chris Frennier and Derrick McGrew Jr. led the 30 lap Poirer’s True Value Sportsman feature event to the green flag, but it wouldn’t be long before Adam Pierson took advantage of an up front starting spot to take the lead.

While Pierson held the top spot, Jamy Begor was looking to go back to back in sportsman competition, working his way into second.

Begor and Pierson battled side by side of a restart for a number of laps before the Mooers, NY campaigner would take the top spot for good, winning his third feature in the month of August.

Zach Daniels would take advantage of misfortune from a number of drivers, to win his third Ernie’s Discount Tools Super Stock race of the season.

Michael Wright came from the back three times during the event to finish second, Tyler Irwin finished third, Garrett Given fourth, and Joe Daniels fifth.

The Dirt Modified Nostalgia Tour made their second stop of the 2019 season.

The Chris Frennier Motorsports Strictly Stocks were suspended after lap 1, following a trail of fluid being dropped on the track, making it unsafe for drivers.

The race will be the first event on the card on Saturday August 31st.