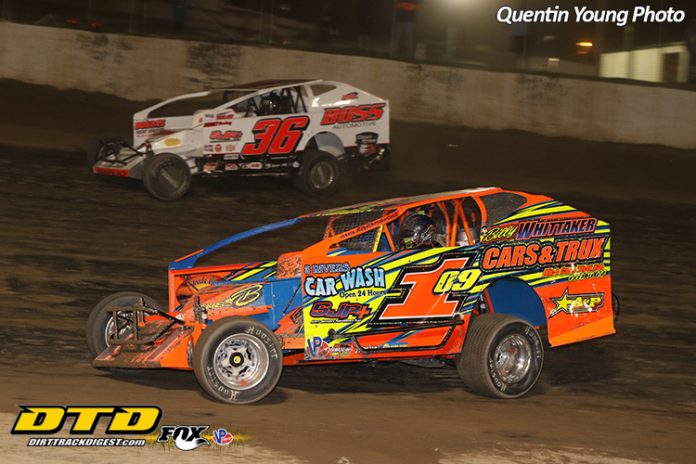 FULTON, NY – Billy Whittaker came out victorious after a crazy battle with Tom Sears Jr., a fight that lasted over half the race for the Fulton Speedway victory.

Tom Sears Jr. took advantage of a front row starting spot to jump out to a big lead at the start of the 35-lap Modified main, with Billy Whittaker slotting into second. Sears had a fast car early on, opening up nearly a straightaway lead in the first five laps, working the top while Whittaker in second ran low. Two big movers early included Larry Wight, who climbed from twelfth to fifth by lap eight, and sixteenth starter Tim Sears Jr., who was right on Wight’s tail.

As leader Sears closed in on traffic, his lead stabilized at around three seconds. Far behind second place Whittaker, Wight moved into third, with Tim Sears continuing to follow in his tracks. However, the elder Sears’ comfortable lead was wiped out, as the caution waived on lap 15 for a spinning Collin Dubois.

Right off the restart, Whittaker made it known he wanted the lead. With Sears high and Whittaker low, the pair battled door-to-door incessantly. Whittaker was scored the leader on lap 22, but Sears took it back the next time by. Sears held on to the lead officially at the finish line for the short term, but Whittaker remained glued to his side. On lap 30, Whittaker nosed out in front once more, but Sears grabbed it back on lap 31. The next lap, Whittaker retook the lead once more. Meanwhile, Wight was right on the tail of both cars, but didn’t have a lane by with the leaders side-by-side for half the race consecutively.


On lap 33, Whittaker cleared Sears, the first time the lead had been a full carlength since the restart. Sears took one last stab at the win with a hard drive on the last lap, but came up just short, as Billy Whittaker scored the popular win in a wild race. Tom Sears Jr. claimed second, with Larry Wight, Tim Sears Jr., and Ronnie Davis the top five.

“I can’t breathe,” Whittaker said. “It was a heck of a night, we had to change a lot between the heat and the feature and we weren’t sure what we had, but it was good. When that win got away from me a couple weeks ago, I didn’t know if I’d get the chance again, and hats off to Tommy Sears, we had a heck of a race for the lead.”