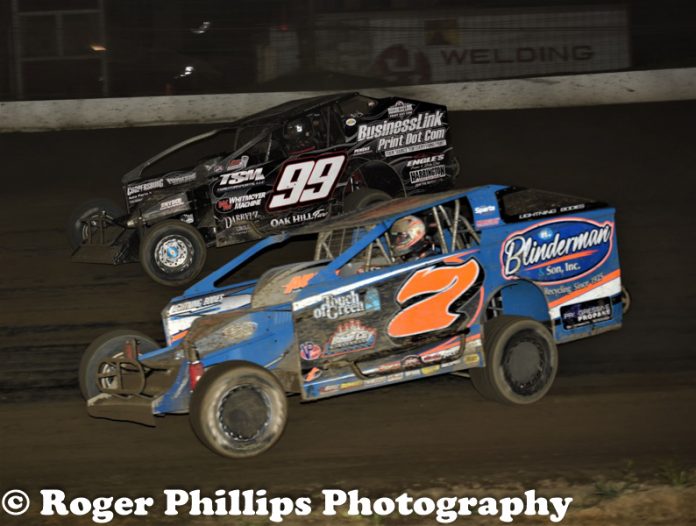 Rick “Scooby” Laubach became a weekly competitor in the 2019 TP Trailers NASCAR 358 Modified season on a regular Saturday night basis at Grandview Speedway after only running the beginning of the season events other times. He was actually the point leader in the early stages of the year until hampered by motor and other mechanical issues as he struggled some weeks to even qualify and would actually run another competitors car just to be able to make the feature.

This Saturday “The Quaker Shaker” had a better engine ready for action and it paid off.

Following a torrid battle with John Willman, Laubach piloted the Gary Hermann-owned Blinderman sponsored 358 Modified into the lead on the 24th lap of the 30-lap Modified feature, coming from 12th starting spot, and went on to chalk up his first career Saturday night feature victory.

Rookie Parker Guldin made a clean sweep of the TP Truck Equipment Sportsman activities. First he won his qualifying event and topped the night off with his second 25-lap feature victory. Once again he picked up an extra $100 for being the highest finishing crate engine powered Sportsman.


In the 20-lap Blast From The Past feature, Brett Peters won the Modified portion while Wes Cassel was the winner in the Vintage class.

Providing the feature winners met the necessary requirements, they received monetary awards from T.P. Trailers and a certificate from VP Fuels for product awards. The Dan’s Deli ½-way hoagie award recipients were Willman and Guldin

Another tripleheader show of action packed stock car racing is set for next Saturday, August 31, with a 7:30 p.m. starting time. Included in the excitement will be the T.P.Trailers NASCAR 358 Modifieds, T.P.Truck Equipment Sportsman and a first time visit of the XCEL 600 Modifieds. Adults pay $15 while youngsters under 12 are admitted free.

John Willman led the Modified feature for one lap before Richie Hitzler, a rookie, merged into first.

A homestretch tangle on the 11th lap between Justin Grim and Glenn Strunk regrouped the field as the yellow came out. The restart was void following a chain reaction tangle in the fourth turn. Hitzler continued to show the way when action resumed, but now second through fifth was comprised of Willman, Swinehart, Laubach and Cozze.

Willman was back in the top spot by the 14th lap and three laps later Laubach was in pursuit.

A three-way battle for third between Swinehart, Duane Howard and Cozze ensued ahead of Willman and Laubach.

In no time Laubach, in the Teo chassis mount, reeled in Willman and passed him for the lead on the 24th circuit.

Ryan Grim and Briggs Danner set up a one-lap shoot out to the checkered when they tangled in the second turn. Laubach wasted no time pulling away when the race went green again as he was determined to be in the winner’s circle at the conclusion. That’s exactly where he was earning a well-deserved triumph trailed by Willman, for the second week in a row; Howard, current point leader and last week’s feature winner came from 14th starting spot to gain fourth followed by Craig Von Dohren.

At the drop of the green in the Sportsman feature Guldin was the early pacesetter. Behind him were Kenny Bock, Jesse Landis, Mike Mammana and Brad Brightbill, who was on a mission and came through the pack on the outside from the 14th starting spot to round out the top five.

Mammana inherited second on the sixth lap when Landis dropped out of competition allowing him to challenge Guldin.

Steve Young brought out the first yellow when he slowed coming off the fourth turn. Guldin held his own on the restart, but it was Brightbill making his presence known pullup a bit. Miller continued to show the way on the restart with pressure now coming from Chris Esposito, Bock, and Brightbill putting the pressure on.

The yellow was thrown again after a fourth turn multi-car tangle with 19 laps completed. The restart was thwarted when several cars made contact in turn one. Before the restart, Brightbill, running a solid second, pitted with a left rear flat tire. He did rejoin the race, but could only get back up to ninth. On the restart Guldin kept Mammana, Brad Arnold, Brian Hirthler and Ryan Beltz in tow.

The front running order never changed in the final laps as Guldin was triumphant again chased across by Mammana, Arnold and Beltz.

Young, Guldin and Mammana won the heats. The consi went to Mark Kemmerer.

Jeff Paulson led the Blast From the Past feature for seven laps before Andy Cassel moved in front on the eighth lap restart brought out when runner-up at the time Todd Lapp spun in the third turn.

In a few laps the front runners encountered lapped traffic and Brett Peters was closing in on Cassel very quickly. Peters took advantage of the situation to take over the lead on the 19th lap.

Peters never looked back and went on to take the win chased across the line by A. Cassel, Paulson, W. Cassel and Mike Garris Sr.

Lap sponsorships and heat race sponsorships for the September 21st Freedom 76 are available $20 for laps and $200 for a heat race. Check in with Tina Rogers or Tommy Kramer at the track. Telephone Ernie Saxton at 267.934.7286 for complete information.