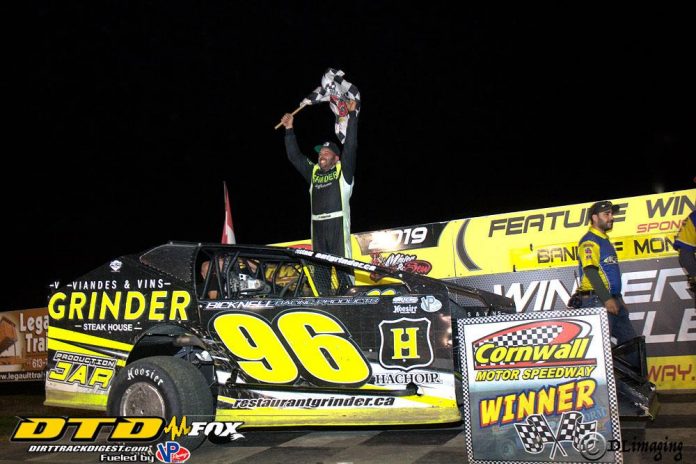 CORNWALL, ONT – Bank of Montreal presented a busy night of racing with the Lightning Sprints and Vintage Super Series along with Modifieds, Sportsman and Pro-Stock.

Gabriel Cyr took the lead in the 25-lap Next Level Home Improvement with Adam Rozon and Shane Pecore behind him, Rozon went a little too high and lost some ground with Pecore moving to second. Devin Willis brought the caution on lap 10. On the restart, Shane Pecore took the lead over Cyr and Brianna Ladouceur in third. Ladouceur had a solid car and took second on Cyr with 16 laps in the books. Ladouceur used the inside lane and got closer to Pecore. Ladouceur took the lead with 5 laps to go and pulled away from the field and crossed the checkered flag first over Pecore and Cyr.

Dave Seguin was the early leader in the 20-lap Alexandria Home Hardware Pro-Stock over CD Beauchamp and Stephane Lebrun. Point’s leader coming in tonight, Lebrun passed Beauchamp for second and got closer to Seguin by lap 7. Lebrun used the high side and took the lead on lap 9 as Beauchamp was following closely in third. Beauchamp started to challenge the leaders as he passed Seguin and then passed Lebrun for the lead with 5 laps to go. Beauchamp led the last portion and took his 4th win of the year.

Yves Girard took the lead in the 417 Bus Line Lightning Sprints Series as caution came out on lap with Terry Ladouceur stopping in turn 4. Girard to the lead with Tommy Moreau and Eric Mireault behind him. Girard got closer to lap traffic by halfway point as the top 3 got away of the rest for the field. Both Moreau and Mireault exchanged the second spot. Caution came on Guillaume Ouellette with 6 laps to go. On the restart, Tommy Moreau’s engine exploded and red came out. Jordan Poirier to the lead and he led the final laps and got the win. Pascal Levesque was crowned the 417 Bus Line Series champion.


The Vintage Super Series had 2 different features, the first feature saw Kenny Polite taking the lead over Josh Powers and Bob Johnson, the feature went quickly to halfway point as Wayne Riddell moved to third. While running in third, Riddell lost track in the backstretch and lost is strong third. Polite was strong and dominated the event to capture the win.

In the second feature, Megan Ciglich took the lead over Tim Charland and Tim McColeman in third. Just like the first feature, halfway point came quickly with no changes in the top 4 drivers. Lap cars became a factor in the final as Charland got closer to Ciglich but she managed to stay in front and won the event.

Next Sunday will be championship night at the Speedway with the final round of the Fat Les Chip Stand Canadian Nationals with a 125-lap feature paying $5,000 to win along with a full program in all other divisions including a extended 25-lap feature for the Mini-Stocks.