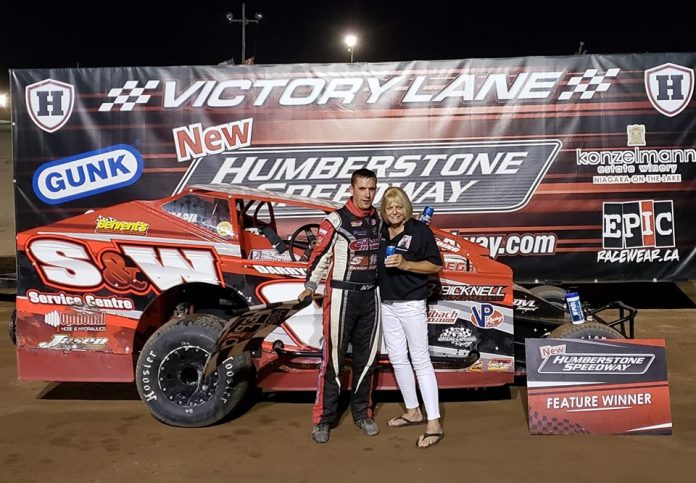 Tyler Willard and Mike Bowman shared the front row for the 5th annual Pete Cosco Memorial 75 for the Modifieds with Bowman taking the lead. Mat Williamson would take over second off an early race restart and would go after Bowman for the lead. Williamson would take the lead away on lap 12 and would check out on the field. Chad Brachmann would move into third and would challenge Bowman for second. Two-time sportsman divisional champion Gary Lindberg would race inside the top five as was Matt Farnham.

Farnham moved into third on lap 48, as Bowman and Williamson would pull away. Gary Lindberg’s run in th top five would end, setting up a green/white/checkered finish. Williamson would go on to score his second straight Pete Cosco Memorial. Bowman, Farnham, Todd Gordon, and Chad Brachmann would complete the top five.

Brad Rouse and Chad Chevalier would bring the Race of Champions 602 Dirt Sportsman Modified Series presented by Product 9 with Rouse taking the lead. On a lap six restart, Greg Panunte would take the lead away from Rouse. With Panunte in the lead and Rouse giving chase, Cody McPherson was moving up through the field. McPherson would enter the top three and would get around Rouse to take over second. Then late in the event, McPherson would take the lead late from Panunte. McPherson would lead the remaining distance to score the win, his second of the season at New Humberstone. With his third place finish, Rouse would secure the 2019 ROC 602 Dirt Sportsman Modified Series Championship.

Jeff Dayman and Adam Ferri were on the front row for the Pro Fabrication RUSH Late Models with Ferri showing the way. After a lap six caution, Ferri and Dayman would pull away with Chad Homan racing in third. Homan would take second away on lap eight and would go after race leader Dayman. Chad Homan would take the lead away from Dayman on lap 11. Homan would pull away from Pietz and would appear to pull away to score the win and he lost the handle on his own with two laps remaining after a lap car spun in front of the leader. Pietz would go on to score the win.

Ken Sargent would lead from the drop of the green in the JC Auto Thunderstocks feature. Sargent would lead for most of the distance and was being pressured by Billy Bleich Jr and Dave Bailey. Bleich would take the lead away from Sargent on lap 14 and would pull away to score his fourth win of the season.

Vincent Pagnotta and Jay Moulton were on the front row for the Glo & Go Tanning Mini Stocks feature with Moulton showing the way. Craig Vlasic would take second away on lap three with Jeremy Cooper racing in third. Cooper would take second away from Vlasic prior to the halfway mark and would go after race leader Moulton. Trevor Want spun on the back straightaway to bring out the races first caution on lap 10. Cooper would take the lead late and would go on to score the win, his first at Humberstone.

Danny Wurster and Dylan Llord were on the front row for the Airhardt Delivery Pro 4 Trucks feature event with Llord jumping to the lead. Mitch Dumont would take second away and with Llord would pull away from the field. Dumont would take the lead away from Llord on lap eight, as Llord went off the backside of the track. Dumont would go on to score the win, his fourth of the season.

NEWS AND NOTES: 96 cars signed in pitside for the racing program. Flags were at half staff in memory and honor of Bob Pietz, who passed away earlier in the week.

The road to the track championships will come to a close next Sunday, September 1 as Rankin Construction presents Season Championship night. A full Epic Racewear Weekly Racing Series program of Sportsman, Late Models, Thunderstocks, Mini Stocks, and Pro 4 Trucks will complete the program. Labor Day weekend fireworks will light up the sky after the completion of the racing card. Gates will swing open at 4pm and showtime is at 6:30pm. All kids in attendance can check out the activities with the Humbee’s Kids Club presented by the Port Colborne Dairy Queen happening at 5:00 pm each race night.

Did Not Start: Ryan Susice

Did Not Start: Dave Stolzenberg Jr