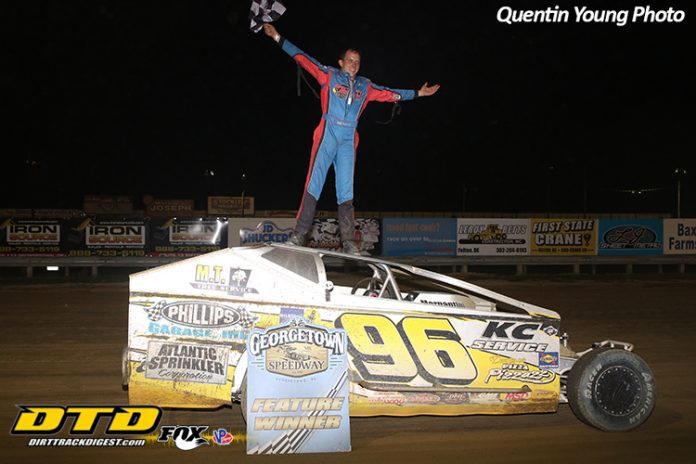 2019 has been a year of heartbreak for Rick Holsten, who is the car owner of the No. 96 dirt Modified driven by Billy Pauch Jr. Earlier this year Holsten’s father passed away and less than three weeks ago Rick and his wife Megan tragically lost their son Cory to injuries as the result of a motorcycle accident. No one would have thought anything of it if Holsten decided to step back and not race anymore in 2019. But Holsten, who is a former driver himself, did what most racers do when times get tough, that is to carry on and press forward looking to honor those they have lost.

The Holsten No. 96 team instead bonded even closer than what they were before looking to honor the memories of his dad and son. After a couple of rough outings the past few weeks, that determination has started to show. Pauch Jr., and the Holsten had high hopes last Tuesday night when the STSS visited New Egypt Speedway to take part in the postponed “Dirty Jersey 6”. Unfortunately, a bad break ended their feature race early leaving the team disappointed, but they knew they had a fast car and would rebound.

Last Saturday night at New Egypt, the team put it altogether and won the 30-lap feature race to solidify Pauch’s status as the track’s point leader as he closes in on his second New Egypt track title, but there was another goal the team had on their list. They wanted to win a STSS race away from their home track of New Egypt. The Pauch/Holsten team previously had won a STSS race back in June of 2016 at New Egypt, but had been shutout since that time.

Tuesday night, August 27, 2019 turned out to be a night that the team will always remember. Not only did they win the 35-lap STSS “Beach at the Blast” in dominating fashion, but they way they won it will be the point that will always stick in their minds and their fans. If you follow dirt Modifieds at all in the Northeast, you know who Matt Sheppard is and what he has accomplished so far in his career. Sheppard is the gold standard of dirt Modified racing right now and the driver everyone is chasing. Obviously, Sheppard does not win every race, but when he does have the lead in a race it is a rare occasion that he gets passed especially in the STSS South region where he has been the dominant force.

Billy Pauch Jr., passed Sheppard for the lead last night on lap 13.  After he made the pass, Pauch pulled away and dominated the remainder of the race to take home the big win for car owner Holsten and the entire team. It was an emotional scene in victory lane and that vibe continued afterwards at the team’s trailer as Holsten talked about what the win meant to him and about his driver.

“This was a good win tonight and that was for my son Cory,” cited a happy Holsten. “I can’t say enough about Billy tonight.  Passing Matt Sheppard for the lead is a feat in itself right now. Matt is really on the top of his game and Billy seems to be coming in on his own right now. I’m just really happy right now. We got a STSS win about four years ago at New Egypt, but we really wanted to get one at another track.  Tonight I didn’t really think we were gonna get it. I thought when Matt got out front, we really didn’t have the car to get it, but dam if he didn’t prove me wrong. Billy really wheeled it tonight, and we got the win. I couldn’t be anymore prouder of Billy or the team.”

For Pauch Jr., it was not only a big race win for himself, but after a couple of weeks of really horrible racing luck which had the confidence of the Frenchtown, N.J., driver as low as it’s been for a long time.  It was the boost he needed. That boost started with the win last Saturday at New Egypt.  After last night’s win I think it’s safe to say Pauch’s confidence has rebounded nicely.

“You know how I always say this racing deal is like a roller coaster and it’s really been low lately, but you told me not to worry and it will go back up and tonight we took a big step to go back up,” Pauch Jr., cited as his dad, the legendary Billy Pauch came over to congratulate his son and give him a hug. “Like I said we’ve down the past couple of weeks but not out. We’ve been working really hard to get back up and regain that confidence and tonight it all worked out for us.”

Talking to drivers like I often do, they always talk about how confidence in themselves can play a big role in having a good outcome and you can’t get much more confident after passing Sheppard for the lead in a race.

“I didn’t know what to do with Sheppard there,” as Pauch explained his winning move. “I knew I was getting better than him and could run the bottom early on and he couldn’t so I knew I had to slide him there going into turn three and four and once I cleared him I was able to move back up and drive away. He seemed to get tighter the longer it went, and I seemed to get better. I kept hitting my marks and finally I hit it perfect and was able to pull alongside of him and I knew I had to get him then or it might be over.”

“Like I said before, he is the one we all put ourselves up against because he is the best. This track was definitely more my style of racing tonight than his style, but I’ll take it for that but still it’s an awesome win.”

It was a big win for Pauch himself, but Billy recognized the fact that it was even a bigger win for his car owner.

“It’s been a rough year for Rick, he lost his dad and his son but he keeps moving on and two days after the accident we had eight guys all show up at shop and we worked our asses off on these cars to keep it going for Rick. We have one more big goal to accomplish this year coming up in three or four weeks at New Egypt and that is to win the championship and now we have the confidence to get that done. I don’t know if this is my biggest win ever, but it’s definitely one my coolest wins and to win a race of this magnitude for Rick is a great feeling.”

My last question to Pauch was. What’s it feel like to take the lead away from Sheppard and walkaway to win the race?

“Man, that’s a pretty good feeling. I don’t think many people have done it this year unless he missed but man it feels good.”