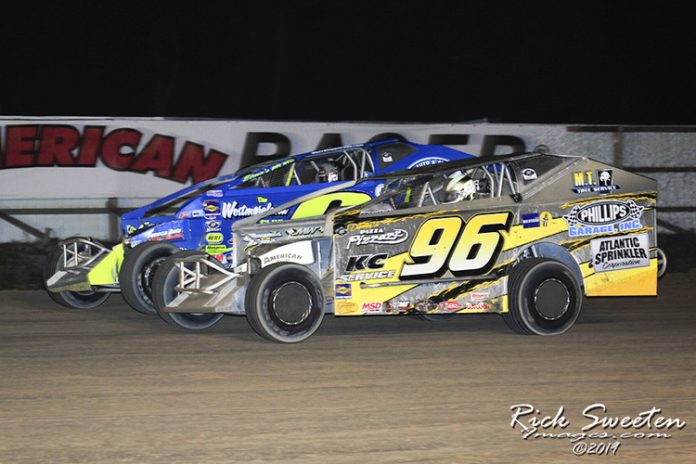 With the MAV-TV cameras shining and a fantastic crowd on hand, Milford, N.J.’s, Pauch Jr. won the sixth edition of the VAHLCO Wheels ‘Blast at the Beach’ presented by Melon 1 at Georgetown Speedway.

Racing has a funny way of working itself out sometimes.

Pauch Jr. was asked which of the eight STSS Velocita-USA South Region presented by Design for Vision and Sunglass Central events he thought he would win when the 2019 season began.

“New Egypt (N.J.) Speedway for sure,” he said. “But I screwed that up. It feels good to come back tonight with this field and win one, especially racing with Matt (Sheppard).”

Andy Bachetti and ‘Super Matt’ Sheppard made up the front row after earning their starting berths in the 5-lap Jones Racing Products What Drives You® Dash.

Sheppard would use the outside to his advantage, grabbing the quick lead and Pauch Jr., launched off the second row to gain the runner-up position.

Lap three would begin a yellow-flag-filled sequence of laps including a seven-car pileup that included the likes of Jimmy Horton, Brandon Grosso, Richie Pratt Jr., and Joseph Watson, among others.

The field finally got to racing after a lap-six restart. Sheppard and Billy Jr. would pull away from the field, Sheppard utilizing the top side, with Pauch Jr. glued to the bottom.

On lap 13, ‘The Kid’s Kid’ did something very few drivers have been able to do in 2019. Pauch Jr. drove to the bottom just as ‘Super Matt’ picked up a push through the middle of turns one and two.

That was all Pauch Jr needed. He took the lead into turns three and four and never look back.

Following a lap-15 restart, the last 20 laps went caution-free, and the lead trio – including third-running Bachetti – pulled away.

With eight laps to go, it appeared as though Sheppard was starting to reel in Pauch Jr. However, slower traffic played into Pauch Jr.’s hands.

Sheppard, of Savannah, N.Y., maintained his South Region championship lead with a runner-up finish in the Hurlock Auto & Speed No. 9s. Bachetti’s long ride south from Sheffield, Mass., was rewarded with a third-place finish. Billy Pauch Sr. of Frenchtown, N.J., completed a successful night for the Pauch family in fourth and David Van Horn Jr. of Ringoes, N.J., completed the front five.

Bachetti earned $500 as the winner of the 5-lap Jones Racing Products® ‘What Drives You’ Modified Dash over Sheppard.

The majority of the nightcap event was paced by Jim Housworth, who entered the night as the Crate 602 Sportsman South Region point leader.

Sherby caught Housworth on the 16th lap. One tour of the half-mile oval later, he worked to the inside and paced the remaining three laps of the event.

Housworth was a disappointed runner-up, with teenager Justin Grosso earning a career-best STSS finish in third, ahead of Joe Toth and another talented young driver in Cole Stangle.

BEACH BITS: On a cool summer night, a huge crowd took in the sixth edition of the ‘Blast at the Beach’ co-promotion involving driver Eric Kormann and BD Motorsports Media LLC. The pit area was bustling with 35 STSS Modifieds, 33 STSS Crate 602 Sportsman, 15 Delaware Super Trucks and 13 Delmarva Chargers for a total of 96 cars….

With cloudy conditions and MAV-TV cameras on hand, a heavier-than-usual track surface was in place for the event….

2018 winner Anthony Perrego was done for the night in heat-race competition after mechanical issues with the Gary Simpson No. 12K….

Did Not Start: Mike Hough