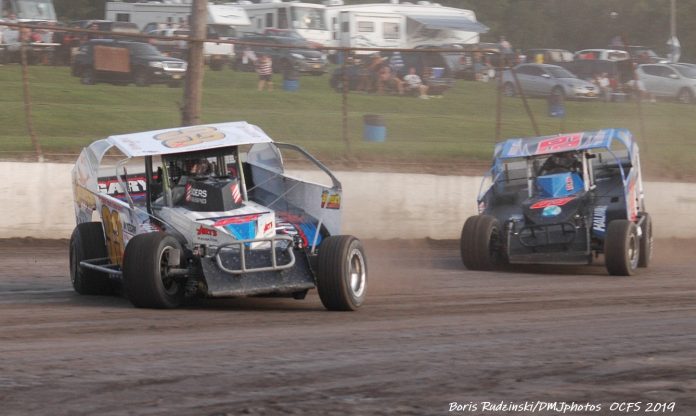 MIDDLETOWN, NY – The five-eighths-mile Orange County Fair Speedway will be silent this coming Saturday, August 31, giving competitors an extra week to prepare for the weekly season finale. The point season for all competing racing divisions will end with Championship Night, Saturday, September 7, when track champions will be crowned.

With the most lucrative weekly competition point fund in Modified racing, Orange County’s drivers and their teams will be going all out to score as many points as possible during the final race of the weekly season. In addition to the trophies and other awards, the champions in each division will find their racing bank account greatly enhanced. The Big-Block Modified titlist will cash a check for $40,000, while the companion Small-Block champ will take home $15,000, the Sportsman top dog will net $5,000, and the Street Stock champion will be $2,500 richer.

All four divisions will see action in qualifying time trials, heats and feature races on Championship Night. In addition, the winner of the 30-lap headline feature race will earn a guaranteed starting spot in the annual Eastern States 200, this year Sunday, October 27.

Admission prices for the September 7 race meet remains at $20 adults and $5 for children under ten. There is a $1.00 car charge for the Drive-In section. The full nights of racing begin promptly at 6:00 pm. Fans will receive a free program upon entrance to the Speedway.

Advance ticket sales for the September 14 Eve of Destruction and track information are available at the Orange County website, www.orangecountyfairspeedway.net, or from the Track Office. Call 845-342-2573 during business hours.

Attention Media Members: Requests for Eastern States Weekend (October 25-27) credentials must be made by October 14. Send requests to barmbr6493@aol.com. Requests for Hard Clay Final (October 24) credentials should be sent to bdmotorsportsmedia@gmail.com.