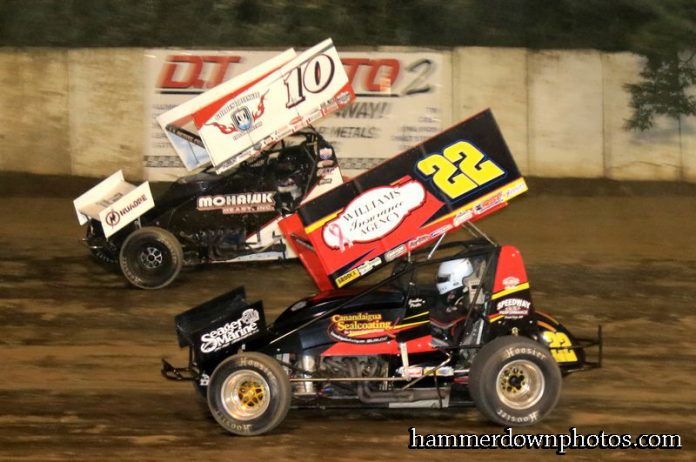 BREWERTON, NY – Jonathan Preston broke out the broom on Friday night at the Brewerton Speedway.

“I don’t know what to say,” stated Preston after winning the second feature. “This car is on rails. The track is beautiful. It was my night. This is my little engine, my older car, but it seems to be old faithful.”

Preston started on the outside of the front row for the first 25-lap feature event. Preston won the race off of turn four at the green with Billy VanInwegen falling in line quickly behind him.


Preston had the lead on lap two when Kyle Moffitt flipped in turn one. Moffitt went end over end bringing out the red flag. Thankfully he was okay after the crash.

The ensuing double-file restart gave VanInwegen a shot at Preston again, but like the initial start, it was Preston powering out in front. He got to the cushion and pulled away as VanInwegen searched for something more. Eventually he also made his way to the top of the speedway.

Another red came on lap 12 just as Preston had caught traffic. Denny Peebles hit the wall and came to a stop on the frontstretch. Flames erupted from his car. They were extinguished quickly with Peebles walking away uninjured in the incident.

One last double-file restart put Preston and VanInwegen side-by-side again. Preston maintained his perfection on restarts keeping everyone under control at the green.

Preston’s second foray into traffic came on lap 18. This time the traffic was a struggle for Preston. Several were running the same lane as him on the top-side of the speedway. Preston tried to battle his way through, but he was slowed enough that VanInwegen got to his bumper.

The final three laps of the race were a dogfight in traffic between Preston and VanInwegen. VanInwegen tried and tried to make the bottom lane go. It just didn’t have enough grip. He pulled even off of turn two on the final lap. Preston went to the top in turns three and four. The momentum gained was enough to propel him to the win.

“They were top and bottom,” mentioned Preston of traffic. “I was faster on the top. I sailed it in there a couple times, but it’s so hard to get a run.”

VanInwegen came up a half a car-length short of claiming victory. It was his best run at the Brewerton Speedway to date as he had to settle for second.

“I hate to give one way from the pole like that, but man he was dominant,” cited VanInwegen. “I got the wing back under that last caution. We got to him in lapped traffic. I gave him everything I had. I just couldn’t stick the bottom enough to pull it off.”

Danny Varin overcame several challenges to get a podium effort. Varin not only battled handling problems, he was also in a fight for much of the race with Jason Barney, Larry Wight and Davie Franek. He outlasted all of them to get third.

“The podiums are nice,” said Varin. “They pay the bills and keep us going. The car was no good tonight. We got some work to do. We’ve been working on it. We’ve been trying to figure something out, but right now I can’t stand this race car.”

In the second 25-lap A-Main Jeff Cook jumped out to the lead on Sammy Reakes IV from his outside pole starting spot. On lap two the pair were joined by Paulie Colagiovanni with a three-wide battle for the lead developing. They remained together several laps before Cook maintained the edge.

Josh Pieniazek slowed on lap five to bring out the yellow. When action resumed another yellow was necessary as Barney clipped a tire on the bottom of the track sending him up the race track into Shawn Donath. They both got into the outside wall off of turn four. Tommy Wickham was also involved.

Cook benefitted from the single-file restart to keep the lead of the race. While he was motoring out in front, Preston was making his way to the forward after starting sixth. On lap 11 he broke into the top three, a lap later he was running second behind Cook.

Preston stalked Cook for three laps before finally making his move. Preston went low in turns one and two to pull even with Cook off the corner as they raced onto the backstretch. He completed the pass through turns three and four to take the lead on lap 15 after the pair exchanged slide-jobs.

“That was a riot,” stated Preston about the battle with Cook. “I wouldn’t want to race against anyone else. They are all great guys, Cook and them. I kind of feel bad, I know it’s been a while for him, but what are you going to do.”

Preston opened up the advantage on the field from this point. Cook had another challenger emerge in Matt Tanner. Tanner, who started 11th, found some moisture off the extreme bottom of turns one and two allowing him to go by Cook for second on lap 17.

Tanner searched over the final eight laps looking for something to get to Preston to no avail. At the checkered flag it was Preston claiming the clean sweep of the night.

After not finishing in the top five in the first main, Tanner was pleased with his efforts in the second race as he finished in second. He also made up ground on those in front of him in the point standings.

“At the beginning everyone moved up immediately based on the first race,” mentioned Tanner. “That left the bottom open. It started to wear out late. You had to get up there in the middle to make speed and that’s where Jonathan was. Those guys had a hell of a night. I guess it’s not too bad finishing second to the guy that won two in one night.”

Cook was disappointed with his third-place finish. The team is getting closer and closer to getting that first win of 2019.

“It’s not where we wanted to be,” commented Cook. “I was hoping we were going to close this thing out. She started getting loose in the end. The top was just too far out. I already had the wing in the trunk so there wasn’t much I could do. I was just a sitting duck on the top.”

Hebing finished in the fourth spot with Pieniazek rallying from his early race troubles to complete the top five.