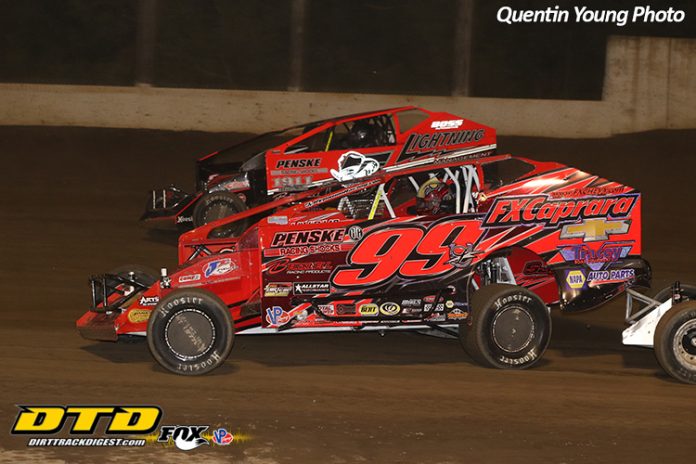 BREWERTON, NY – Larry Wight doubled down at Brewerton on Friday night, grabbing the 35-lap Modified feature win and the track championship at the same time.

Larry Wight started sixth, but did not stay there for long, jumping to second on the first lap and getting by Roy Bresnahan for the lead on lap three. Tom Sears Jr. wasn’t far behind, following in Wight’s tire tracks to claw up to second. Entering the night, Tim Sears Jr. had a 14-point lead over Wight for the track championship, and while Wight was leading, Tim Sears was stuck outside the top ten in the early stages.

To clinch the title, Tim Sears just needed to keep Wight within shouting distance. However, Sears’ 83x stopped with ignition problems on lap 10 and fell out of the event. This forced a yellow, and the top two of Wight and Tom Sears remained status quo on the restart, while Jimmy Phelps and Billy Decker got up to third and fourth by halfway.

Up until about lap 20, Sears had hung pretty close to Wight, but at this point Wight started to slowly pull away. Meanwhile, Phelps was now closing in on Sears for second, dragging Decker with him. As the race entered the final ten laps, the tides started to turn, as Phelps fell off the back bumper of Sears, while Sears slowly chipped in on Wight’s lead.


While Sears slowly closed in, it was too little too late, as Larry Wight grabbed his second Brewerton checkered flag of the season. Tom Sears Jr. got second, followed by Jimmy Phelps, Billy Decker, and Chris Hile. With the win and Sears’ ignition issues, it was enough for Wight to grab his first Brewerton track championship.

“I think we waited a little bit too long to pull a new car out,” Wight said. “I hate to see Tim break like that, I really wanted to race it out with him and see how it would’ve played out. I think we finally found something this car likes, were really just doing a couple fine tunes here and there. This is the one place we haven’t been able to win a title at, we turned enough laps around here and had enough teammates win the championship that we needed to win one ourselves.”

Jonathan Preston dominated the first half of the first, regularly scheduled Empire Super Sprints main, ditching Billy VanInwegen in the early stages. Even after a mid-race restart, Preston pulled away, but as the lap counter ticked higher, VanInwegen got faster. With two to go, VanInwegen got under Preston, and did so again on the last lap, but couldn’t get the pass done. Preston grabbed the win, with VanInwegen a few feet back, and Danny Varin only a carlength behind him.

The second feature was a makeup from a show that was rained out earlier this month, and Jeff Cook led in the carnage-filled early stages. Preston obviously had the hot setup on the night, getting the lead from Cook on lap 14, bringing Matt Tanner along with him. Once out front, Preston powered down and drove away from Tanner and Cook to grab his second win of the evening in a race that saw just eight cars finish.