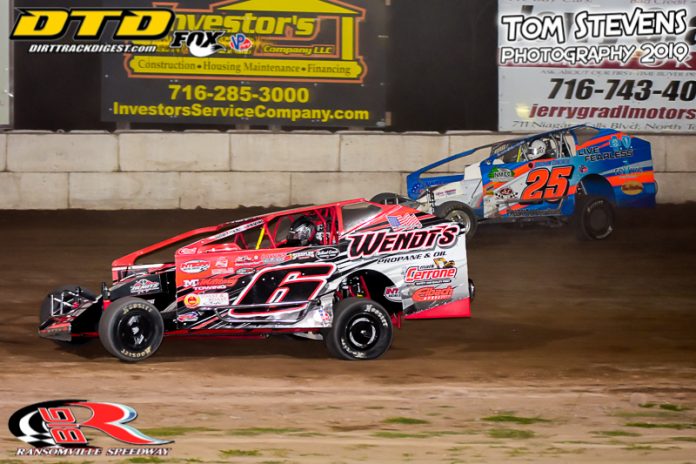 Mike Bowman and Mike Williams were on the front row for the Krown Undercoating Modifieds feature with Bowman showing the way. Erick Rudolph would take over third early and would go after Chad Brachmann for second place as Mat Williamson and Ryan Susice raced in the top five. Allan Wills spun in turn three to bring out the races first caution on lap eight. On the restart, Mat Williamson moved into second away from Brachmann and would go after race leader Mike Bowman.  The leaders would hit lap traffic at the halfway mark as Bowman, Williamson, and Rudolph would pull away from the rest of the field. Gary Lindberg would hit the turn three wall to bring out the caution on lap 24. On the restart, Williamson would take the lead away from Bowman as Ryan Susice moved up and would take third position away from Rudolph. Williamson checked out on the field and would go on to score the feature win. Erick Rudolph won his second straight track title by 17 over Williamson.

Kevin Wills and Garrison Krentz led the Investors Service Sportsman to the green flag for their 25-lap main event with Krentz showing the way. Krentz continued to show the way as Kyle Inman raced in second. Inman would take lead away from Krentz on lap six and would open up his lead over the balance of the field. Derek Wagner would challenge Krentz for second place as defending divisional champion Brett Senek raced in sixth place. Senek would move around Noah Walker to re-enter the top five at the halfway mark. Senek would pass Robbie Johnston to take over fourth place with six laps remaining. Inman would pull away to score the win, his third of the season. Dave DiPietro won a Hoosier Tire during a drawing post-race.

Bubby Pawlak and Kyle Richner brought the Stevenson’s Hardware Novice Sportsman to the green flag for their final points main event with Pawlak jumping into the lead. Off a lap three restart, Pawlak would reclaim the lead as the race was on for the points title as Butch Zimmerman and Mike Martin battled for position. Martin would move into third with Zimmerman racing in fourth. Zimmerman led Martin by two points going into Championship night. The late race restart would see Pawlak still leading Sam Junkin with Martin and Zimmerman racing in third and fourth. Pawlak would go on to score the feature win. Jordan Moden received a Hoosier Tire post-race.

“Showtime” Jaren Israel and Pat Dell set the pace in the KiPo Motors Street Stocks feature event with Israel showing the way with Dell and Pete Stefanski racing in second and third. The top three would go three-wide for the lead with Stefanski and Dell clearing Israel, who suffered front end damage. Israel would pull into the pits to bring out the races first caution on lap four. Stefanski would take the lead away on the restart as Cory Sawyer moved into third place. Sawyer would clear Dell to move into second on lap five and would start to go after Stefanski. Stefanski would pull away to score the feature win.


Steve Matson and Dave Dussault led the Gippsters Collision Mini Stocks to the green flag for their feature event with Dussault showing the way with Mike Kramarz and Chuck Cala racing in top three. Kramarz would take over the lead on lap five with Cala, Matt Hornquist, Nick Tarnowski, and Dussault raced in the top five. Hornquist would catch and pass Kramarz for the lead on lap 11 and would start to pull away and would go on to score his first victory of the season.

The 4d of Danny Myto, Joe Hallack, and Austin Wilson were the top three remaining in the Triple T Auto Demolition Derby. Myto was declared the winner.

NEWS AND NOTES: 76  cars signed in pitside. Makenna Quarantillo performed the national anthems. Triple T Auto Parts presented the Labor Day Weekend Demolition Derby. The go-kart division at the Little R is holding their annual raffle to benefit the drivers point fund. The raffle will be held at their end of the season fun race and banquet on September 8. Suites are still available for King of the Hill Weekend. Contact the speedway office for more information.

Barker Lions Club will present the Sportsman Super DIRTcar Series 50 next Friday, September 6. The 358 Modified Tour will also make their first appearance at the Big R with the KiPo Motors Street Stocks and Gippsters Collision Mini Stocks will round out the racing card. Pit gates will open at 5pm with grandstands opening at 6 with racing getting underway at 7:15pm.